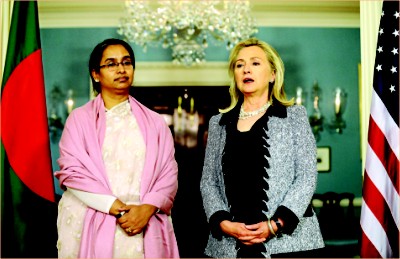 US Secretary of State Hillary Clinton speaks to the media after her meeting with Bangladesh Foreign Minister Dipu Moni at the Department of State in Washington Wednesday.Photo: AFP

At her first meeting with Bangladesh Foreign Minister Dipu Moni in two years, US Secretary of State Hillary Clinton has conveyed her country's concern over the Nobel Prize-winning Grameen Bank and the removal of its reputed managing director Prof Muhammad Yunus.
In remarks before the meeting formally got under way on Wednesday at the State Department in Washington, Clinton urged that the Grameen Bank be allowed to work productively on behalf of the people of Bangladesh, according to a press release of the State Department.
"And, of course, we have expressed directly to the government our concern and hope that the Grameen Bank, which was well recognised by the world, particularly with the Nobel Prize for what it's done to help alleviate poverty, is able to continue to function productively on behalf of the people of Bangladesh," said Mrs. Clinton.
Yunus' removal from the Grameen Bank he had founded to raise the quality of life of Bangladesh's poor sparked criticism at home and abroad. The government defended its action by saying that Yunus had been fired for violating the country's retirement rules.
The US secretary of state also urged the Bangladesh government to ensure that media outlets were able to exercise freedom and that NGOs had the opportunity to be a vibrant contributor to the future of Bangladesh.
In her response, according to the State Department press release, Dipu Moni said Bangladesh, as a secular democratic country, was home to a free and robust media and a very vibrant civil society.
And with regard to Grameen, the Bangladesh minister told her American counterpart that as a statutory body, Grameen enjoyed all rights and privileges. She stated that the Bangladesh government was proud and so was the country “that we have a Nobel-winning institution. And we believe firmly, firmly believe, that it will continue to do the job that it is supposed to do with a lot of success."
During the meeting, which lasted 45 minutes, Dipu Moni raised a number of issues, including the extradition of Bangabandhu's killers from the US, trial of the 1971 war criminals, duty-free access for Bangladeshi products, Grameen Bank, freedom of press and climate change.
She informed Mrs. Clinton that it was extremely important for Bangladesh to hold the trial of those who had murdered the Father of the Nation Bangabandhu Sheikh Mujibur Rahman and most of his family members in order bring to an end the culture of impunity which prevailed in the country for more than thirty-four years.
The Bangladesh foreign minister mentioned that of the six fugitives from justice, AM Rashed Chowdhury had been living in the US. She sought Washington's cooperation in the repatriation of the self-confessed killer to Bangladesh in the interest of upholding justice.
Responding to Dr. Dipu Moni's comments, Mrs. Clinton said the issue had been under judicial process and assured her that the State Department would look into it, said a foreign ministry press release.
On the issue of the war crimes trials in Bangladesh, the secretary of state expressed her satisfaction with the meetings US ambassador-at-large for war crimes Stephen Rapp earlier had with the Bangladesh authorities and hoped that the trials would be conducted in conformity with international standards.
Dipu Moni also urged the US side to enable duty-free access for Bangladeshi products into the American market. She also pointed to the need for a rectifying of excessive tariff. She sought Mrs. Clinton's help in including Bangladesh under the Millennium Challenge Corporation (MCC) since the country was eminently qualified for it.
Seeking Washington's cooperation in climate change mitigation, particularly in the matter of funding and transfer of green technology by the US, she said Bangladesh had been taking necessary steps to face the threat of climate change. The Bangladesh government, she said, had created a fund of $300 million for adaptation programmes.
Welcoming the Bangladesh foreign minister to Washington, Hillary Clinton underscored the importance of US relations with Bangladesh, a secular, Muslim majority democracy.
She appreciated the various initiatives undertaken by the government of Prime Minister Sheikh Hasina, including interaction with countries in the South Asia region, particularly the initiative to address the outstanding issues with India.
"We want to work with Bangladesh and other countries in the area to promote regional integration so that there are greater economic opportunities, that many of the problems that prevent the free flow of commerce can be overcome so that the people of the entire region can prosper," Clinton said.
She assured Dhaka of continued cooperation in tackling terrorism. With regard to Bangladesh's request for facilities under MCC, she said the US side would work together with Bangladesh to that end.
Dipu Moni extended an invitation to Mrs. Clinton to visit Bangladesh. The secretary of state responded positively by saying she would like to visit Bangladesh next year. The foreign minister also extended, on behalf of the president and the prime minister of Bangladesh, an invitation for President Barack Obama to visit Bangladesh.
US Assistant Secretary of State for South and Central Asia Affairs Robert Blake, Bangladesh Ambassador to the US Akramul Qader and Foreign Ministry Director General (Americas) Muhammad Abdul Muhit were present at the meeting.