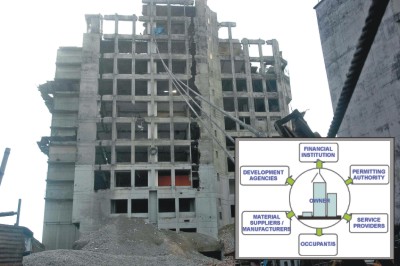 The limitations and failure of among others Rajdhani Unnayan Kartripakhya (RAJUK), Dhaka City Corporation (DCC) and its Ward Commissioners, Civil Aviation Authority (CAA), Dhaka Traffic Control Board (DTCB), Fire Service and Civil Defence, Dhaka WASA, Dhaka Power Distribution Company and its predecessors, and Department of Environment (not in that order or extent) in harnessing improper building activities have compelled ideas in the past to emerge from professionals seeking to ameliorate the rapid deterioration of our urbanscape.
Bangladesh's own building code was a great start in the early 1990s but BNBC 1993 failed to switch to a higher gear in over two decades, although efforts are on for a revised version dated 2010. Nor has the code been taken up in earnest by architects and engineers mainly due to the lack of a guardian to oversee its implementation, penalise violators and amend provisions in line with growth and technological developments. Indeed any professional engaged in the building industry will tell you that the BNBC 1993 was made a law in 2006, and then in all probability smirk at its ill and orphaned state.
The stipulation of a One Window Service Cell for the benefit of building owners and developers under Dhaka Metropolis Building Construction Rules 2006 stumbled on commencement and was removed from the now effective 2008 Rules, primarily because the small windows could not become the big Window. The 2008 Rules require four stages of clearance and is overseen by at least three statutory committees.
Engr. Syed Azizul Haq, PEng., argues in favour of a Building Regulating Office to coordinate owners, design professionals, developers, contractors, service providers, building material manufacturers and suppliers, financiers, and occupants with a bid to making the built environment more liveable, better constructed, well maintained and serviced by latest information appropriate for our economy and land. The author however stops short of calling the proposed office an 'authority', one would assume not to upset prevalent authorities (some toothless by choice), and yet that is what is most lacking in our collective desire to impose our home-grown building code.
The code is seeking a guardian and should be granted one.

The author is CEO, GERAMfERA and Consultant to the Editor on Urban Issues