Railway on the wane 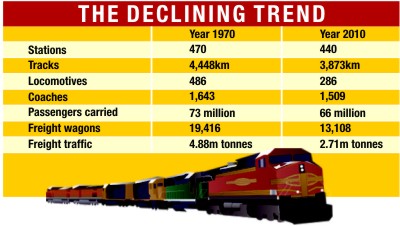 The capacity of Bangladesh Railway (BR) has been dwindling since the independence of the country despite the fact that the demand for rail service is growing.
Successive governments' apathy to the sector has made the once reliable mode of transport nearly as unsafe as all other means of road transport. In 2010 alone, there had been a staggering 403 derailment of trains.
Official records show trains used to carry more passengers and freight than did the vehicles on road a couple of decades ago. But the railway's share of carriage has now reduced to just nine percent while that of passengers to four percent.
This is the situation when the country's population doubled and mobility increased by several folds over the last four decades.
“People press for more train stoppages at various district towns every day. They submit memorandums and organise rallies to make their voices heard,” said BR Director General Abu Taher, adding, “But unfortunately, we are unable to address these problems due to poor allocation in the sector.”
BR operates 283 passenger trains in 44 districts while there is no railway service in 20 other districts.
Half of these trains cannot follow their schedules due to frequent derailment or some other reasons, an official of operation department said.
“The shabby condition of most of the rail tracks causes derailment while the locomotives are too old to drag coaches and wagons,” a senior railway official observed.
He said most of the locomotives are four decades old when the average lifespan of a locomotive is 20 years.
This has pushed travellers to depend heavily on road services, which is a reason for frequent accidents and deaths. This situation can be avoided through massive investment and extension of railway, according to many railway officials.
Communications Minister Syed Abul Hossain said, “The demand for rail service is immense, but the railway is simply unable to take the huge load.”
However, this situation did not happen just due to fund crunch or inept management of the railways. The BR has also been suffering due to the fact that the government did not increase train fare since 1992.
Officials say that over the decades the government invested miserly on the maintenance of the existing tracks, installing new tracks and purchasing new engines and coaches.
During this period, the railway lost hundreds of kilometres of tracks and many stations.
According to the railway boss, a good number of projects are being implemented to reform the sector and improve its service. However, the fund shortage still remains the main concern.
Under the projects, worn-out tracks will be rehabilitated, new tracks will be constructed, single tracks will be upgraded to double tracks, signalling system will be improved, stations will be modernised and coaches, wagons and engines will be purchased in next three years.
The achievements
The addition of rail tracks along the bridge on the river Jamuna in 1998 was the major success for BR as it established rail link between the country's eastern and western regions. A total of 23 trains now operate through the bridge every day.
In addition to that, introduction of an express train between Dhaka and Lalmonirhat in 2004, recent inauguration of another intercity train service between Rangpur and Dhaka and resumption of the Maitree train service between Dhaka and Kolkata in 2008 are a few gains of BR.