Adrenaline in the nervous system

Charles R. Larson is impressed by a writer's courage 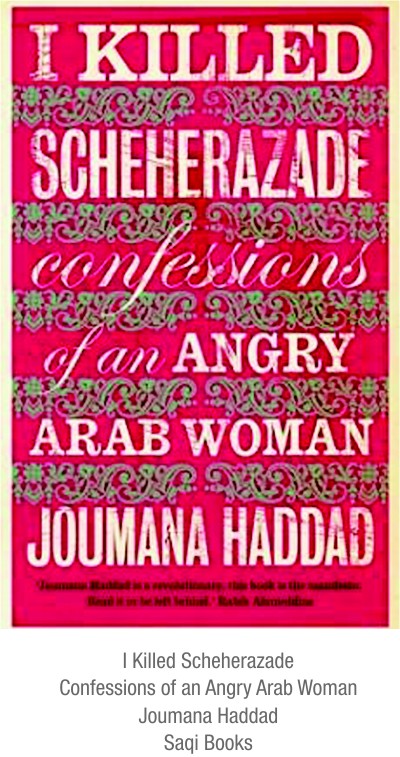 lthough a skinny little book, Joumana Haddad's treatise on being a writer/editor in Lebanon packs a wallop, controversial in all environments: Haddad's own country, certainly throughout the Middle East, and also in the West. Intentionally designed to hit you in the face, I Killed Scheherazade might best be examined by quoting a passage almost at the end of the volume:
"I've never been a big fan of Scheherazadewho, to make matters worse, is nauseatingly cherished by the Orientalistseven though I really loved reading and re-reading The Arabian Nights. Her character, I am convinced, is a conspiracy against Arab women in particular, and women in general. Obviously, the poor lady did what she had to do. I am not judging her for that. In fact, I might have very well done the same, had I been in her delicate position. I've had just enough people (especially in the West, but in the Arab world as well) turning her into a heroine, the symbol of Arab cultural female opposition and struggle against men's injustice, cruelty and discrimination. She's just a sweet gal with a huge imagination and good negotiation skills. Things simply needed to be put in their right perspective.
Thus, I killed her."
Angry at the way Arab women have been portrayed, Haddad launched Jasad (The Body) in Beirut, an erotic magazine in Arabic, which confronted issues of battered women, masturbation, transsexuality --- and, surprisingly, was not censored in spite of screams of outrage. "Being an Arab today," Haddad writes, "means you need to be a hypocrite. It means you cannot live and think…. It means you are split in two, forbidden from speaking the blunt truth…because the Arab majority depends upon a web of comforting lies and illusions." But the passage gets even more controversial: "It means that your life and your stories must be repressed, clamped-down and encoded; rewritten to suit the vestal guardians of Arab chastity, so the latter can rest assured that the delicate Arab 'hymen' has been protected from sin, shame, dishonor or flaw."
Obviously strong stuff. Note that I Killed Scheherazade is not a translation from Arabic into English. The copyright page lists no earlier edition in the Middle East prior to the English edition, published in London and soon in the United States. So, even if Haddad's Arabic magazine discusses controversial subjects, it is quite probable that this book could not have been published in Beirut, in spite of the city and the culture's liberalism vis-à-vis most of the Arab world.
Haddad was fortunate to grow up in Lebanon and not a country like Saudi Arabia. Second, the uniqueness of her own childhood provided her with an exposure to a world not typically Arab. Her family is Christian, not Muslim, and her father's library contained a number of books not often found in Arab households. Haddad remarks, "In the earlier stages of my life [age twelve], I used to think that only two things were worth doing whenever I had the chance of being alone: reading and masturbating." The books in her father's library helped, especially discovering a copy of de Sade's Justine, or the Misfortunes of Virtue. "That book pumped adrenaline through my nervous system." Other books included Lolita and Sexus.
Haddad notes that erotica (such as The Perfumed Garden, by Sheikh Nefzawi) was consumed by Arabic cultures in the fifteenth century, but restrictions against such works (and the treatment of women in general) came about more recently as conservatism gained its dominance. Of the Arab custom permitting the marriage and the abuse of very young girls, for example, Haddad refers to the revered Ayatollah Khomeini, and a passage from his book, Tahrir al-Wasila:
"A man is not to have sexual intercourse with his wife before she is nine years old, whether regularly or occasionally, but he can have pleasure from her, whether by touching or holding her, or rubbing against her, even if she is as young as an infant. However, had he penetrated her without deflowering her, then he holds no responsibility towards her. But if a man penetrates and deflowers the infant […], then he should be responsible for her subsistence all her life." [Ellipsis in original].
That pretty much gets to the core of the matter. Haddad states, "To be a woman writer in an Arab country means to impose strict self-censorship, a thousand times harsher than any official censorship imposed from outside." But she will have none of it --- self-censorship or governmental.
I Killed Scheherazade is a bold manifesto, but the question is: "How many Arab women will read it?" Ditto, "How many Arab men will pay attention?"