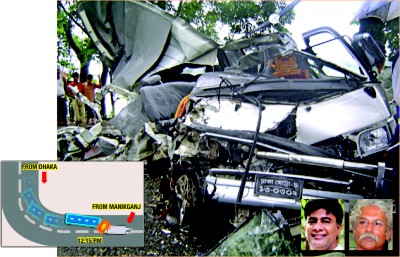 Noted filmmaker Tareque Masud, media personality Ashfaque Munier Mishuk and three others died yesterday in a fatal road crash on Dhaka-Aricha highway in Manikganj, sending shockwaves through the nation.
Tareque's wife Catherine Masud, painter Dhali Al Mamun, his wife Dilara Zaman Jolly and film production staff Saidul Islam were injured in the accident. They are now receiving treatment at the Square Hospital in the capital.
The wounded are now out of danger, said Syed Modasser Ali, health adviser to the prime minister.
The microbus carrying the team to Manikganj town collided head-on with a bus on the Dhaka-Aricha highway at Ghior in the afternoon. The team was on its way to meet the Manikganj deputy commissioner for permission to shoot for Tareque's latest project “Kagojer Phool” after visiting a shooting spot in Shibalaya upazila.
Police found the bus 40-50 yards off the spot.
Film production crew Wasim and Jamal, and microbus driver Mostafizur Rahman are among the dead.
Bodies of Tareque Masud and Chief Executive Officer of ATN News Ashfaque Munier, popularly known as Mishuk Munier, would be taken to the Central Shaheed Minar at 10:30am today for people to pay last respects, said Nasiruddin Yusuf Bachchu, president of Sammilita Sangskritik Jote.
Body of Mishuk will be brought to ATN News office at Karwan Bazar at 10:00am today, reported the private television station.
Their bodies were kept at the mortuary of Bangabandhu Sheikh Mujib Medical University.
Rois Uddin, officer-in-charge of Ghior Police Station, told The Daily Star that a Chuadanga-bound bus from Dhaka collided with the microbus travelling to Manikganj town in Joka area at about 12:15pm.
The bus left Dhaka with nearly 50 passengers after 10:30am. It was travelling at high speed when it hit the microbus coming from the opposite direction, said several passengers of the bus.
“The passengers told us that they could hardly see anything outside as it was raining heavily at that time,” said Noor-e-Alam, assistant superintendent of police of Shibalaya Circle.
The driver did not slow down the bus even before taking a left-turn in Joka area. It hit the microbus at high speed after travelling about 10 yards from the turn. Half of the microbus was smashed on impact.
“I saw five bodies tangled in the wreckage. The wounded were trying to crawl out of it,” said 70-year-old Bomkesh Sarker, who lives just 15 yards off the scene.
Locals rushed there to rescue the victims and one of them informed police about the incident.
Catherine Masud, painter Dhali Al Mamun and his wife Dilara Zaman were whisked off to Manikganj Sadar Hospital at about 12:45pm.
They were later taken to the Square Hospital in the capital.
The five bodies were first taken to Manikganj Sadar Hospital morgue at 2:00pm and then to Dhaka Medical College morgue around 6:00pm.
Bodies of Wasim, Jamal and Mostafizur have been handed over to their respective families, mentioned Nasiruddin Yusuf Bachchu.
The bus driver left the vehicle with passengers 40-50 yards off the spot after the accident.
“The bus staff fled the scene leaving the vehicle,” said Noor-e-Alam.
Police seized the bus and took it to Borongail police outpost.
The bus driver, Jamir Uddin, is from Daulatdiar village in Chuadanga, reports our Kushtia correspondent.
Bus owner Mujibul Haque Khokon said Jamir has been driving bus for three decades and working for him for the last two years.
Khokon claimed that he lost contact with Jamir after the accident.
“If I manage to contact Jamir, I'll ask him to surrender,” he said.
Meanwhile, President Zillur Rahman, Prime Minister Sheikh Hasina, Leader of the Opposition Khaleda Zia, and leaders of socio-cultural organisations expressed deep shock at the deaths.
The communications ministry formed a three-member committee, headed by Arifur Rahaman of Roads and Highways Department, to probe the accident, reports UNB.
The committee has been asked to submit report in a week.