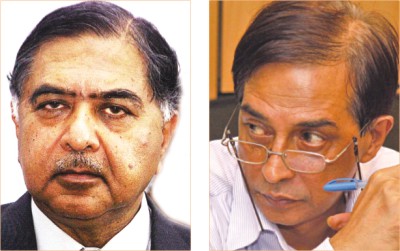 Eminent citizens on Sunday at a discussion meeting suggested that a "people's commission" be formed comprising jurists and civil society leaders to resolve, what they said, a crisis that arose following the 15th amendment to the constitution.
Sharply criticising the 15th amendment, Dr Kamal Hossain and Shahdeen Malik said the government committed a "despicable offence" by going against the fundamental rights of the people.
The discussants comprising constitutional experts, jurists, politicians, and leaders of the civil society also observed that the latest amendment to the constitution created instability in the society, and another 1/11 like situation might be created in the country if the crisis is not resolved.
Takeover of state power by a military backed caretaker government and declaration of a state of emergency on January 11, 2007 is popularly known as the "incident of 1/11".
Organised by Shushasoner Jonno Nagorik (Shujan), a platform of the civil society, the roundtable titled "Constitution (Fifteen) Amendment and Its Significance" was held in National Press Club in the capital,
The parliament on June 30 passed the 15th amendment to the constitution abolishing the caretaker government system, allowing general elections under elected partisan governments.
The BNP-led main opposition, some smaller components of the ruling alliance, some other political parties, and many eminent citizens sharply criticised the abolishment of caretaker government system, saying it will throw the country into a political confrontation.
The 15th amendment also imposed a ban on amending the constitution's preamble and its basic structure.
In Sunday's meeting the eminent citizens decided that a panel of jurists will go to the High Court if necessary to resolve the crisis.
They said the constitution was amended through a one-sided, opaque, and unbelievably fast process, so the government should now re-amend the constitution to resolve the crisis that has been created through the process.
"The fundamental rights of the people were made unchangeable by the new amendment, the path to increased rights of the people have been blocked by it," said Shahdeen Malik.
Echoing Malik, constitutional expert Dr Kamal Hossain said the amendment limited the people's freedom of speech and their ownership on the constitution, by incorporating some new clauses.
Dr Kamal said the people are the owners of the constitution and the country, and they have the absolute power over the constitution and the country, but now by amending the constitution the people's representatives are saying the people are not the owners.
"They [people's representatives] are culpable of committing the most despicable of offences," commented Dr Kamal.
Shahdeeen Malik said the government created new problems instead of plugging the existing loopholes in the constitution.
"I felt very bad following the amendment, I am honestly saying that I feel like crying. The latest amendment marginalised a very good constitution. Restoration of secularism and recognition of the historic liberation struggle are two of the good things that happened through this amendment, but many other bad things also were included," said Malik.
Since the amendment made sections of the constitution unchangeable, good laws like for protection of the environment or for child education, will not be includable anymore, Malik said.
"Whose head produced such absurd ideas, I wonder," he added.
The discussants questioned how the government could scrap the caretaker government system without getting the full text of the judgment of the apex court on the 13th amendment.
They called upon both the opposition and the government to resolve the debate centring the scrapping of the caretaker government system, through discussions.
M Hafizuddin Khan, Badiul Alam Majumdar, Syed Abul Maksud, Prof Asif Nazrul, Mahmudur Rahman Manna, Ruhin Hossain Prince, ASM Abdur Rob, and Mizanur Rahman Khan also spoke among others.