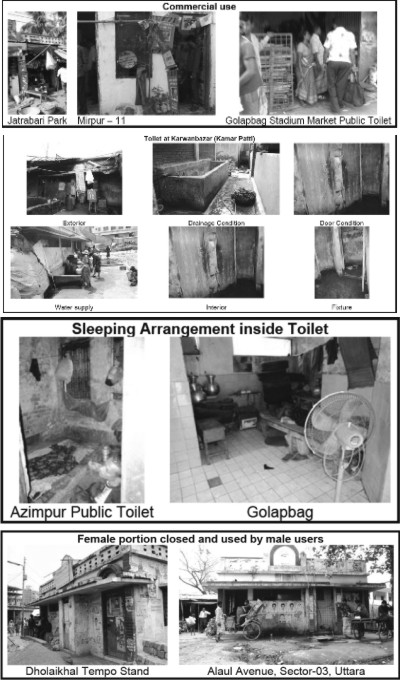 Today's piece is the second and concluding part of a report filed by Centre for Urban Studies and WaterAid in Bangladesh on public toilets in Dhaka city.
Of all the civic amenities supposed to be available and provided in a city by its managers, traditionally called fathers (no wonder they afford so little for women), public toilets demand a significant position because of physical needs and social circumstances; dare I mention quality of life.
The role of Dhaka City Corporation, which is entrusted by law to provide separate toilets for both men and women in the capital (as are paurashavas at towns) cannot be overemphasised, nor appreciated given its long-enduring laissez-faire attitude. There are simply too few, and the nearly fifty open toilets that do exist care not much for women nor for sanitary conditions; the less said about continual water supply the better.
In a city where over fifty lakh people are without proper toilet facilities, the two hundred or so paid latrine and/or urinal fixtures in the about fifty establishments will remain for them a beyond-reach luxury. Open areas are their only option; parks, pavements, waterside, and any quiet area (hard to find though) remain their points of relief and sources of mal-hygiene for the city.
The other fortunate half of the populace, those who have toilets in their homes and offices, also require facilities in public places during shopping, working and running errands; but such conveniences are hard to get hold of, and uncertain. Definite though is DCC's inability to offer the service even if symbolically so.
We are expecting our two-episode serial to be a wake-up call for all, particularly the DCC.

The author is Consultant on Urban Issues to the Editor.