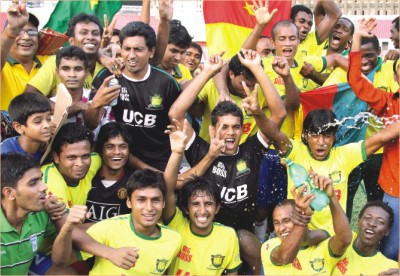 NEW WINNERS AT LAST: The victorious Sheikh Jamal team celebrate winning the Bangladesh League title after drawing their last match 2-2 against Brothers Union at the Bangabandhu National Stadium yesterday. Their victory is a change from the usual dominance of Abahani, who have won the previous three editions.Photo: STAR

A new league champion was crowned yesterday as debutants Sheikh Jamal Dhanmondi Club wrapped up the coveted title of professional champions in the last game of the season with a 2-2 draw against Brothers Union in their Grameenphone Bangladesh League fixture at the Bangabandhu National Stadium yesterday.
The result meant that the star-studded Sheikh Jamal went out of reach with 51 points from their stipulated 22 matches, four points clear of Muktijoddha Sangsad who have a match in hand against Farashganj MFS. Although they have no chance of an overhaul, the Reds are guaranteed to finish second after three-time champions Abahani lost to Sheikh Russel on Tuesday.
It also meant that a new name will be etched in the history of professional football after Abahani had won all the previous editions of the Bangladesh League.
In the match yesterday, Nigerian Kingsley Chigozie put Brothers ahead in the 12th minute only to see his effort cancelled by Mohammad Sujan through a spot-kick in the 62nd minute. Cameroonian Sergio Fils Chico gave Sheikh Jamal a lead three minutes later through a header but yet again Brazilian Everton leveled the margin in the 74th minute through a spot kick.
And although the match ended on a draw it could not stop Sheikh Jamal from celebrating their maiden triumph in their first appearance in the professional football league, despite the fact that the Dhanmondi-based outfit has the displeasure of match-fixing allegations hanging over them.
From the off, Sheikh Jamal was under huge pressure of earning at least a single point against Brothers after they beat them 2-1 in the first leg and the pressure was evident when Sheikh Jamal went down in the 12th minute.
Everton worked hard on the left flank to release a through-pass for Faisal Mahmud who then pushed the ball inside the danger zone for Kingsley to fire home to silence some 2000-strong Sheikh Jamal crowd, who turned the Western Gallery, known as Abahani gallery, yellow.
Sheikh Jamal badly felt the absence of their suspended forward Emmanuel Ayuk and midfielder Yoko Samnick as well as sick defender Ariful Islam but they had began to re-ogranise to control the game and launched attacks as the Brothers defenders looked reluctant to clear the ball from the danger zone.
Sheikh Jamal almost found the equalizer in the 23rd minute from a goal-mouth-melee but defender Nahidul Islam made a goalline save off a tap by Chico while goalkeeper Aminul Haque kept Sheikh Jamal in hunt after foiling two good attempts by Kingsley just before the break.
After the resumption, Packeer Ali sent on local striking duo Zahid Hasan Emily and Enamul Haque to sharpen the attack and the new champions created huge pressure on Brothers to earn the equalizer.
The pressure paid off after Brothers defender Ashraful Kabir handled the ball inside the box to award a spot kick in the 62nd minute and former national defender Sujan beat goalkeeper Uttam Kumar with a powerful drive to level the margin before Chico rose high to nod a Femi Orunnimi cross home to provide Sheikh Jamal a lead in 65th minute.
Brothers again bit back after earning a penalty kick when Wali Faisal brought Everton down inside the box and the Brazilian converted the spot kick in the 74th minute.
With the score tied at 2-2, Sheikh Jamal strengthened the backline sending on Minthu Sheikh in place of hitman Chico to pass the rest of time without any trouble.
“It was a hard game for us as we missed the services of three key players but I am happy at the way the boys fought despite conceding a lead,” said Sheikh Jamal coach Packeer Ali.
“They (Sheikh Jamal) were under pressure in the first 15 minutes and we availed that chance to go ahead but failed to keep the momentum when they had re-organsied to pressure us,” said Brothers coach Wasim Iqbal.