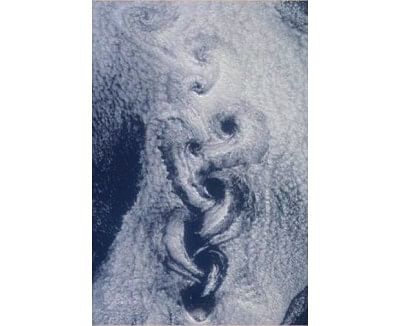 A phenomenon called von Karman vortices in clouds. The vortices are similar to those that form in superfluids.

It has been 100 years since the discovery of superconductivity, a state achieved when mercury was cooled, with the help of liquid helium, to nearly the coldest temperature achievable to form a superfluid that provides no resistance to electrons as they flow through it.
During that century, scientists have struggled to find a precise mathematical explanation of why and how this strange fluid behaves as it does. Liquid helium-4 itself becomes a superfluid when cooled to within a few degrees of absolute zero on the Kelvin scale (minus 273 Celsius or minus 460 Fahrenheit), and the resulting lack of viscosity allows it to seem to defy gravity, flowing up and over the sides of a container.
Now a team led by a University of Washington physicist, using the most powerful supercomputer available for open science, has devised a theoretical framework that explains the real-time behavior of superfluids that are made of fermions -- subatomic particles such as electrons, protons and neutrons that are basic building blocks of nature.
Such superfluids are found in neutron stars, which rotate between one and 1,000 times a second. These stars, also called pulsars, have 50 percent greater mass than the sun but are packed so densely that one can occupy an area only about the size of a city such as Seattle, said Aurel Bulgac, a UW physics professor and lead author of a paper in the June 10 edition of Science that details the work.
As a neutron star rotates, the superfluid on the surface behaves quite differently than a liquid would on the surface of Earth. As the rotational speed increases the fluid opens a series of small vortices. As the vortices assemble into triangular patterns, the triangles build a lattice structure within the superfluid.
"When you reach the correct speed, you'll create one vortex in the middle," Bulgac said. "And as you increase the speed, you will increase the number of vortices. But it always occurs in steps."
Similar behavior can be recreated in a laboratory using a vacuum chamber and a laser beam to create a high-intensity electrical field that will cool a small sample, perhaps 1 million atoms, to temperatures near absolute zero. A "laser spoon" then can stir the superfluid fast enough to create vortices.
In trying to understand the odd behavior, scientists have attempted to devise descriptive equations, as they might to describe the swirling action in a cup of coffee as it is stirred, Bulgac said. But to describe the action in a superfluid made of fermions, a nearly limitless number of equations is needed. Each describes what happens if just one variable -- such as velocity, temperature or density -- is changed. Because the variables are linked, if one changes others will change as well.
The challenge, Bulgac said, was to formulate the proper mathematical problem and then find a computer that could work through the problem as the number of variable changes reached 1 trillion or more. To reach its solution, the team in the last year used the JaguarPF computer at Oak Ridge National Laboratory in Tennessee, one of the largest supercomputers in the world, for the equivalent of 70 million hours, which would require almost 8,000 years on a single-core personal computer (JaguarPF has nearly a quarter-million cores).
"This tells you the complexity of these calculations and how difficult this is," he said.
The researchers also found through their calculations that by increasing the speed at which the fluid was stirred, eventually it would lose its superfluid properties -- though not as soon as had been previously hypothesized. Video representations of the results of the massive numerical simulations are athttp:// www.phys.washington.edu/ groups/qmbnt/UFG.
The work means that researchers can "to some extent" study the properties of a neutron star using computer simulations, Bulgac said. It also opens new directions of research in cold-atom physics.
"This is a pretty major step forward in studying these dynamic processes," he said.
Co-authors are Yuan-Lung Luo of the UW, Piotr Magierski of the Warsaw University of Technology in Poland; Kenneth Roche of the Pacific Northwest National Laboratory in Richland, Wash.; and Yongle Yu of China's State Key Laboratory of Magnetic Resonance, Atomic and Molecular Physics. Magierski and Roche also have affiliate UW physics appointments.
The research was funded by the U.S. Department of Energy, the U.S. National Science Foundation, the Polish Ministry of Science and the Chinese National Science Foundation.