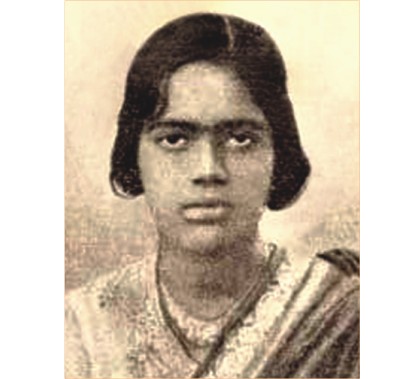 Today is the 100th birth anniversary of Pritilata Waddedar, the illustrious anti-British revolutionary from Bengal, who sacrificed her life to liberate her motherland from the colonial rule in 1932.
Pritilata 100th Birth Anniversary Organising Committee will announce a countrywide programme to mark her birthday at Bengal Gallery, Dhanmondi at 11:00am today.
Born in Chittagong on May 5, 1911, Pritilata dreamed of freedom of her country from British rule.
In early 1930s she joined the armed resistance movement led by Mastarda Surya Sen who in 1932 planned an attack on Pahartali European Club.
On September 23, 1932, Pritilata was assigned to lead a team of 10-12 men that would attack the Club. The raid was successful but Pritilata, dressed as a man, was trapped.
She committed suicide by swallowing cyanide that the team was carrying and thus end her short endeavor in fighting for freedom of her country.