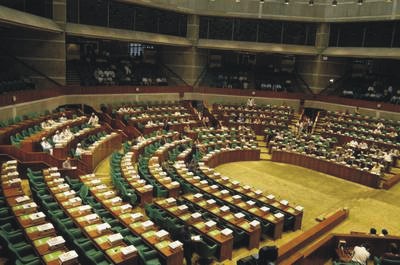 A Parliamentary committee on constitutional amendment has scrutinied the reprinted (draft) Constitution of Bangladesh. It is said that the Constitution will undergo the 15th Amendment in a month or two. Article 70 of the Constitution has both beneficial (in safeguarding against floor-crossing) and harmful (in making mandatory for MPs to always support the party position, right or wrong) provisions. Therefore, amendment to this article has becomean issue.
Article 70 has three clauses. I copy here clauses (1) and (3) for better understanding.
Clause (1): A person elected as a member of Parliament at an election at which he was nominated as a candidate by a political party shall vacate his seat if he resigns from that party or votes in Parliament against that party.
Explanation: If a member of Parliament-- (a) being present in Parliament abstains from voting, or (b) absents himself from any sitting of Parliament, ignoring the direction of the party which nominated him at the election not to do so, he shall be deemed to have voted against that party.
Clause (3): If a person, after being elected a member of Parliament as an independent candidate, joins any political party, he shall, for the purpose of this article, be deemed to have been elected as a nominee of that party.
Clause (1) of the Article has the provision for mandatory "vacating of his (or her) seat" on the ground of floor-crossing. It is understood that the main purpose of this article was to stop leaving of the position (government) or the opposition to join the other side for some gains. Thus, the purpose of this article was undoubtedly good for parliamentary practice. But unfortunately, Clause (3) allows an MP elected as "independent" to join any party. Therefore, all the provisions under this Article are not necessarily for good parliamentary functioning.
The first condition of mandatory vacating of the seat of a Member of Parliament (MP) is resignation from the party from which s/he had been elected. Resignation from the nominating party is obviously to join the opposite bench for some benefit, and usually the direction of crossing the floor, if allowed, would be to the stronger from the weaker party. Since the ruling party is often the stronger one, without this safeguarding clause many from the opposition would easily join it for personal benefit, disregarding the electorate's interest.
In case of marginal majority of the ruling party, finding the party getting weaker (regarding popularity), some MPs from the government party could also join the opposition, effecting a change in the government and thus jeopardising parliamentary democracy. Therefore, barring MPs from resigning is an essential provision. In the same count, Clause (3) requires revision to bar an independent MP (who is logically counted with the opposition) so that s/he can't join any political party (that would almost always be the ruling party).
The second part of Clause (1) includes "or votes in Parliament against that party." This part literally bars an MP from saying anything against the party, and thus the provision forces him/her to always support the party decision even if the MP concerned has strong reasons to oppose it, and even if the decision is actually wrong. Thus, the article, unfortunately, "domesticates" every MP to always clap for the party leader in our obliterated democratic practice where the problem is not refusal or protest but sycophancy and unquestioning bowing down to the wishes of either this or that leader.
To nurture the spirit of speaking the truth, the required protest against ill-designs of few politicians, and the refusal of unquestioned "obedience," MPs must have right to vote against his/her own party. In essence, the right of registering protest against the nominating party's bad stance is the minimum required democratic norm in the present democratic practice of Bangladesh.
It is well understood that an MP usually resigns from a party just to join another (for personal gain), but voting against the party is almost always out of question. Thus, after amendment, Article 70 (1) can read as: "A person elected as a member of Parliament at an election at which he was nominated as a candidate by a political party shall vacate his seat if he resigns from that party." But the part "or votes in Parliament against that party" should be repealed forthwith along with the explanation thereof under (a) and (b).
Besides, Clause (3) should also be repealed totally or be amended such that an "independent" MP, if s/he joins any party during the tenure of a Parliament (s/he must have right to join any party in completion of the Parliament in which s/he was elected as independent), must also vacate his/her seat.

The writer is a contributor to The Daily Star. Email: momas71@yahoo.com