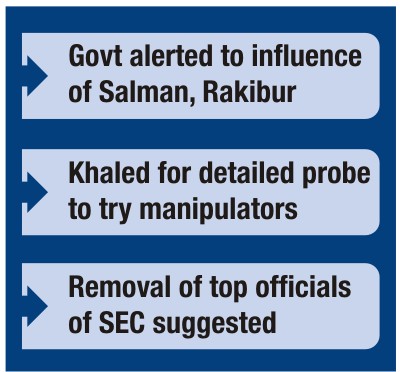 Some 60 individuals, many associated with Awami League and BNP, have made fortunes through stockmarket manipulations, found the probe into the recent share debacle.
Many of them can be tried under the existing laws of the Securities and Exchange Commission, Khondkar Ibrahim Khaled, who headed the probe, told The Daily Star yesterday.
He also said the government can publish the report including the names mentioned. This view runs counter to that of the finance minister, who said he would not make the names public until he is convinced about the allegations.
Arguing for disclosure, Khaled said in many cases suspects' names are published on the basis of first information report.
He, however, stressed the need for detailed investigations to bring them to trial.
The committee has warned the government high-ups against the influence of market players like pro-AL business tycoon Salman F Rahman and former DSE president Rakibur Rahman.
“The government must stay watchful so that Salman, Rakibur and other top market players cannot influence policymaking or appointments to the SEC through recommendations or lobbying,” said Khaled.
During the two-month investigation, the committee had talked to over 500 traders including all members of Dhaka and Chittagong stock exchanges, and also journalists, professors and researchers.
“We got the impression after talking to people,” said Khaled, also chairman of Bangladesh Krishi Bank.
He said though the committee has named the individuals as suspects, there are strong grounds for the allegations. The SEC, however, has to conduct further investigation.
“In the report, we have detailed how the regulator should conduct investigation,” Khaled said. “It [SEC] has to be completely restructured and its current leadership removed.”
Khaled's comments came a day after the four-member committee submitted its 320-page report to Finance Minister AMA Muhith.
The probe body also found involvement of opposition-linked influential businessmen and traders in the stockmarket debacle.
It observed that the SEC will remain ineffective and exposed to manipulations as long as the market players are able to influence the regulator.
The committee said Salman and Rakibur were named as suspects also in the probe report on the stock manipulation in 1996.
The investigation into the recent bourse debacle found their roles to be under widespread public suspicion.
There have been allegations that the two influenced the SEC and lobbied for the appointment of Ziaul Haque Khandaker as SEC chairman and reappointment of Mansur Alam as SEC member.
Salman lobbied the Bangladesh Bank governor to soften the central bank's stance on BD-Thai Aluminium that had been involved in money laundering, said the report.
Besides, he had links with overpricing of shares and overvaluation of assets of GMG Airlines and Unique Hotel, it said.
Salman and Rakibur exerted undue influence on the SEC and tarnished the government's image in the process, the report said.
When contacted, Salman, now in London, said he would return home soon and go through the probe report.
“Whatever I did in the stockmarket had the approval of the SEC,” said the influential businessman.
He could not find any reason why the probe committee has warned the government about him.
“I will look into the matter on my return home,” he said.
Rakibur, a DSE director, has denied the allegation of influencing the SEC in any way.
“I have no power to influence the SEC. Is there any proof that I influenced it?" he questioned.
The probe has found instances of fraudulence in omnibus accounts. It traced existence of several lakh shadow accounts that had been used as tools for trickery.
But the committee could not look into them properly for lack of adequate time. It however sampled some accounts and examined them.
The report said the shadow accounts shown as omnibus accounts with merchant banks did not reflect deposits and withdrawals properly.
Some of the accounts belong to former BNP lawmaker Mosaddeq Ali Falu, Unique Hotel and Resorts Ltd, former Awami League lawmaker HBM Iqbal, Muniruddin Ahmad, Roksana Amjad, Golam Mostafa, Ahsan Imam, Yakub Ali Khandaker, New England Equity Ltd, Md Lutfar Rahman (Badol) and Shoma Alam Rahman.
Khaled said: “Trading through beneficiary owner accounts had been transparent in the secondary market, thanks to Central Depository Bangladesh Ltd. But suspicious trading had been done from omnibus accounts.”
These omnibus accounts must be examined after reforming the SEC, said the former deputy governor of Bangladesh Bank.
The committee recommended that the government turn these omnibus accounts into beneficiary owners (BO) accounts, otherwise the SEC would block them.
When the stockmarket was on a bullish run, some individual accounts showed high levels of transaction. The individuals include Golam Mostafa, Abu Sadat Md Sayem, Yakub Ali Khandaker, Syed Sirajuddoula, Md Kholiluzzaman, Md Shahidullah, Arifur Rahman, and Shoma Alam Rahman, said the report.
The then SEC Member Mansur Alam had a pivotal role in legitimising the irregularities. The chairman is also responsible for the wrongdoing, as the commission's approval could not come without his consent, said the report.
Executive directors Anwarul Kabir Bhuiyan and Tariquzzaman were at fault for supporting the chairman and the SEC member. Many SEC officials took undue advantage under the shelter of these four top officials, according to the report.
“SEC Chairman Ziaul Haque Khandaker and executive directors Anwarul Kabir Bhuiyan and Tariquzzaman should be removed from the SEC and Mansur Alam should be investigated for irregularities,” the report said.
The government has cancelled the contractual appointment of Mansur for his involvement in irregularities.
The probe found that Roksana Akter, wife of Anwarul Kabir Bhuiyan, traded shares worth a huge sum from her four accounts in a breach of SEC rules.
Bhuiyan, however, claimed he was unaware of his wife's involvement in share business.
“My wife is not financially dependent on me. She might be involved in stock business,” he said.
Khaled said the SEC rules bar wife, children, parents or dependents of SEC officials from getting involved in share business.