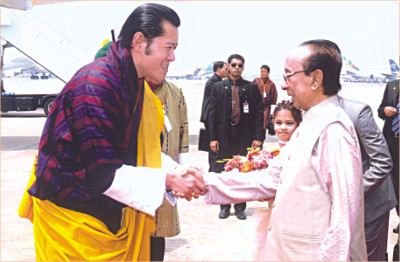 King of Bhutan Jigme Khesar Namgyel Wangchuck yesterday expressed firm conviction that the current engagements between Bhutan and Bangladesh would bring benefits to the peoples of the two friendly countries.
He also appreciated the initiatives taken by the prime minister of Bangladesh to strengthen and widen the relations between the countries which have brought substantial results.
The king stated this when Bangladesh Foreign Minister Dipu Moni called on him at Hotel Sonargaon yesterday evening after his arrival on a five-day state visit to attend the 40th Anniversary of Independence of Bangladesh.
Recalling the pivotal role of the Third King and the people of Bhutan for their unstinted support during the Liberation War of Bangladesh in 1971, Dipu Moni stated that the presence of the king is a fitting tribute and recognition of the contribution of Bhutan to the Liberation War of Bangladesh in 1971.
The king expressed his happiness to be able to visit Bangladesh particularly during this auspicious occasion.
The bilateral cooperative issues in the trade, connectivity, energy, education, climate change sectors came up for discussion during the call on.