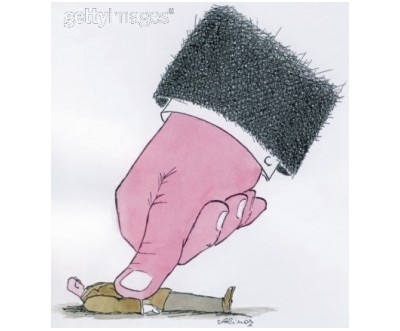 One definition of dictatorship, according to Webster's Dictionary, is "absolute power or authority" vested in one individual. So, if there is a government which gives -- officially or unofficially -- absolute power and control of all organs of government in the hands of one individual, it is by definition a dictatorship, even if the government is an elected one.
Dictatorship appears in different forms and characters in different societies. A dictator may be a monarch in one country, or an elected head of the government in another country. When it comes to kings and queens with absolute state power, there is no difficulty in identifying and characterising them as dictators, but recognising an elected head of the government as dictator is both tricky and controversial.
Take for example the case of Hosni Mubarak, the former Egyptian president. He had been elected to presidency numerous times over his nearly thirty-year rule in Egypt, the last time being in 2005 by more than 85% votes. Egypt also has a 444-member parliament -- known as People's Assembly -- elected every five years by public vote, and a cabinet headed by a prime minister who is chosen by the president himself.
So, apparently, one can argue that Hosni Mubarak was a democratically elected president according to the constitution of Egypt. But it would be very naïve to think that he, or rulers like him around the world, would let the government and the society run in true democratic spirit, upholding the rule of law and paying attention to the opinions and wishes of the people. Everyone in the world, except the hardcore supporters of Hosni Mubarak, knows what he was -- a dictator.
Now let us examine the case of our government and leaders. Since 1990, we have a parliamentary form of elected government. The parties which led the governments in turn over the last twenty years are Bangladesh Nationalist Party (BNP) and Awami League (AL), with the exception of two years of rule by the caretaker government from 2006 to 2008.
These two parties are headed by Sheikh Hasina (AL) and Khaleda Zia BNP). They come from two iconic families of Bangladesh and therefore the party council sessions meant to elect office bearers of these two parties are arranged by their supporters and sycophants in a way that would guarantee these two ladies the party chair positions in their respective parties.
Furthermore, the party chairs of AL and BNP are authorised by their party men to select and fire at will other office bearers of their parties. So, Sheikh Hasina and Khaleda Zia enjoy absolute power and authority in their respective political parties and have been exercising dictatorial authority for roughly thirty years now, contrary to the practices elsewhere in the democratic world.
According to our constitution, the prime minister is the chief executive of the government. The president appoints and fires the cabinet ministers upon recommendations from the prime minister. So, Ms. Sheikh Hasina and Begum Khaleda Zia, during their respective tenures, practically decide who will be in and out of the cabinet, and when.
Moreover, it is well known that no cabinet minister, out of fear for reprisal, dares to say or do anything that would displease Ms. Hasina or Khaleda Zia, even if it is of urgent national interest. In that sense, the two party bosses have absolute power and authority over the executive branch of the government, which fits truly into the concept and practice of dictatorship.
The leader of the Parliament -- the legislative branch of the government -- is another very important position, which has been held in turn by Sheikh Hasina and Khaleda Zia whenever their parties got majority seats in the Parliament. Just because the party chair can sack at will or send to obscurity any member of the party, an MP never dares to say anything that would be disliked by their party chairs. In other words, Mrs. Hasina or Begum Khaleda Zia have absolute power and authority over the Parliament when their respective party is in majority.
Some politicians in AL and BNP tried to reduce the dictatorial power of their supreme leaders, but in vain. Moreover, the so-called reformists of both parties earned so much wrath from their bosses that they have been either minimised in power or expelled from the party altogether by their party chiefs with unqualified support from opportunists and sycophants in their parties. In the process, the party bosses seem to have consolidated their power and strengthened their authoritarian grip more than ever before.
None of the present leaders of our political parties have the credibility, vision or integrity of character to lead the necessary democratic movement in Bangladesh. New leaders have to rise from among the people, earning their positions by virtue of their work.