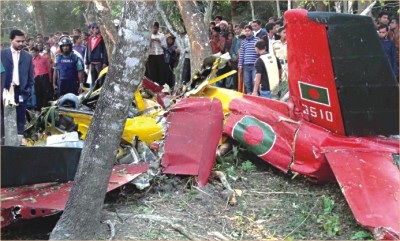 The wreckage of PT-6 aircraft that crashed near Barisal Airport yesterday.Photo: STAR

Two air force pilots were killed as the aircraft they were flying crashed near Barisal Airport yesterday.
Squadron leaders Ashraf Ibne Ahmed and Mahmudul Haque were on a PT-6 training aircraft of Bangladesh Air Force.
It went down at about 2:18pm to the west of Barisal Airport, an Inter-Service Public Relations (ISPR) press release said.
The pilots died on the spot.
A chopper took the bodies to air force base in Jessore after autopsies at Barisal Sher-e-Bangla Medical College and Hospital.
The cause of the plane wreck was still unknown.
Lt Col Manirul Huq of Rab, who was supervising the rescue, quoted air force sources as saying eight pilots on four planes took off from Jessore Airport at about 1:35pm.
Pair-4, the team of Ashraf and Mahmudul, lost contact with Jessore Airport control tower at 2:15pm and a few minutes later rammed into a rain tree with a bang.
Locals and fire service men rushed to immediate rescue.
Fazlul Huq, a farmer who was working nearby, said he saw two planes circling the skies. One of the aircraft suddenly swooped down and hit the tree.
Chief of Air Staff Air Marshal Shah Md Ziaur Rahman on a visit to the site told journalists a committee would look into the incident. He didn't go into detail.
Hailed from Comilla, Ashraf Ibne Ahmed was married to Shahnaz Jahan.
Mahmudul Haque was a Gazipur resident. He left behind his wife and an eight-month-old child.
President Zillur Rahman, Prime Minister Sheikh Hasina and Leader of the Opposition in the House Khaleda Zia expressed deep shock at the death of two pilots of Bangladesh Air Force, adds UNB.