Of the poor and the hungry 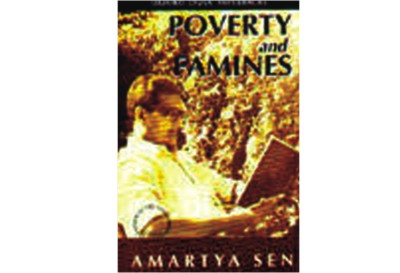 THE history of famines as well as of regular hunger is full of blood-boiling tales of callousness and malevolence. It isn't just regular starvation that one sees in 436 B.C., when thousands of starving Romans 'threw themselves into the Tiber'; or in Kashmir in AD 918, when `one could scarcely see the water of Vitasta (Jhelum) entirely covered as the river was with corpses;' or in 1333-7 in China when- we are told- four million people died in one region only; or in 1770 in India, when the best estimates point to ten million deaths; or in 1845-51 in Ireland, when the potato famine killed about one-fifth of the total Irish population and led to the emigration of a comparable number.
How severe is poverty? What causes famines? Amartya Sen, the Nobel Laureate from the Indian subcontinent, examines the problems of conceptualizing and measuring poverty, and discusses the specific problem of starvation in general terms in his widely acclaimed book 'Poverty and Famines' (Oxford India Paperbacks 1989; Twelfth Impression 2008). Sen undertook this study for the World Employment Programme launched by the International Labour Organization in 1969. It is concerned with the causation of starvation in general and of famines in particular. The method of analysis adopted is the 'entitlement approach', which concentrates on ownership and exchange. Later the author analyses the 'entitlement approach' in detail and applies it to four case studies of famines from different parts of the world. These four major case studies of famine are the Great Bengal Famine of 1941-43, the Ethiopian Famines, Drought and Famine in the Sahel and Famine in Bangladesh 1974.
'The official Famine Inquiry Commission reporting on the Bengal famine of 1943 put its death toll 'at about 1.5 million,' thus Amartya begins the sixth chapter of the book on the Great Bengal Famine. The economist then splits the economic experience of Bengal leading to and during famine into three phases, namely phase I (from the beginning of 1942 to March 1943), phase II (from March 1943 to November 1943) and phase III (from November 1943 through most of 1944). 'In 1942-43 cyclones and floods reduced the Bengal rice crop by about a third; this coupled with the absence of exports from Japanese-controlled Burma, and inadequate relief, led to famines, epidemics (malaria, cholera and smallpox), aggravated by widespread starvation,' Amartya cites from Census of India (1951) as well as also from the Census of Pakistan (1951) on behalf of his argument. We can further learn from accounts of Sen that the Bengal famine was essentially a rural phenomenon. Urban areas, especially Calcutta, substantially insulated from rising food prices by subsidized distribution schemes, saw it mainly in the form of an influx of rural destitutes. In the words of Sen, 'Calcutta saw the famine mainly in the form of masses of rural destitutes, who trekked from the districts into the city; by July 1943 the streets were full...unattended dead bodies could be found everywhere in the city- 3,363 had to be disposed of by relief organizations in October alone. The number of starving and sick destitutes in Calcutta estimated to be 'at least 100,000' in October 1943 (page 57).' Fishermen and agricultural labourers were among the hardest hit by the famine. Other hard-hit groups were 'other productive occupations,' 'non-agricultural labour' and 'craft.'
Chapter 7 of the book, titled 'The Ethiopian Famine (1972-74)', informs readers that the first recorded famine in Ethiopia goes back to the ninth century. Between 1540 and 1742 there were, apparently, more than ten major famines. The so-called 'great Ethiopian famine' hit the country during 1888-92, killing of possibly a third of the total population. In comparison with the great Ethiopian famine, the famine that Ethiopia experienced in 1972-4 might appear to be a moderate affair, in a population of about 27 million. The hard hit victims of this famine were the pastoralists, particularly from the Afar community, evicted farm servants and rural laborers, tenant cultivators, small land-owning cultivators, daily male laborers in urban areas, women in service occupations, weavers and other craftsmen and occupational beggars.
'Drought and Famine in the Sahel' (chapter 8) first offers readers the politico-ecological definition saying 'the Sahel is defined as the semi-arid vegetation belt in six West African countries, viz, Mauritania, Senegal, Mali, Upper Volta, Niger and Chad. 'The peak year of the famine in the Sahelian countries was 1973, the starvation having by then gathered momentum in a cumulative process of destitution and deprivation. The number of famine deaths during that year was estimated to be 100,000,' the author tells us.
Chapter 9 analyses the famine in Bangladesh of 1974 : '...The official figure of death due to the famine is 26,000. Other estimates indicate much higher mortality, including the estimation that in Rangpur district alone 80 to 100 thousand persons died of starvation and malnutrition in 2-3 months.' Sen here also elaborates on how imperialist US policy helped largely in causing the famine of 1974, '...the US food aid came under severe threat precisely at this point of time, since the United States decided to seek stoppage of Bangladesh's trade with Cuba. Only after Bangladesh gave in and sacrificed its trade with Cuba was the flow of American food resumed. By then the autumn famine was largely over.'
Written in very lucid language, 'Poverty and Famines' offers its readers a complete anecdote of poverty and famines in the countries of Asia and Africa as well analyses the fundamental role of colonialism (in the Bengal Famine 1943) or neo-colonialism (in famines of Ethiopia, Sahel of Africa or Bangladesh during 1972-1974) in causing these great epidemics.
The review is a reprint. Audity Falguni is a writer, poet, critic and social researcher.