A new horizon of cooperation 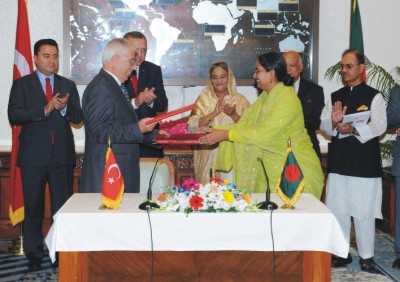 Bigger than France, Turkey is a part of Europe and Asia, adjoins oil-rich Iran, and sits astride the Dardanelles and Bosphorus straits. Its geopolitical importance is recognised by all big powers.
Prime Minister of Turkey, Recep Tayyip Erdogan and his wife Madam Emine Erdogan visited Bangladesh on November 13-14. Erdogan has been the prime minister since 2003. During his tenure, Turkish engagement with the outside world and in the region has increased through its proactive political and economic policies, making the country a key regional player.
The ties between Bangladesh and Turkey are deep, and the people of Bangladesh have great respect for the Turkish leader Kemal Ataturk (father of the Turks), the founder of modern Turkey. Bangladesh's national poet late Kazi Nazrul Islam, wrote many poems in the '20s and '30s in which he lauded the leadership of Kemal Ataturk.
A main avenue in Dhaka was named after the Turkish leader Kemal Ataturk, and also a school in a rural area (Noakhali) in Bangladesh. There is a Turkish Hope International School at Uttara.
People of both countries have deep commitment to democracy and other liberal traditions. Both people fought to achieve their independence.
Bangladesh's relations with Turkey are excellent and mutually supportive, and they have been nourished by the successive governments of both countries through high-level bilateral visits.
President Zillur Rahman of Bangladesh visited Istanbul for four days from November 6, 2009 to attend the Economic Summit of Standing Committee for Economic and Commercial Cooperation by the OIC, and had fruitful discussions with the Turkish president. On his invitation, Turkish President Abdullah Gul visited Bangladesh in February this year.
Finance Minister A.M.A. Muhith attended the Bangladesh-Turkey Joint Economic Cooperation in Turkey from November 17 to 20, 2009.
Given the warm bilateral relations, the visit of the Turkish prime minister to Bangladesh is the second highest political interaction with Bangladesh leaders and assumes great importance for economic cooperation between the two countries.
The economy of Turkey has registered a growth of 7% this year. Turkey's commercial influence over northern Iraq is overwhelming. It has signed a Free Trade Agreement with Jordan and says that trade with Iran will triple within the next five years.
During the visit, the two sides signed agreements on cooperation in the health sector and on exchange of land for embassies in Ankara and Dhaka. Air connectivity by Turkish Airlines between the two countries is expected to begin by next month.
Bilateral trade has increased considerably. In the last one year, from September 2009 to October 2010, two-way trade amounted to $927 million, according to the Federation of Bangladesh Chambers of Commerce and Industry. Both countries agreed to increase the trade volume to at least $3 billion by 2015.
Fikret Cicek, president of the Turkey-Bangladesh Chamber of Commerce and Industry, told the media that his country's carpet industry had been a major importer of jute yarns from Bangladesh. "Now Bangladeshi readymade garments are seeing a bigger opportunity in Turkey," said Fikret. He listed major Turkish exports to Bangladesh as textile dying machinery, chemicals, power generators, steel products and red lentils.
The Bangladesh side sought investment from Turkey in various sectors, such as infrastructure, energy, agro-based industries, ICT, textile, and river dredging. It was pointed out that Bangladesh was a good destination for relocating Turkish RMG factories and other industries to make their exportable products more competitive in world market with availability of skilled cheap labour.
The Turkish prime minister expressed his country's support to Bangladesh so that it can turn into a middle-income country by 2021.He also expressed his country's willingness to enhance cooperation in education sector.
Mentioning the excellent bilateral relations that exist between Bangladesh and Turkey, Prime Minister Erdogan hoped that the relations would be further enhanced with the expansion of trade and business between the two countries.
Turkey and Bangladesh are members of D-8 Commission and both countries cooperate with each other in sectors agreed at the summit of the D-8 Commission in July this year in Nigeria, which was attended by the Bangladesh prime minister.
Bangladesh and Turkey have renewed pledges to work closely in different international forums to maintain world peace and security as well as combat terrorism in all its forms and manifestations
The core aim of Turkish foreign policy is to pursue friendly relations with neighbours coupled with removing regional and global tensions. Turkey has adopted diplomatic initiatives to offer mediation in regional disputes -- such as between the US and Iran, Iraq and Syria, and between Israel and Syria. Turkey has also played a positive role in trying to remove misunderstandings between Pakistan and the Karzai government in Kabul.
The Turkish government's constructive relations with Iran, its outspoken criticism of Israel's Gaza policy, the Turkish-Brazilian swap deal for Iran's low-enriched uranium in May and its "no" vote on the fourth round of sanctions on Iran at the UN Security Council demonstrate its pragmatism in the conduct of its proactive foreign policy.
Given the pre-eminent standing of Turkey in the region, the Turkish prime minister's visit to Bangladesh will reinvigorate bilateral relations and will provide opportunities in cooperation in mutually beneficial sectors.
The visit has made both countries recognise more fully the degree to which they share interests in important global and regional issues. Geopolitics and economics invite the two countries to move closer together.

Harun ur Rashid is a former Bangladesh Ambassador to the UN, Geneva.