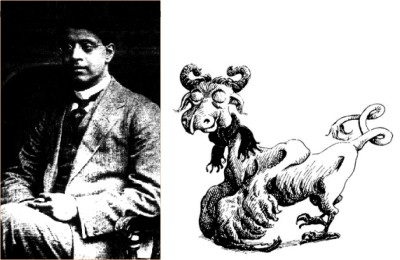 An illustration (below) by Sukumar Ray.

Bengali poet, storywriter and playwright Sukumar Ray was perhaps the most famous practitioner of “literary nonsense” in the subcontinent. He is often compared to Lewis Carroll. His works such as the collection of poems “Aboltabol”, novella “HaJaBaRaLa”, short story collection “Pagla Dashu” and play “Chalachittachanchari” are considered nonsense masterpieces equal in stature to “Alice in Wonderland”, and are regarded as some of the greatest treasures of Bangla literature. Close to a century after his death, Ray remains one of the most popular among children's writers in both West Bengal and Bangladesh.
Today marks 123rd birth anniversary of Sukumar Ray.
He was son of the famous children's storywriter Upendrakishore Ray Chowdhury and father of the iconic filmmaker Satyajit Ray. Sukumar Ray was also known as the convenor of “Monday Club”, a weekly gathering of likeminded people at the Ray residence, where the members were free to express their irreverent opinions about the world at large.
Born in an era, which can be called the pinnacle of the Bengal Renaissance, he grew up in an environment that fostered his literary talents. His father was a talented writer of stories and popular science; painter and illustrator extraordinaire; musician and composer of songs; a pioneering technologist and astronomer. Upendrakishore was also a close friend of Rabindranath Tagore, who directly influenced Sukumar. Among other noted family friends were Jagadish Chandra Bose and Prafulla Chandra Roy. Upendrakishore studied the technology of block-making, conducted experiments, and set up a business of making quality blocks.
In 1906, Sukumar Ray graduated with Honours in Physics and Chemistry from the Presidency College, Kolkata. He was trained in photography and printing technology in England and was a pioneer of photography and lithography in undivided India. While in England, he also delivered lectures about the songs of Rabindranath before he [Tagore] won the Nobel Prize. Sukumar had also drawn acclaim as an illustrator. As a technologist, he also developed new methods of halftone block-making, and technical articles about this were published in journals in England.
Upendrakishore started a publishing firm, which Sukumar and his brother Subinay helped to run. While Sukumar went to England to learn printing technology, Upendrakishore set up a printing press with facilities for high-quality halftone colour block-making and printing. He also launched the children's magazine, “Sandesh”. Soon after Sukumar's return from England, Upendrakishore passed away, and Sukumar ran the printing and publishing businesses and the “Sandesh” magazine for about eight years.
Apart from the cultural and creative activities, Sukumar Ray was also a leader of the reformist wing in the Brahmo Samaj.
Ray died in 1923 of severe infectious fever, 'Leishmaniasis', for which there was no cure at the time. His son Satyajit Ray would later shoot a documentary on Sukumar Ray in 1987, five years before his own death.
Compiled by Correspondent