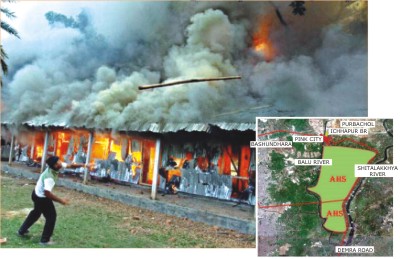 An army camp was set ablaze by angry villagers during an agitation over “forced purchase of land" for a project, the Army Housing Scheme (AHS), at Rupganj upazila in Narayanganj yesterday afternoon. Inset, A satellite view obtained from Google Earth shows the project site. Photo: Star

Thousands of villagers fought pitched battles with law enforcers yesterday over “forced purchase of land” for an army housing scheme in Rupganj of Narayanganj.
At least 50 people were injured, 15 of them bullet-hit.
The clashes broke out when the law enforcers opened fire on stick-wielding protesters laying siege to a makeshift army camp at Tanmushury around 11:00am, said witnesses.
The violence soon spread to three other camps in the area.
In the afternoon, the authorities had 60 troops airlifted out of the area, as over 7,000 villagers besieged the camps.
Later, the demonstrators torched two vehicles and the Tanmushury camp.
Vehicular movement on the road between Rupganj upazila headquarters and Ichhapur remained suspended throughout the day.
Of the injured, those with gunshot wounds were admitted to Dhaka Medical College Hospital and the rest to private hospitals and clinics in Dhaka and Narayanganj.
Eleven cops, four Rapid Action Battalion men and three of the army were among the wounded.
Locals said the army has been trying for the last six months to buy 6,000 bighas of land under 24 moujas in Rupganj to develop a housing project.
They alleged they are not allowed to sell land to anyone other than the army.
Besides, the army forces them to sell land for only Tk 15 lakh a bigha when the current market price is Tk 40 lakh, added the villagers.
In a late-night press release, Inter Services Public Relations said local vested interests have been obstructing the Army Housing Scheme (AHS) for the last few months, and they are the ones responsible for yesterday's incident.
It said a group of unruly people attacked the army men and ransacked the AHS project office.
“When they tried to snatch weapons from the troops, a few rounds of bullet went off leaving a civilian injured,” read the ISPR release.
The army authorities have decided to withdraw all makeshift offices in Rupganj to facilitate negotiations with the locals, added ISPR.
It also said the AHS project runs solely on private funds of the servicemen.
An army blog claims the government has accepted in principle a proposal for “self-financed housing scheme for the army'' in Rupganj.
However, Abdul Mannan Khan, state minister for housing and public works, said he was not aware of any such project.
"I know nothing. Nobody has informed me," he told The Daily Star.
Rajuk Chairman Nurul Huda said he too did not know of any housing project for the army in Rupganj.
As per the rules, he said, developers must obtain an approval from Rajuk to implement a housing project. And to get the go-ahead, they need to submit a layout of the project in keeping with the Detailed Area Plan.
Witnesses said people from 30 villages started gathering on the Ichhapur-Rupganj road from around 9:00am.
Shouting slogans against land purchase by the army personnel, they went to lay siege to Tanmushury camp at around 10:30am.
As police charged baton, the demonstrations got even more violent.
To disperse the marauding crowds, Rab and army personnel shot at least 150 bullets, injuring some 25 people. The shooting forced the demonstrators to go away for some time.
But as the news spread, more villagers joined in. Within an hour, the crowd swelled to around 7,000 and laid siege to three more camps in a five-km radius of Tanmushury.
Mohammad Alam, an eyewitness, said, "The Rab men fired at knee-level when the mob was about to storm the army camp."
Abdus Salam, a local worker, said that shortly after the shooting, someone was announcing through loudspeakers that the army men had shot dead many villagers.
It inflamed the situation, leading the demonstrators to attack the Tanmushury camp.
Alongside the Rab personnel, some army men fired on the crowd, he added.
Momen, one of the injured admitted to DMCH, gave similar account of the clashes.
He said the army personnel fired at least 50 bullets.
Nur Alma, 38, another bullet-hit, said several thousand villagers gathered in front of Krishna Cinema Hall at Ichhapur around 10:00am to attend the protest rally at Rupganj school ground.
“Around 10:30am, over 80 Rab personnel reached the spot and asked the villagers not to join the rally,” he told the Daily Star at DMCH.
The Rab men fired at least 150 rounds at the villagers defying their instructions and left some 20 injured.
Contacted, Commander Mohammad Sohail, director of Rab's legal and media wing, said “Rab and police opened fire when the army personnel of the four camps came under attack."
Biswas Afzal Hossain, superintendent of police in Narayanganj, however told The Daily Star that police did not fire a single bullet.
Locals told the police that they were demonstrating as they were not getting fair price for their land, added the SP.
Some villagers alleged ruling Awami League lawmaker Golam Dastagir Gazi has been helping the army men purchase land at throwaway prices.
Gazi, however, rejected the allegation. He claimed a few land developers and leaders of BNP and Jamaat instigated the incident to scuttle the process of trying war criminals.
He said he along with a few local leaders visited the army camp on Thursday and told the army personnel about people's resentment and confusion over the purchase of land for the project.
"We submitted a four-point demand to an army officer for purchasing land directly from the owners and not to evict those who have been living there for long," he said.
Locals feared that the army would purchase a small portion of the required land and acquire the rest, he said.
Meanwhile, Rupganj Upazila Nirbahi Officer (UNO) Sayeda Farhana Karnina said some army high-ups met administration officials of Rupganj upazila to discuss the purchase of land.