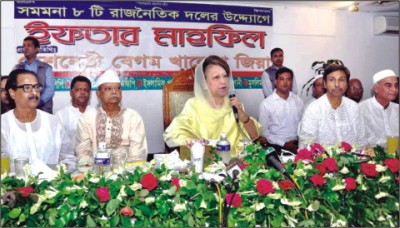 Leader of the Opposition in Parliament and BNP Chairperson Khaleda Zia speaks as a chief guest at Hotel Purbani in the city in an ifter party. Photo: BNP

BNP Chairperson Khaleda Zia yesterday cautioned the Awami League government that people would not allow running the country on dictates of foreign powers.
“Take lesson from the past how the people of Bangladesh toppled the autocratic government,” she said at an Iftar party, warning the ruling party.
Eight political parties -- Jagpa, National Peoples' Party (NPP), Bangladesh National Awami Party (NAP), National Democratic Party (NDP), Bangladesh Islamic Party, Bangladesh Labour Party, NAP (Bhasani) and Bangladesh Muslim League -- hosted the Iftar at Hotel Purbani in the city.
The day's Iftar was Khaleda Zia's last scheduled programme. She hosted and attended a number of Iftar parties since she hosted an Iftar for orphans and Olama-e-Keram on the first Ramadan.
Khaleda is scheduled to leave Dhaka for Saudi Arabia on Monday to perform Umrah. She is expected to return home on September 9.
Japa President Shafiul Alam Prodhan presided over the brief pre-Iftar function.
Addressing the function, Leader of the Opposition Khaleda said the present government wants to govern the country with foreign help and assistance and at their instructions, throwing opposition political leaders into jail implicating them in false cases.
But, she said, people of this country would not allow the country to be shackled.
Portraying a grim scenario of the country during the 20-month Awami League rule, the former prime minister said the situation of the country has turned worse as the ruling party is not governing the country themselves, rather being guided by the others orders.
She alleged that the rule by the present government is marked by extortion, tender-manipulation, killing, torture, repression on political opponents, price hike of essentials, worsening law and order situation, crisis of gas, electricity and water, and unemployment.
Khaleda said leaders and workers of Awami League, Jubo League, Swechchhasebak League and Chhatra League are “involved in extortion, tender-manipulation and plundering.”
Highly criticising the release of the accused in murder cases, she said this has resulted in the increase of crimes in the country.
The BNP chairperson called for unity of all nationalist forces amid the prevailing suffocating situation in the country and urged people to join the post-Eid-ul-Fitr movement planned by BNP for saving the country and its people.
BNP Secretary General Khandaker Delwar Hossain, Lt Gen (Retd) Mahbubur Rahman, Nazrul Islam Khan, BJP Chairman Andalib Rahman MP, Jamaat-e-Islami acting secretary general ATM Azharul Islam attended the Iftar party.