The founder of Bangladesh 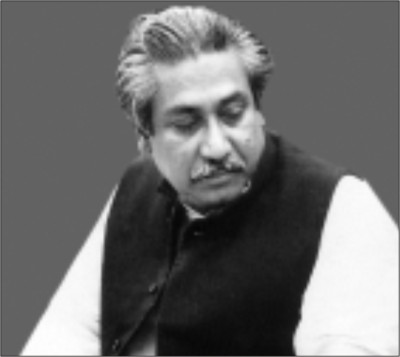 Father of the Nation' is an honorific bestowed on individuals who are considered the most important in the process of the establishment of a country or a nation. They are instrumental in the birth of their nations by way of liberating them from colonial or other occupation. George Washington is the father of the United States, Peter I of Russia, Sun Yat-sen of China, Sir Henry Parkes of Australia, Miguel Hidalgo of Mexico, Sam Nujoma of Namibia, William the Silent of the Netherlands, Einar Gerhardsm of Norway, Julius Nyerere of Tanzania, Jomo Kenyatta of Kenya, Carlos Mannel of Cuba, Mustafa Kemal of Turkey, Sukarno of Indonesia, Tunku Abdul Rahman of Malaysia, Mahatma Gandhi of India, Don Stephen Senanayake of Sri Lanka and Mohammad Ali Jinnah of Pakistan. So is Bangabandhu, the Father of the Bangladesh nation.
Bangabandhu Sheikh Mujibur Rahman (19201975) is the architect of our country and the nation by all implications of the term. As a matter of fact, what we now call Bangladesh was never independent in the truest sense of the term before 1971. It was Mujib and only Mujib who gave the nation a real touch of freedom. It was quite a trek into the long way of freedom from all-out oppression through autonomy and home rule in which he gave the active lead. He was the fearless fighter of the Language Movement of 1952; the pioneer of the democratic movement of 1962; the architect of the Six-point Movement of 1966; the life-force of the Mass Movement of 1969; the enviable victor of the election of 1970 and, above all, the greatest hero of the Liberation War of 1971. He is undisputedly the founder of independent Bangladesh and, therefore, the Father of the Nation.
It is really a matter of regret that we are not well aware of this greatest national leader. But who is to blame for that? As a matter of fact, there has been a long chain of conspiracy to make people oblivious of Bangabandhu. It began with his assassination on the inauspicious August night of 1975. Ever since then the country fell mostly under the sway of despotic military rule accompanied by the corrupt politicians, opportunistic bureaucrats, pseudo-democrats and religious fundamentalists. They had one thing in common i.e. Bangabandhu-bashing. They tried to indemnify the killers of Bangabandhu, and rewarded them with lucrative portfolios. They took sustained efforts to erase the image of Bangabandhu from the minds of the people by distorting history. They tried to obliterate the memories of Bangabandhu from the pages of history, inscriptions of monuments and from whatever holds the recollections of Mujib.
The anti-Mujib campaigners are not, however, as powerful as history itself. History takes its own course, maybe after quite a long time. But this is inevitable. So, the anti-Mujib campaigners have vainly tried to change the course of history eventually making a mockery of it. What they had done at best is that they had fooled some people for sometime or what they can still do is that they can fool some people for all time, but they can never fool all people into believing a false story for all time. People must be endowed with a true sense of history today or tomorrow.
To look into one's own history and culture and to go for the quest for national identity and cultural heritage have become an imperative in these postcolonial days. Ours is not a poor socio-political and cultural legacy. We fought valiantly a war of independence under the leadership of Bangabandhu. We can very well come up with this political legacy and assert ourselves more. We can uphold the ideals of Bangabandhu to rebuild our nation.
Mujib is really Bangabandhu, friend of Bangladesh. And hence he could utter: 'Standing on the gallows, I will tell them, I am a Bengali, Bangla is my country, Bangla is my language". On the black night of March 25, when it was suggested that he go into hiding, he flatly refused and retorted: "I must share the sufferings of my people along with them. I must share. I cannot leave them in the face of fire. I cannot." Really he did not flee to safety from the war-torn country. Rather he willingly became the first prey to the marauding force. Love for the motherland had prompted him to take such a risk. Afterwards, over nine long months, day after day and night after night in the dark cell of the prison camp, he longed for the freedom of his country. The unbearable suffering of the dungeon could not sap the strength of his patriotism. On his return home on 10 January 1972, addressing a huge gathering in Suhrawardy Uddyan, Bangabandhu declared: "Bangladesh has earned independence. Now if anybody wants to seize it, Mujib would be the first man to sacrifice his life for the protection of that independence". His country was all important to him. He believed it was his calling to do good to his country, not to look forward to anything in return. He often used to mention the famous quote by President John F. Kennedy: "Ask not what your country can do for you. Ask what you can do for your country".
Such a big man was Bangabandhu! The undisputed Father of independent Bangladesh. To be unaware of this is sheer ignorance. To deny this is an offence against history.