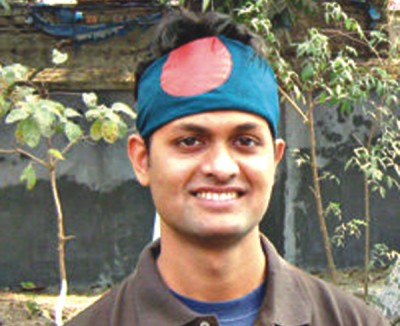 Musa Ibrahim has scaled Mount Everest as the first Bangladeshi, said friends and family of the mountaineer.
He reached the summit at 6:00am Bangladesh time yesterday, Musa's wife Sorabon Tahura Rimi told The Daily Star.
She was citing an e-mail sent by the manager of Himalayan Guide, the firm that arranged the expedition.
The news came at around noon in Dhaka. Soon, greetings began pouring in on different blogs and social networking sites like Facebook and Twitter.
Musa, a sub-editor at The Daily Star, used the North Alpine route on the Tibetan side to conquer the top of the world, Anik Khan, a friend of the climber, told The Daily Star from Kathmandu in the evening.
Iswari Paudel, managing director of Himalayan Guide, has confirmed the news, he added.
“Iswari learned about Musa's feat when her brother Bhola Paudel, manager of the advanced base camp, called via satellite phone.”
All 26 members of the expedition including 14 Sherpas got to the summit (8,848 metres), Anik said quoting Iswari.
Besides Musa, three Montenegrins, six Britons, one American and a Serb are in the team.
The arranger of the tour told Deutsche Welle Bangla Service that they had the news from their Tibet base camp yesterday morning.
The team departed from their last camp, situated at 8,300 metres, at 10:00pm Saturday.
Musa, founder of the North Alpine Club in Bangladesh, left Dhaka for Nepal on April 8.
Along with a group of young mountaineers, he had been preparing for years to summit the highest peak on earth.