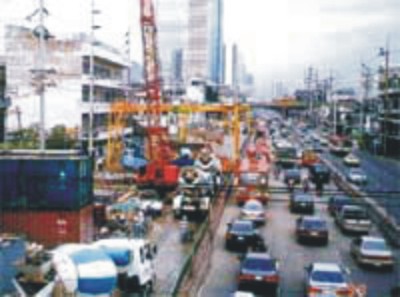 THE MRT (Mass Rapid Transit), sometimes referred to as the Bangkok Metro, is Bangkok's underground metro system. It was constructed under a concession concept. Most civil infrastructure were provided by the government sector, Mass Rapid Transit Authority of Thailand (MRTA) and handed over to their concessionaire under a 25-year concession agreement. As MRTA's concessionaire, Bangkok Metro Company Limited (BMCL) provides M&E equipment, including electrical trains, signalling systems, SCADA, communication, PSD, etc for the subway project and fully operates the system. To maintain the system, BMCL has subcontracted in 10 years to Siemens which was the M&E system supplier since system opening and 7 years maintenance contract to two local maintenance services for north and south line. The metro has a fleet of 19 trains; the 19th train entered service in October, 2007 after a major accident. Besides the MRT, Bangkok also has an elevated rail system called BTS or informally the Skytrain.
The construction of the first Bangkok Metro line, officially known as Chaloem Ratchamongkhon "Celebration of Royal Auspice" or informally as the "Blue Line", began on 19 November 1996. The project suffered multiple delays not only because of the 1997 economic crisis, but also due to challenging civil engineering works of constructing massive underground structures deep in the water-logged soil upon which the city is built. On 3 July 2004 the line was officially opened by HM King Bhumibol and Queen Sirikit. Within 30 minutes of its opening, sightseers filled the system to its maximum capacity, but after the initial rush ridership has settled down to around 180,000 riders daily considerably lower than projections of over 400,000.

Safety measures during construction
The underground mass transit project is the first megaproject of its kind to be undertaken in Thailand, with the whole of the route constructed entirely underground. As the agency responsible for its implementation, the Mass Rapid Transit Authority of Thailand (MRTA) has set as its objectives the implementation of all aspects of the project to internationally accepted standards. In particular, MRTA wishes to establish the project as one with outstanding safety standards which will elevate the image of the country's construction industry.
The project safety standards and procedures have been full coordinated with the relevant governmental and non governmental safety-related bodies concerned with working conditions and problems of underground works, accident prevention, Mass Transit Safety, industrial products, occupational health & safety.
As Thailand does not have specific legislation in place with respect to the safety measures for underground construction, MRTA has instructed all contractors to carry out construction in compliance with widely used and internationally accepted standards, specifically the British Standard BS 6064.

Noise
A number of measures have been applied to minimize impact of noise from construction activities on the community, such as:
- Careful scheduling of noisy work activities and reasonable advanced notice.
- Provision of temporary noise barriers where practical.
- Proper selection and maintenance of machinery to reduce operational noise levels.
- Continual monitoring and assessment of noise level for control in sensitive areas such as schools and hospitals.
- Community relations activities are carried out so that the affected community have full understanding of the project benefits, and accept the temporary inconvenience.

Air quality
The construction of the underground MRT Chaloem Ratchamongkhon Line involves the removal of large volumes of soil and many high capacity engines in the construction plant. The resulting dust and engine fumes affect the air quality in the vicinity of the construction.
However, MRTA requires the contractors to take measures to reduce these impacts by carrying out the work in strict compliance with BMA regulations. These include establishing effective dust control in the construction sites as required by the Pollution Control Department, such as wheel washing facilities and secure covering of dump trucks to minimize spillage. Proper selection and maintenance of engines are also measures taken to reduce the pollution from fumes. Regular air quality monitoring ensures compliance with specified standards.

Traffic management
By nature, underground mass transit construction in high density areas generally necessitates working at or near major road intersections for station construction, for which the open cut and cover construction method is employed. Whilst tunnel boring is usually done without any disturbance to the surface, the route generally runs underneath existing major roads and requires work to be done to surface features obstructing the tunnel passage such as underground utilities, bridges, and overpass structures. The impact on traffic is therefore a prime consideration and needs meticulous planning and close coordination with many agencies.
In order to reduce impact on the traffic, MRTA has established guidelines for construction as follows:
- To continually coordinate with all relevant agencies such as the office of the land traffic, the Bangkok Metropolitan Administration (BMA), and the Traffic Police Division to establish the most beneficial traffic schemes.
- To minimize the construction area for least traffic obstruction, and to install adequate construction warning signs.
- To exercise stringent control of construction equipment movement and loading time.
- To use every possible means to give advance notification of the traffic diversion to the public.
Temporary traffic decking is used to minimize openings in the traffic surface during construction.
As a result of coordination and cooperation of all concerned parties, MRTA is proud to report that traffic management has been carried out to the satisfaction of all, particularly the public, with a very low incidence of traffic complaints to date.

Vibration
Some construction activities cause surface vibration, such as piling, excavation, and removal of buildings. However, the impact on neighbouring structures is deemed to be very slight since the route corridor is along a major road lined with large commercial and office buildings on deep piled foundations. Private residences are generally some distance from the corridor and the impact on the nearby residents is usually limited to annoying disturbances. The vibration caused by tunnel boring occurs at the depth of the boring, and is mostly cushioned by the soil. However, in order to minimize the impact, MRTA has required the contractor to select the method of construction which causes least vibration and also to strictly control the operation of equipment causing vibration.

Water quality
During construction, there may be an increase in suspended solids from construction site discharge and also increased quantities of oil and grease from machinery operation. During the rainy season, the surface runoff may wash these discharges into nearby drainage systems and public waterways, affecting the water quality.
In order to reduce this impact, MRTA has required the installation of sedimentation ponds before discharging into the waterways, and for major surface construction activities to be carried out during the dry season. Apart from this, maintenance workshops operations are strictly controlled so that oil and grease residues are correctly disposed of.

Waste and spoil disposal
Most of the waste material from construction consists of broken out concrete, soil, sand, wood and other materials from clearing and removal, as well as the waste from building materials used in construction. Other wastes are oils and solvents used in cleaning of construction machinery and waste from dormitories and labour camps. As far as the removal of excavated soil is concerned, MRTA requires haulage to take place only at night and the soil to be dumped only at specified locations. Other construction wastes are disposed of at the BMA's sites also during night time. On this project, the Environmental Management Programme and site-specific action plans have been agreed by all parties including an Environmental Monitoring Working Group consisting of environmental planners, BMA, and university academics.
Environmental parameters at each location are regularly monitored and analysed by the Construction Supervision Consultants, and actual site conditions jointly inspected by the Working Group for the contractors' adherence to mitigation measures and follow up action as required.