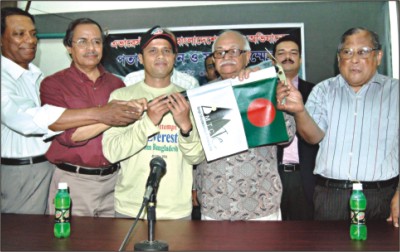 Noted citizens hand over the national flag to MA Muhit, who is going to start an expedition to the Mount Everest next month, at a press conference at the National Press Club in the city yesterday. From left are Enam Ul Haque, Prof Syed Manzoorul Islam, MA Muhit, Prof Zillur Rahman Siddique and Dr Akbar Ali Khan. Photo: STAR

MA Muhit, a Bangladeshi and a member of Bangladesh Mountaineering and Trekking Club (BMTC), is set to start an expedition to the Mount Everest next month.
If he can make it, Muhit will be the first Bangladeshi to conquer the Everest, the 8850-metre (29,035ft) giant lying across the Nepal-Tibet border.
This was told at a press conference and flag off ceremony at the National Press Club in the city yesterday.
Muhit gave a presentation on the Everest at the press conference where he said a team comprising seven members (six others of Germany and the USA) would leave Dhaka for the 60-day expedition on April 6.
Muhit is the only Bangladeshi to conquer the 8201-metre (26,906ft) Mt Cho Oyu and climb up to 7000 meters on the Mt Manslu.
He had earlier done the basic and advance mountaineering training from the Himalayan Mountaineering Institute of India and climbed four Himalayan peaks over 6000 meters (Chulu West, Mera Peak, Singu and Lobuje Peak).
Addressing the press conference, former adviser to a caretaker government Dr Akbar Ali Khan said such kinds of achievements would broaden the mentality of the people.
While noted educationist Zillur Rahman Siddique hoped that someday a team from Bangladesh will conquer the Everest.
Prof Syed Manzoorul Islam, GQ Chowdhury, CEO and executive director of Transcom Beverages Ltd, Abrar A Anwar, MD and head of Citibank NA Bangladesh, and MM Jasim Uddin, AGM of Akij Cement Company Ltd, also spoke at the press conference moderated by Enam Ul Haque, founder of BMTC.