A question mark on urbanisation 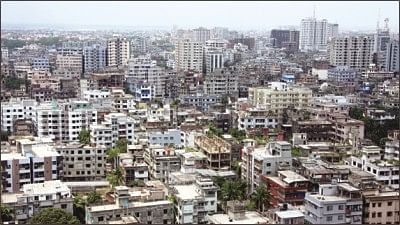 Runaway urbanisation in Dhaka is a popular topic for discussion, but the city has always been recognised as a hub of economic activities. Photo: SK Enamul Haq

About 400 years ago, it was a small speck on a map, off the Buriganga river. Now it is a sprawling city -- Dhaka.
Years on, it is now a matter of debate whether urbanisation in Dhaka is advancing in the right direction or not. But as a city, Dhaka has been recognised as a hub of both economic and political activities in different times since the seventh century.
The earliest available map shows Dhaka extending over an area of only about 1.5 square kilometres near the junction of the Dholai Khal and Buriganga river.
Historically, the British Raj initiated urbanisation on a large-scale in 1904 when Dhaka was made the capital of East Bengal, a newly created province of British India.
Dhaka gained the city status in 1947 when it was made the capital of East Pakistan and by that time, stretched over an area of about 40 square kilometres. The importance of Dhaka increased exponentially after 1971, when it became the capital of an independent Bangladesh.
As a result, the city expanded phenomenally and according to the census of 1991 the area and population of Dhaka mega city or Dhaka Statistical Metropolitan Area (DSMA) was 1,600 square kilometres and 6.83 million respectively.
According to the same census, the area under Dhaka City Corporation (DCC) was 360 square kilometres, with a population of 3.39 million. The present population of DSMA is believed to hover around 12 million.
Experts said unplanned urbanisation somehow shadows some historic structures that gradually result in deterioration of Dhaka's historic look.
The views came at a international seminar on the "History Heritage and Urban Issues of Capital Dhaka" organised by Asiatic Society of Bangladesh at Dhaka University.
Urbanisation and real estate were in the spotlight at the 10th academic session chaired by Prof Roxana Hafiz. A paper on real estate, written by Toufiq M Seraj, managing director of Sheltech Private Ltd, was distributed at the seminar.
Bangladesh's rate of urbanisation is 3.15 percent indicating the mounting housing pressure on urban governments. The physical feature survey in the city corporation area reveals that there are nearly 225,000 permanent structures, which can accommodate three to four million people. The remaining seven million people dwell in semi-permanent or temporary structures in slums and squatters.
However, rapid urbanisation without considering the geological aspects has brought significant changes in the geo-environment of the city area. Water logging, pollution, change in the hydrogeological system, localised land subsidence and building collapse are the hazards associated with these changes in the geo-environment.
"Since 1610, Dhaka was recognised as a ruling centre by different empires and governments. But in terms of urbanisation, it did not develop in a planned manner, especially after independence," said Prof Sarwar Jahan, chairman of department of urban and regional planning of Bangladesh University of Engineering and Technology (BUET).
Talking to The Daily Star, he said it would not be an abandoned city as there is no alternative. However, he said: "Dhaka is losing its competitiveness, compared to other capital cities in the world due to a lack of planning."
Toufiq M Seraj of Sheltech Private Ltd said what happens in Dhaka in terms of housing sector development since the 1980s was mainly because of meeting the demand of a growing number of people.
He said private real estate developers handed over more than one lakh apartment units to the people of the city so far, which accommodates more than five lakh people.
However, he admitted that the housing sector did not develop in the way it should have, due to a lack of policy.
Back in history, Dhaka consisted of a few market centres, like Luxmi Bazar, Shankhari Bazar, Tanti Bazar, and a few localities of other craftsmen and businessmen, like Patuatuli and Kumartuli, Bania Nagar and Goal Nagar.
Jahan said it is not possible to create an alternative to Dhaka city at this moment. But if the government takes steps to decentralise urbanisation under a detailed plan, Dhaka may get relief from the huge pressure of urbanisation.
"For future economic growth, you must have a city where foreign investors can be happy with the facilities," he said. "There is hope to make that happen."
[email protected]