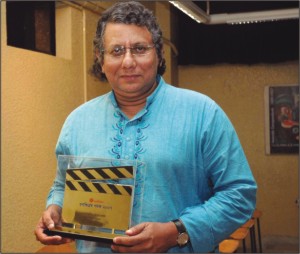 Tanvir Mokammel with his awardPhoto: STAR

Chalachchitram Film Society has conferred renowned filmmaker and one of the leading figures in the alternative film movement in Bangladesh, Tanvir Mokammel, with 'Chalachchitram Padak 2007'. The award giving ceremony was held at the Goethe-Institut Bangladesh on November 22.
Tanvir Mokammel received the crest from noted educationist professor Anisuzzaman. In his speech Professor Anisuzzaman said, “It gives me immense pleasure to be able to hand out this award to a person whose reputation has extended well beyond the borders of our country.”
In his speech, filmmaker and executive president of Chalachchitram Film Society, Morshedul Islam, explained why the film society selected Tanvir Mokammel as the recipient of this year's award. He said, “Tanvir Mokammel has accomplished two important tasks this year. He made a full-length documentary film on the first Prime Minister of Bangladesh and a key figure in our Liberation War, Tajuddin Ahmed. Mokammel has also established a film institute called 'Bangladesh Film Centre'.”
Tanvir Mokammel's much talked about documentary, Tajuddin Ahmed: The Unsung Hero, was screened at the venue.
In his speech, Tanvir Mokammel urged the electronic media to create a platform for talented independent filmmakers. He said, “A number of young filmmakers are making short films, documentaries and fictions at present. They need a better platform to showcase their creativity.”
President of Chalachchitram Film Society, Dr Ashekur Rahman presided over the programme.
Chalachchitram film society has awarded eminent film personalities since its inception. Previously the organisation awarded personalities like actress (late) Sumita Devi, actress (late) Rowshon Jamil, actor (late) Golam Mustafa, journalist and filmmaker (late) Obaidul Haq, filmmaker (late) Alamgir Kabir and filmmaker Soovas Dutt. In 2004, Chalachchitram awarded both directors of the critically acclaimed film, Surjo Dighal Bari (1979), (late) Sheikh Niamat Ali and Masihuddin Shaker.
Tanvir Mokammel has made twelve films so far, including short, feature and documentaries. Some of his films have received awards and accolades both at home and abroad. His noteworthy films include Nadir Naam Madhumati (1994), Chitra Nadir Parey (1999), Lalshalu (2001), Ochin Pakhi and Lalon (2004). At present the filmmaker is working on a documentary on the Bihari community in Bangladesh.
Mokammel was the president of Bangladesh Short Film Forum. He is the current director of Bangladesh Film Institute in Dhaka. Mokammel completed his masters in English Literature from the University of Dhaka in 1979.