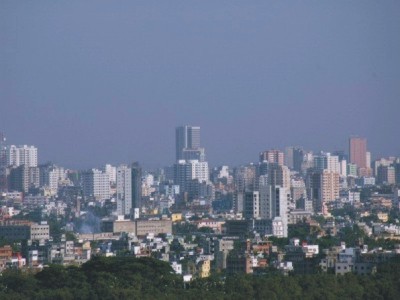 REMOTE sensing is an important tool for mapping and monitoring environmental issues. Apart from mapping large and inaccessible areas, remotely sensed data are invaluable in detecting changes over a long period of time. This write-up provides an account of urban expansion in Dhaka over the last 48 years.
Historical maps, multi-temporal remotely sensed data, and socio-economic information from field surveys were used to quantify urban growth in Dhaka. A geographic information system (GIS) was used to elucidate urbanisation and its driving factors. Multiple regression technique was also used to depict the factors responsible for massive growth of the city. A rectangle covering 42,000 Hectare (ha) of area was extracted from satellite images to study the urbanisation trend. The rectangle covers the Dhaka City Corporation area and adjacent zones in all directions.
Dhaka has been experiencing rapid urbanisation since independence of the country. The degree of urbanisation is one of the fastest in the world, having a moderate level of inequality in terms of Gini coefficient, according to a recent report by the UN-Habitat. The environmental condition of the city is rapidly deteriorating. Most of the wetlands have been encroached on, rivers have become terribly polluted. Increasing air, water and noise pollution is a significant threat to public health.
Losses from floods and water logging have increased due to rapid growth of impervious surfaces, and there are limited facilities to minimise huge flood flows during wet season. In addition, slums are increasing at an alarming rate. Since the urbanisation is mostly unplanned, the city is said to be extremely vulnerable to probable climate change.
Spatial pattern of urbanisation shows that the growth of Dhaka was mainly confined to elevated lands in the 1960s and '70s. Only 4,625 ha of lands were urbanised in 1960. This shot up to 5,550 in 1975, signifying 20 percent growth in 15 years. Since then, urbanisation increased dramatically. A 95 percent increase of urban built-up area was estimated between 1975 and 1988. Analysis revealed that urban land of Dhaka reached to about 20,549 and 24, 889 ha in 2005 and 2008, respectively. The analysis further shows that urban land increased by about 344 percent compared to 1960.
The growth has been phenomenal as the city is the hub of administrative, cultural and commercial activities. Since urban built-up areas are increasing at a faster rate, concurrent decline of other land use categories has been observed. For example, wetlands decreased from 13, 514 ha in 1960 to 7,128 ha in 2008. Substantial loss of cultivated land was also observed in the same period. A recent newspaper article warned that Bangladesh, on average, is losing 220 ha of agricultural land per day, which has an effect on food security, and the situation may exacerbate in the context of climate change that would bring changes in agricultural production.
Inadequate housing, haphazard development, ubiquitous urban poverty, absence of proper land use policy, inequity of lands, pitiable coordination among responsible agencies and absence of reliable information on current land use practices are contributing to urban sprawling, which is leading to unconceivable emergence of slums and squatters. A recent study by CUS showed that the slum population in Dhaka had risen to 3.4 million in 2006 from 1.5 million in 1996.
Apart from population growth, increasing rural-urban migration, industrial growth, and economic development of Dhaka are believed to be the major factors contributing to rapid urbanisation. Hence, selected physical (e.g. elevation and slope) and socio-economic variables were used to identify the factors stimulating urbanisation. A multiple regression model was used for this purpose. The model result exhibits that population growth and economic development of Dhaka contributed to urban expansion more than other factors.
Dhaka's expansion cannot be explained by the traditional growth theories such as concentric, leapfrog, linear and multi-nuclei expansion, or by their hybrids. Urban land expansion on isolated tracts separated from other areas by open space is known as leapfrog expansion. It is clearly observed on fringe zones or peripheral rural areas rather than in the city centre. Expansion of a city in all directions is called concentric expansion. When a city expands along the main transportation axis such as highway, expressway or river, the expansion can be termed linear expansion. When a city expands on the basis of more than one nuclei apart from the central business district (CBD), it is called multi-nuclei expansion. In this expansion, the cities act as nodes of activity at the junction of major crossroads in the outer parts of urban areas. Dhaka's expansion may be described as a hybrid.
The above statistics clearly indicate Dhaka's phenomenal growth over a few decades. Since wetlands and fertile agricultural lands are being encroached upon without considering environmental consequences, unplanned urban expansion is creating tremendous pressure on limited resources in Dhaka. For example, flood loss in Dhaka is mounting as water-bodies and reservoirs have been filled up. A recent study showed that Dhaka suffered $5.6 million in 2004 though the magnitude of flood was significantly lower than the 1998 flood that accounted for a loss of $4.4 million.
Probable climate change may intensify the flooding condition of the city if necessary steps are not taken to stop urbanisation on precious wetlands and cultivated lands. Lack of coordination among responsible organisations is also hindering the dynamics of urban growth, which should be taking into account. The government has to introduce land-use zoning so that natural lands can be saved, otherwise environmental degradation would make the city inhabitable at the end of the day.