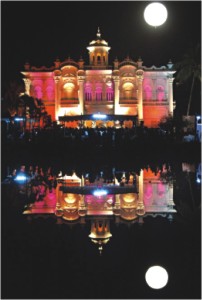 The year-long programmes, celebrating 50 years of Alliance Française de Dhaka, came to an end recently at the Rose Garden in Old Dhaka with a cultural programme. A group of Bangladeshi and French artistes rendered songs and performed dances at the festival. The show was vibrant and was well attended by people from diverse fields of interest.
The Rose Garden was decked with an excellent light and sound system. The spectacular "Herbert's Dream" performance, staged by a four-members theatre team from France, amazed the guests.
After some music and dance performances, Saliha Lefvre, director of Alliance Française de Dhaka, called upon the chief guest, guest of honour and special guests to come to the dais.
Minister for Information and Culture Abul Kalam Azad was present as chief guest. Azad said, “Bangladesh is ready to work together with France to improve cultural ties as well as strengthening trade and economic cooperation.”
Secretary General de la Fondation Alliance Française, Jean-Claude Jacq, came from Paris to Dhaka for the first time since Alliance Française opened in the city. He attended the closing ceremony as guest of honour.
Jacq said, “Bangladesh is an important country in the region in terms of her population, culture, peace and development.” He also said that a nation that forgets its past, language and own cultural heritage, cannot create anything for its future.
French Ambassador Charley Causeret, special guest at the programme, said, “Alliance Française de Dhaka has changed a lot by improving its facilities and modernising itself over the last thirty years. To meet the increasing demand for French classes in Dhaka, two new branches have opened -- one in Baridhara, and the other one in Uttara. Over three thousand students were admitted last year. The cultural activities have also been booming with the launch of various artistic workshops, exhibitions at La Galerie, concerts and many more successful events.”