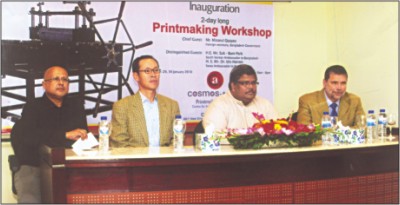 A two-day long printmaking workshop concluded on January 30 at Cosmos-Atelier 71, Malibagh, in the city, says a press release. Leading local and foreign printmakers attended the workshop with an aim to popularise the medium among artists in Bangladesh. Wood engraving, linocut, metalcut, etching, aquatint, mezzotint, drypoint, lithograph, among other mediums, are familiar to the printmakers of our country.
Secretary to the Ministry of Foreign Affairs Mijarul Quayes inaugurated the workshop along with the South Korean Ambassador to Bangladesh Suk-Bum Park and Swiss Ambassador Dr. Urs Herren. Enayetullah Khan, chairman of Cosmos-Atelier 71 spoke on the occasion.
The Swiss Ambassador complimented the artworks of the Bangladeshi printmakers and observed that these could be exhibited abroad in the interests of publicity and diplomacy.
South Korean Ambassador Suk-Bum Park said that he has attended many exhibitions and cultural programmes in Bangladesh, and is quite excited to see peoples' love for art. He said that South Korea could be a partner of Bangladesh in sharing experiences in the art and cultural domain.
Mijarul Quayes praised private initiatives to promote the art and cultural heritage of Bangladesh alongside the government endeavours. He said that it is important to take the country's opulent art and cultural heritage to the outside world.