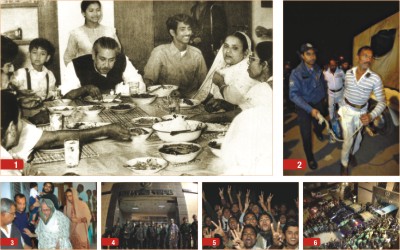 It has taken over 34 years to ensure justice since August 15, 1975 heinous killing of Bangabandhu Sheikh Mujibur Rahman.
A dark cloud that has been looming over the nation since that day was partially removed early this morning with the executions of five of the 12 condemned killers.
The incidents of August 15, 1975 constitute the darkest part in the history of Bangladesh's politics, as the episode introduced bloodbath as a means of regime change in the country.
Completion of the trial of Bangbandhu killing case and implementation of the verdict will remain in the history of the judiciary as an example of how many hurdles justice might have to cross before being served.
The looming darkness deepened further in the form of the Indemnity Ordinance, which was introduced by Khandaker Moshtaque Ahmed and then given constitutional legitimacy by Lt Gen Ziaur Rahman, to protect the killers of Bangabandhu and obstruct justice.
No government took initiatives to ensure justice for the killing of the country's first president until Sheikh Mujib's own party Awami League came to power in 1996 under the leadership of his daughter Sheikh Hasina.
"Thoughts about the security of my life and other various adversities led me to delay filing of the case regarding the incident," a note from the case's complainant AFM Mohitul Islam in the FIR (first information report) filed with Dhanmondi police station on October 2, 1996 gives an idea of how adverse the situation was for filing a case in the aftermath of Bangabandhu's assassination.
In November 1996, Hasina's first government repealed the black indemnity ordinance of 1975, paving the way for the trial.
Following investigation, submission of charge sheet, and framing of charges, the trial court completed its proceedings on November 8, 1998, pronouncing death sentences for 15 accused and acquitting four others.
However, the trial was to face many political and legal hurdles that would contribute to further prolonging of the whole trial process since the verdict of trial court.
The uncertainty started clouding the fate of the case as first several High Court judges and then Supreme Court felt embarrassed and preferred to refrain from holding the trial at that time.
The reasons for the judges' embarrassment could not be known, but the matter was widely discussed among the people.
The then chief justice Latifur Rahman, who later became the chief of a caretaker government, writes briefly in his book 'Tattabodhayak Sorkarer Dinguli O Amar Katha' (The Days of Caretaker Government and My Version) about the judges' embarrassment.
"Usually, judges feel embarrassment with regard to cases which they litigated as lawyers, or if any of their relatives or special friends is involved in the case, or if the judges were somehow directly involved in the case. Otherwise no judge can decline to receive any case," Justice Latifur Rahman says in his book.
He observes that in the past judges used to write, "I am embarrassed to hear this case" in courts' order books, and the chief justice would send the cases to other courts right away. "However, it doesn't seem to me that judges used to feel embarrassed much back then," he says.
"When most of the senior judges felt embarrassed to hear Bangabandhu killing case, it seemed to the [Supreme Judicial] Council that the judges were reluctant to hear the case and avoiding responsibilities," says Justice Latifur Rahman who was the chief justice from January 1, 2000 to February 28, 2001.
The hearing of the death reference finally started in the High Court on June 28, 2000, about 20 months after the verdict of the trial court, and was completed on April 30, 2001 after the judgment of the third judge.
Judges' embarrassment in the Appellate Division of Supreme Court further delayed completion of the trial of the historic case.
The case was not heard for a single day during BNP's five-year tenure (2001-2006) because of a 'lack of judges' in the Appellate Division.
At one point, Justice Mahmudul Amin Chowdhury, who was the chief justice from March 1, 2001 to June 17, 2002, suggested appointing a judge on an ad hoc basis for hearing the case. The BNP-led government, however, made no move.
A three-member bench was finally formed in the Supreme Court to hear the leave-to-appeal petitions after Fakhruddin Ahmed-led caretaker government took office. The bench allowed the condemned convicts to file regular appeals against the High Court verdict.
But hearing of their regular appeals was ensured only after the present Awami League-led alliance government appointed a few judges to the Supreme Court and set up a five-member special bench to hear the appeals.
The hearing started on October 5, 2009. After 29 days of hearing, the apex court delivered the much-awaited final verdict that rejected the appeals of the killers and upheld the high court verdict of death sentences for the 12 killers.
Following the SC verdict that has been termed by many as 'the best historic judgment for the nation', the killers filed review petitions for commutation of the sentences.
The SC yesterday morning rejected the plea of the killers, and President Zillur Rahman earlier this month had rejected the mercy petitions of four of the condemned convicts. Only Sultan Shahriar Rashid Khan refrained from begging mercy.
All five condemned convicts were executed in the first hour of this morning.