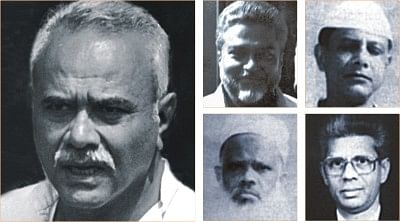 Five condemned killers of Bangabandhu Sheikh Mujibur Rahman were hanged early today at Dhaka Central Jail amid tight security. The death sentences of the five were executed around 14 and a half hours after the Appellate Division dismissed their pleas to review the Supreme Court verdict that confirmed capital punishment to 12 former army officers including the five petitioners on November 19 last year. The dismissal paved the way for executing the five killers of Bangabandhu Sheikh Mujibur Rahman and most of his family members any time within January 31. "Sultan Shahriar Rashid and Syed Farooq Rahman were the first to walk the gallows at 12:05am. They were handcuffed and their heads were covered in black hoods in the final minutes to midnight," Dhaka Deputy Commissioner Zillar Rahman told The Daily Star soon after he walked out of the jail premises around 1:45am. Two hangmen put two nooses around the necks of the two condemned killers. Two other hangmen--Hafiz and Shahjahan--were ready to pull levers to slide apart the scaffolds. It was 12:05am. Dhaka Jail Superintendent Touhidul Islam dropped a handkerchief from his hand to give signal to the hangmen. The two chief hangmen pulled the levers. Sultan Shahriar and Farooq were kept hanging for half an hour to confirm their death, witnesses said. At 12:35am, two other killers of Bangabandhu--AKM Mohiuddin and Bazlul Huda--were brought to the gallows. They were also executed in a similar fashion. Then it was the turn for Mohiuddin Ahmed. He was brought to a gallows at 1:05am and was hanged following all rituals. The authorities had taken up a three-layer security measure for the execution. Members of Rapid Action Battalion, police and armed police battalion were deployed around Dhaka Central Jail. Vehicular movement was restricted on the road in front of the jail gate. Besides, law enforcement and intelligence agencies were kept alert across the country to avert any untoward incident. As the news spread earlier that the five convicts would be executed, several hundred people started gathering at the jail gate in the evening, reported our staff correspondents Rashidul Hasan and Shaheen Mollah. A lot of people brought out processions in different parts of the capital including Bangabandhu's residence in Dhanmondi and Dhaka University campus. Civil Surgeon Mushfiqur Rahman, Inspector General (Prisons) Ashraful Islam Khan, Deputy Commissioner Zillar Rahman, four magistrates led by the Dhaka district additional deputy commissioner, Home Secretary Abdus Sobhan Sikder and Dhaka Metropolitan Police Commissioner AKM Shahidul Hoque arrived at the jail after 10:00pm yesterday. Jail sources said they bathed the convicts around 11:00am. Around half an hour later the civil surgeon and two other doctors conducted medical check-ups of the convicts. Earlier, the two gallows beside the condemned cells in the jail were prepared for the execution. The compound was lit with floodlights around 11:00pm last night. The bodies of the five were sent to their village homes by five ambulances by 3:30am under police and Rab escort after conducting post mortem, said Jail Superintendent Touhidul Islam. People were seen throwing shoes at an ambulance carrying one of the dead bodies. The five hangmen who performed the execution are Hafiz, Mohammad Shahjahan, Faruq, Raju and Sanwar. REVIEW PETITION DISMISSAL

Earlier yesterday, following the dismissal of his review petition, convict Syed Farooq Rahman in the afternoon appealed to the president for clemency, which President Zillur Rahman rejected. Dhaka Jail Superintendent Touhidul Islam last night confirmed The Daily Star that they received the president's rejection order. The Appellate Division rejected the review petitions as they contained no new arguments and any legal grounds for reviewing the Supreme Court judgment confirming the death sentences. In all the petitions, the counsel of the convicts reiterated points that had already been argued during the hearing of their appeals against the High Court verdict. The HC had rejected those pleas. The four-member bench of the Appellate Division headed by Chief Justice Md Tafazzul Islam pronounced the order yesterday morning. The other members of the Appellate Division bench were justices BK Das, Md Muzammel Hossain and SK Sinha. They heard arguments on the review petitions for three days from January 24. Killers Syed Farooq Rahman, Sultan Shahriar Rashid Khan, Mohiuddin Ahmed, Bazlul Huda and AKM Mohiuddin Ahmed, who were in condemned cells of Dhaka Central Jail, had filed the review petitions with the Supreme Court against its verdict. Law Minister Shafique Ahmed told reporters that as per jail code, the jail authorities should execute the convicts between the 21st and 28th days after the trial court issued death warrants against them. The death warrants were issued on January 3 and the countdown started the same day, Shafique said, adding that this means the last date for execution is January 31. Earlier in the day, the law minister held a meeting at his office with Home Minister Sahara Khatun, State Minister for Law Quamrul Islam, Chief State Counsel Anisul Huq, Attorney General Mahbubey Alam, Additional Law Secretary Anwarul Haque, Home Secretary Abdus Sobhan Sikder, Inspector General of Prisons Brig Gen Ashraful Islam Khan and Dhaka Jail Superintendent Touhidul Islam. The meeting was held to decide the next course of action following the passage of the SC orders. On November 19 last year, the Supreme Court awarded death penalty to 12 convicts. Apart from the five executed today, six are on the run and one died. In an instant reaction to the dismissal of the review petitions, Chief State Counsel Anisul Huq and Attorney General Mahbubey Alam told reporters that they are happy with the apex court's order as they got justice in the case. "Our fight was for establishing the rule of law and justice, not envy, and we got justice," Anisul Huq said. Mahbubey Alam said the trial proceeding of one of the most heinous killings in history came to an end with the dismissal of the review petitions. Barrister Abdullah-Al Mamun, lawyer for two convicts, told The Daily Star that they accepted the SC orders although they were disappointed with the dismissal of the review petitions. Mamun urged the prime minister to show mercy to the convicts as a gesture of kindness. FAROOQ'S MERCY PETITION

Convict Farooq Rahman sought presidential clemency through the jail authority. The jail authorities forwarded the petition to the law ministry through the home ministry for legal opinion, a law ministry official told The Daily Star. But the law ministry subsequently opined against presidential mercy to Farooq. The law ministry sent back the petition to the home ministry, saying although it is the president's prerogative to grant mercy, it would not be judicious to pardon the condemned convicts of Bangabandhu murder case. Three other condemned former army officers--Mohiuddin Ahmed, AKM Mohiuddin Ahmed and Bazlul Huda--earlier sought mercy from the president, which the president rejected on January 18.