A sea of ‘Kash-phool’ in the heart of Dhaka 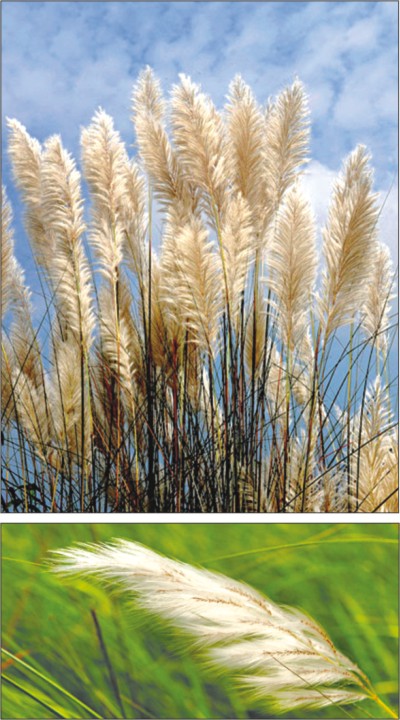 The exhibition features images of various types of ‘Kash-phool’.

A ten-day exhibition, titled "Onno Kash," featuring works of photographer ASM Bulbul is now on at Drik Gallery in Dhanmondi. The exhibition highlights varieties of 'Kash-phool'. 'Kash-phool' or 'Kans grass' is native to South Asia. It is a perennial grass, growing up to three meters in height, with spreading rhizomatous roots.
“There are two reasons behind choosing 'Kash-phool'. One of my favourite childhood memories is of running about in a grove of 'Kash.' I used to be fascinated by their exquisiteness. Another reason is the flower itself. 'Kash-phool' is a symbol of change. Readily, it appears to be a wide bush. But the depth of colours, patterns and shades are often overlooked by most,” said Bulbul.
"Onno Kash" not only features common types of the flower, like 'Ketki,' it also highlights the rarely seen ones and even certain grass flowers which are mistaken for 'Kash.' In one photograph, the flower is seen in the budding stage -- standing proudly against the rich blue backdrop of the sky. The sky takes this hue only in autumn. 'Kash,' incidentally, is considered to be the signature flower of the season.
An image presents a bevy of 'Kash' blossoms -- all looking at the setting sun. In another photo, there are rows of the flowers standing side by side against a dark screen. One would have to look closely to realise that the dark screen is really water.
The photographer had used various mediums and techniques to articulate the simplicity and artistry of the subject. One such method was using microphotography to enlarge the images of specific parts of the flower.
“All the pictures, even though enlarged, are completely natural and had not been modified further except perhaps the light has been dimmed or brightened. The photographer wanted to portray the flower in its natural elements,” said Lutful, a friend of the photographer.
“'Durbar' looks like a classic graphic design,” said a viewer. This particular photograph has ribbons of green and red and the pristine white of the 'Kash-phool' lights up the canvas, making it look more like an artwork and less like a photograph. For this image the photographer had to just sit there with the flower in focus and at one brisk moment when a strong breeze blew and set the background in motion, he clicked. Almost all the photographs have stories of patience and perseverance. There was an accident as the photographer's laptop that had most of his works got stolen at the last moment. The exhibition had to be done with whatever was left.
The photographs had taken four years to compile and had been shot at different locations, including Sylhet, Jahangirnagar University etc. The photographer himself is a senior executive vice president of a bank.
There are mainly five different types of the flower that vary in colour, shapes and sizes.
In a certain black and white picture, the flowers remind one of a poem by Rabindranath, “Dui dharey Kash-bon phool-e phool-e shada”.
ASM Bulbul works mainly on microphotography. “It's interesting to focus on and bring out those subtleties which people rarely notice. For example, in a flower all we see is that which is apparent to us from the outside but the dew drops, fragments, et al are not perceived by most.”