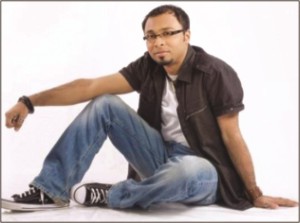 Rajiv Rahman aka "Double R" has released his exclusive mixed album “Adho Megh” on September 4. The album features 10 artistes -- Rupom, Jhumur, Oni, Nil Kontho, Sylvia, Skibkhan, Armen, Baawla, et al. Most of these artistes are involved with a lot of group and mixed album projects like "Maya," "Disciples," "Double R on the Beat," "Re/Evolution," "Impact" and "Deshi MC". Laser Vision distributes the album in Bangladesh.
“Adho Megh,” the title song of Double R's latest album, is a romantic serenade. Other songs featured in the album include “Keno Ridoye”. Double R is the music director and composer. He has also rendered some of the songs. Double R started his musical career early. “My mother was a Tagore singer; she was a student of Chhayanaut. Besides teaching at an English medium school, she also used to run a music School. My father is a litterateur and has his own organisation called "Shiri Shishu Sahitya Kendra". I was always inspired by them,” said the musician via e-mail.
In 2004, Double R set up his own recording studio called Warfare Recording Studio, also known as Double R Production.
After albums like, Stoic Bliss' “Kolponar Bairey,” “Double R on the Beat,” Cosmics' “Baapre Baap,” and his own “Mon Bhabe Tare,” Double R Production has become a familiar name.
In 1999, Rajiv first worked on a mixed album called “Maya” -- as a lyricist, composer, singer and guitarist. “That was the very first Bengali group project done in the USA, and after the success of "Maya,” in 2000, we made the second mixed album, titled “Maya-2”.
Double R works extensively with all genres of music but he is also noted as one of the few avid promoters of Bangla hip-hop. He has worked with groups like Stoic Bliss, Impact and Dvs.
“Since it's a mixed Album, I've tried to include and incorporate as many genres as I could, like R&B, hip-hop, mellow rock, classical, modern and pop,” Double R said.
After he released his solo album “Mon Bhabe Tare” in April this year, he went back to the US and hopes to return after Eid.
"Since I have been working with lot of genres, I was able to catch people's attention.... And since I've been getting a lot of favourable feedback, I'll continue working and will try to come up with fresh, new sounds. Without my fans, I would be nowhere.”

The writer is a freelance contributor