The rise and fall and rise of politics 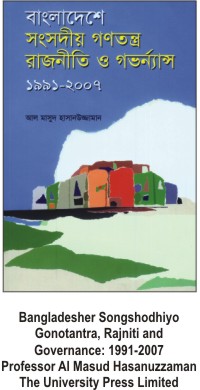 BANGLADESH began its journey as an independent country with a parliamentary system of government. It had been a foregone conclusion in the context of the Awami League, which was at the helm of the country's affairs following the liberation war. Tragically, however, the first blow to the AL's cherished form of government came from the party itself in January 1975 when Prime Minister Sheikh Mujibur Rahman declared Bangladesh as a one-party state with a presidential form of government. Since then Bangladesh has gone through military and civil-military authoritarian rule before the parliamentary form of government was reintroduced in Bangladesh in 1991 through the 12th amendment to the constitution. It was indeed a positive development since the amendment was carried through bipartisan move i.e., with the consensus of the two major political parties, the Bangladesh Nationalist Party and the Awami League. Great hope was raised in the country about the successful operation of parliamentary government. Unfortunately, however, expectations regarding an effective parliamentary system ensuring good governance in the country remained as elusive as ever despite bringing in the institution of non-party, neutral caretaker government, against the backdrop of confrontation between the AL and the BNP over the holding of free and fair elections.
In this context, Bangladesher Shongshodiyo Gonotantra, Rajniti O Governance: 1991-2007 by Professor Al Masud Hasanuzzaman deserves special attention. The author covers a period which has been very critical in our attempts to restore and stabilize our much vaunted democratic order, and critically analyses where we went wrong and what needs to be done in order to rectify the mistakes. He begins his book by giving a meaningful theoretical and historical account of the evolution of parliament in Great Britain. He then goes on to discuss how the British colonial rulers helped its phase-wise growth in the British Indian subcontinent, and how erstwhile Pakistan, after its independence from British rule in 1947, struggled to establish a functional parliament and how its experimentation failed, giving rise to the facade of a presidential form of government. This historical account will generate huge interest about parliament and the parliamentary form of government itself.
The second chapter is devoted to the actual functioning of parliament in Bangladesh during 1991-2007. In this context, the author analyses the issues in detail, beginning from the structure of the House, composition of the Fifth, Seventh and Eighth Parliaments, the legislative procedure of each House, a chronological development through which women's participation in parliament was ensured. The most outstanding discussion of this chapter is the author's analysis of the Committee System. His analysis covers the slow and gradual evolution of the Committee System from the Fifth through the Eighth Parliaments and pinpoints the weaknesses of the system. He concludes by stating that the achievements of the Committee System in Parliament since 1991 till 2007 have been mixed and the outcome is not very helpful.
The third chapter is about the party system in Bangladesh. It is common knowledge that parties are the 'life-lines' of democracy. Without a democratic and functional party system democracy cannot take root in any country. And Bangladesh is no exception. Unfortunately, however, as the author points out, the evolution of an effective and democratic party-system, which could have been the precursors of Bangladesh politics, did not happen in the then Pakistan. It is discerned that politics in the then East Pakistan (as part of erstwhile Pakistan) was characterized by civil-military authoritarian rule, and as such, in the absence of a democratic process the political development of political parties remained elusive. Similar development is also discerned in the political history of Bangladesh. The regrettable fact is that the political parties in Bangladesh, even during the much vaunted democratic order beginning in 1991, did not evolve into effective democratic institutions. The author in this chapter gives an account of the malaise that afflicts the major political parties, including the much needed internal democracy within the political parties.
In chapter four, the discussion revolves around a very interesting phenomenon in Bangladesh. Such a phenomenon came to the fore in the context of holding free and fair elections against the backdrop of alleged rigging in a Magura by-election when the major opposition party, the AL, propagated the idea that no free and fair elections could take place under a party government. The author reflects on why such a unique concept of a non-partisan caretaker government, in order to hold a free and fair elections, was incorporated, through the 13th amendment, into the constitution of the country. He also highlights the amended constitutional provisions as well as the caretaker regime's functioning and how it became controversial over the years, giving rise to an army-backed caretaker government that remained in power for two years instead of its constitutionally ordained mandate of three years. The future of democracy and its stabilization depended on a free and fair election under the aegis of a controversial army-backed caretaker government.
In the concluding chapter, the author cites various reasons for which even after the restoration of the parliamentary system in 1991, democratic order could not be established fully. The failure to establish a functional parliament has been cited as a major cause that has undermined the stabilization of democracy and good governance in the country. The author's recommendations in this regard are noteworthy and must be looked into and considered by the relevant segments of society.
Professor Al Masud Hasanuzzaman deserves our special thanks for bringing issues relating to a functional parliament and good governance in the country under one cover. He has remained focused all through on the issues concerned and provided recommendations that could alleviate the situation. The book is informative, has a rich bibliography and is a noteworthy reference work for a wide range of readers. The volume is thus required reading for all academics, researchers, and students both at home and abroad.

Professor Dilara Choudhury is an academic, political scientist and columnist.