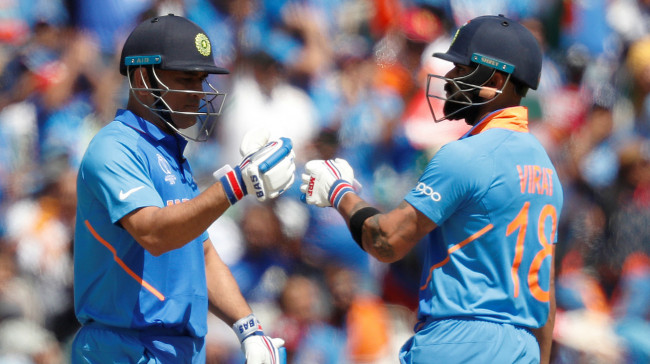 Mahendra Singh Dhoni's calculated batting in the middle overs has the full backing of the India team, skipper Virat Kohli said on Thursday amid criticism that the former skipper's slow approach has not worked in the World Cup.

Dhoni made 28 off 52 balls against Afghanistan, absorbing many deliveries before trying to accelerate and perishing as India had a narrow escape in the low-scoring game.

Against West Indies on Thursday too, Dhoni found it difficult to get going before hitting two sixes in the final over to remain not out on 56 off 61 balls.

His early struggle was even more conspicuous with Hardik Pandya hitting a breezy 46 during their 70-run stand.

Former team mate Sachin Tendulkar has questioned Dhoni's approach but Kohli threw his weight behind the 37-year-old after the team's 125-run victory over West Indies.

"He knows exactly what he wants to do out in the middle," Kohli said at the presentation ceremony.

"The best thing about having someone like him is when you need those extra 15-20 runs, he knows exactly how to get them with the tail.

"Keeping strike in the end and finishing off with two big sixes gave us a boost as a team. We were looking at 250 but we got close to 270-odd because he was out there in the middle.

"Hardik also played really well, but his experience has come good eight out of ten times for us."

Dhoni has played 346 one-day internationals and Kohli said the wicketkeeper knew better than most what was a par score on a pitch.

"He is one guy in the middle who always sends out a message for the team: 'I think this is the par score on this pitch'...he has such a keen understanding of the game."

"He has always been that way, that is his strength, to play calculated cricket, to always stay in the game, equal to the opposition and then find ways of winning.

"He's a legend of the game, we all know that. He's doing a tremendous job for us and hope he can continue."