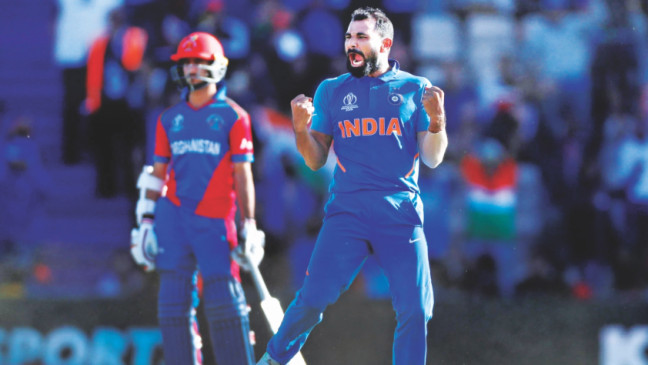 India fast bowler Mohammed Shami is ecstatic after taking the last Afghanistan wicket of Mujeeb Ur Rahman to complete a hattrick and seal a thrilling 11-run win in the ICC World Cup match in Southampton yesterday. Photo: Reuters
Reuters Reuters

India fast bowler Mohammed Shami has credited his sublime form at the Cricket World Cup to a new fitness regime he adopted after he was dropped from the squad last year following a failed 'yo-yo' test.

Shami picked up four wickets against West Indies in India's 125-run victory on Thursday which took his tally at the World Cup to eight from two matches, including a hat-trick in the final over against Afghanistan last week.

The 28-year-old came into the side after Bhuvneshwar Kumar injured his hamstring and Shami has retained his place despite Kumar regaining his fitness.

"I failed (the yo-yo test), that's true," Shami told reporters, referring to the endurance test employed by the Indian team to weed out unfit players. "The one thing is I have improved my fitness a lot."

The yo-yo test demands players run back and forth between cones spaced 20 metres apart with increasing speed and reduced time available to complete each shuttle.

"I'm in my comfort zone, I have lost weight, my rhythm is good. Everything is going well," Shami added.

"I am trying to ensure that I maintain that rhythm (and) that diet that I have been following. The moment I lost weight I found a rhythm for myself, there is a good feeling.

"Along with that... there is less tiredness so obviously the speed will increase. As far as skill is concerned, I have full faith in myself that whatever be the wicket I can express my abilities."

India's strength and conditioning coach Shankar Basu had said last week that failing the test was a blessing in disguise for Shami.

"After that, he was a changed man, he was so determined," Basu said. "The best part is he has changed his entire training regimen. I think training is now part of his lifestyle, which never used to be the case before."

India, second in the World Cup standings, need one more win to secure a semi-final spot and will play hosts England next on Sunday at Edgbaston.