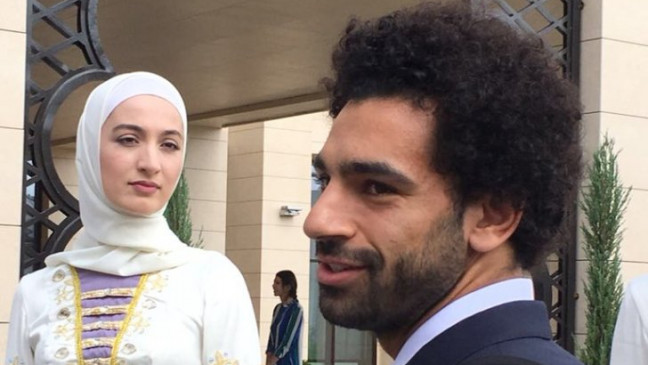 Egypt’s Mo Salah arrived in Russia with his wing ahead of their third appearance FIFA World Cup and the Pharaohs immediately treated to the traditional ‘lezginka’ dance by locals at the team’s base in Chechnya.

The squad will be based at ‘The Local Hotel’ in Grozny, the capital city of the Chechen Republic, as a Chechen pair in traditional Chechen dress performed the lezginka dance - a folk dance originating from the Lezgian people of the Caucasus region - as the players disembarked coaches outside the hotel.

The dance is traditionally performed by a man, often with a sword, and imitating an eagle. The dancer falls to his knees, leaps up, and dances with steps and strong, sharp arm and body movements like the bird.

When the dance is performed in a pair, couples do not touch; the woman dances quietly as she regards the man’s display.

Focus ahead of the World Cup has firmly been fixed on star player Mo Salah, who suffered a shoulder injury during last month’s Champions League final. Initial reports suggested he would miss the World Cup entirely, however, further news suggested last season’s Premier League Player of the Year could be available for group matches at Russia.

Salah recently expressed his certainty of being fit to face Uruguay on Friday in Ekaterinburg, having already promised to be fit for the game against hosts Russia on June 19 in St. Petersburg.

The seven-time African champions play their opening Group A fixture on Friday, June 15, against Uruguay.

Archaeologists on Friday unveiled a well preserved and finely painted tomb thought to be from the early Ptolemaic period near the Egyptian town of Sohag.

The tomb was built for a man named Tutu and his wife, and is one of seven discovered in the area last October, when authorities found smugglers digging illegally for artefacts, officials said.

Its painted walls depict funeral processions and images of the owner working in the fields, as well as his family genealogy written in hieroglyphics.

"The tomb is made up of a central lobby, and a burial room with two stone coffins. The lobby is divided in two", he said.

"It shows images of the owner of the burial room, Tutu, giving and receiving gifts before different gods and goddesses".

"We see the same thing for his wife, Ta-Shirit-Iziz, with the difference that (we see) verses from a book, the book of the afterlife", he added.

Around 50 mummified animals, including mice and falcons, were also recovered from the tomb.

Ptolemaic rule spanned about three centuries until the Roman conquest in 30 B.C.

Egypt's ancient sites are a draw for tourists and authorities hope new finds can help boost the sector, which has been recovering after foreigners were scared off by the North African country's 2011 popular uprising and the turmoil and insecurity that followed.

Sweden's preparations for their World Cup clash against Germany have been hampered by a stomach bug that has prevented three players from travelling to Sochi, where Saturday's game will be played.

Coach Janne Andersson revealed that defenders Pontus Jansson and Filip Helander, along with midfielder Marcus Rohden, were left behind at the team's tournament base further up Russia's Black Sea coast in Gelendzhik to avoid any danger of the illness spreading.

However, the hope is that they will recover to come to Sochi in time for the match.

"We have split the squad. We didn't bring them on the flight because we didn't know what had made them feel a bit queasy, but they will travel tomorrow," Andersson said at a press conference at Sochi's Fisht Stadium on Friday.

Sweden's team doctor said in a statement on the official Swedish FA website that the trio were "on the mend".

Of the three, only Leeds United defender Jansson played in Sweden's opening 1-0 win over South Korea, and that was because Manchester United's Victor Lindelof was ill.

Lindelof has travelled to Sochi and could return against Germany but there is a doubt over striker Isaac Kiese Thelin, who has an ankle problem.

While Sweden, who qualified for the finals after ousting Italy in a play-off, come into the game in a strong position, Germany are on the brink of a full-blown crisis.

A defeat at the hands of Mexico in the first match of their trophy defence means they cannot afford another slip-up in Group F on Saturday.

"This is really what you spend your whole career and life working towards. It is an extraordinary opportunity to be involved in a World Cup match like this," said Andersson.

"Whether we knock out Germany is one thing, but we have a chance to qualify and that is extraordinary."

Argentina legend Diego Maradona wished Lionel Messi on his 31st birthday through an Instragram post. Maradona posted a picture of him with Messi and captioned the image with a short dedication that read `Happy Birthday, Leo Messi’ accompanied by two emoji gifts:  a cake and an arm with a closed fist, as a sign of strength.

Maradona Supported Messi on his last match against Croatia, where the Argentine playmaker came under intense criticism from his countrymen.

Messi’s team mates and friends also celebrated his birthday, he was presented with birthday cake by Argentina team-mates as some of them posted some pictures with Messi on social media. Sergio Aguero wished Messi a happy birthday with a post on his Instagram. The 31-year-old also took time out to meet some of his team-mates' children.

Argentina are gearing themselves up for their final group game against Nigeria which will be held tomorrow at 12 pm in Bangladesh time.

The fans are always interested about how their rivals are doing in tournaments like Copa America and the World Cup.

Lionel Messi cut a lonely figure as Argentina fell to a demoralising 3-0 defeat at the hands of Croatia at which has left their qualification hopes hanging by a thread.

Both Brazil and Argentina drew their opening games at the 2018 World Cup. Brazilians however found something to celebrate as they mocked Argentina’s star player.

Egypt re-elected Abdel Fattah al-Sisi as president for another four-year term on March 28, 2018. The result of the election was foregone. Sisi has been accused of sidelining or intimidating several powerful candidates, leaving only another candidate in the race. According to the results, Sisi won 92 percent of the votes cast. Out of 60 million voters, only 41.5 percent cast their ballot which is far less than half the total voters. The only other little known candidate Moussa Mostafa Moussa got less than 10 percent votes.

Egypt has traditionally been ruled by the army since the days of Gamal Nasser (1954) followed by Anwar Sadat (1970) and Hosni Mubarak (1981). For Egyptians President Sisi is not an aberration but the norm. Egyptians are proud of their army and see the army as the saviour of the country. Maintaining stability in the country is of utmost importance to the army generals, rather than establishing a democratic process of governance. The unforgiving western media, insensitive to local political dynamics, has castigated Sisi for stifling democracy in Egypt. In order to appreciate the current state of affairs in this Afro-Asian nation one has to look at the period of Arab Spring, which brings two aspects to this election—internal and regional.

Within the army officers' corps the contest to get to the top is a natural phenomenon. Understandably, Sisi as the incumbent president used his authority and powers to set aside all challenges to his position. Sisi apparently did not want to make this election a one-horse race. Thus the other candidate was allowed into the fray to give it some respectability.

Internally, Egypt went through traumatic times when the Arab Spring uprising broke out at Tahrir Square in January 2011. The country is still smarting from the effects of the revolution having lost its pre-eminent position in the Arab world.

Gamal Nasser's political opposition to Britain and France and wars with Israel had established him as the firebrand of Arab nationalism. Egypt was seen as the bulwark of Arab politico-military strength given its geo-strategic position, its military strength and its civilisational history. On the other hand, Egypt's geographical closeness to Europe and its relations with the West have helped the growth of liberal secular traditions in society. All these achievements suddenly seemed to have evaporated at Tahrir Square in 2011.

Egypt's Arab Spring experiment with democracy has been a bitter one. The rioters at Tahrir Square wanted ouster of President Hosni Mubarak and free and fair elections for a true democratic government. Multi-party presidential elections were held in May 2012. What they got after Hosni Mubarak's ouster was a Muslim Brotherhood government of Mohammad Morsi. Mohammad Morsi's yearlong (June 2012–July 2013) presidency was a period of total chaos and turmoil, with the economy diving to the lowest point. The Brotherhood through its well-oiled machinery had tried to steer the religiously moderate country towards a "Sharia" based society. As the divided country drifted more and more towards ultra-conservative Salafi Islam, the secular army generals stepped in to overthrow Morsi and stem the country's dive from the brink of total collapse. Morsi is now in jail.

Though the Brotherhood is banned in Egypt its spectre continues to destabilise Sisi's government through its regular attacks on the security forces and mosques in Sinai. Another strategy of the Muslim Brotherhood is to frequently attack the Christian churches. These attacks have already cost over a thousand lives over the past four years.

On the regional front, Egypt is surrounded by an extremely unstable neighbourhood. It is under pressure because of the wars that are ongoing in Syria and Yemen, and the deeply precarious security situation in Libya. The realignment of forces in the greater Middle East—blockage of Qatar, Iran's threat, Saudi Arabia's aggressive role in the region, and Turkey's increasing involvement in Arab affairs—has added to Cairo's  trepidation. Above all the extreme regional tension with Israel, following President Donald Trump's audacious declaration over Jerusalem, has made it imperative for Sisi to maintain stability in Egypt.

Not surprisingly, this election has revealed the apathy of the majority of people to the election process. At least the voter turnout says so. In 2014 the turnout was 47 percent. Certainly the election was not a popularity contest for Sisi. It was actually an exercise to legitimise the rule of Sisi who seized power in 2013. What's curious is that the National Election Authority warned that those who did not vote because of any cogent reason will be fined 500 Egyptian pounds. Clearly, Sisi tried to get the approval of the majority of Egyptians.

Interviews of those who went to the polling booths to vote for Sisi reveal that they do not want a return to the days of the Muslim Brotherhood. President Sisi will be faced with formidable challenges during his second term. The most important challenges are elimination of Muslim Brotherhood-organised terrorism in all its forms, turning around the economy and, above all, maintaining stability in the country.

Mahmood Hasan is a former ambassador and secretary of the Bangladesh government.

Follow The Daily Star Opinion on Facebook for the latest opinions, commentaries and analyses by experts and professionals.

To contribute your article or letter to The Daily Star Opinion, see our guidelines for submission.