Messi, Ronaldo a win away from quarterfinal showdown 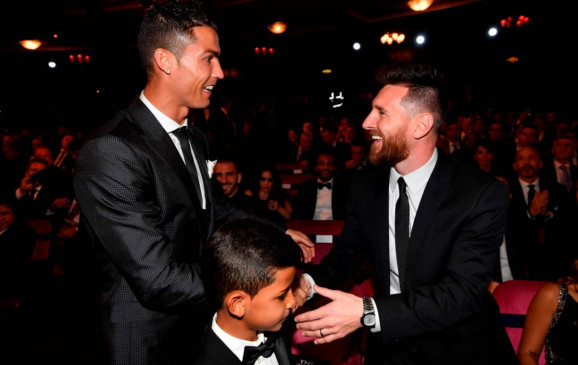 The ongoing FIFA World Cup have already provided a lot of brutal results with Germany’s 2-0 defeat against South Korea being the latest. However, the big stars are yet to face off against each other except when Cristiano Ronaldo’ s Portugal faced off against a star-studded Spain in Group B.

However, the level of excitement could go up to a whole new level if the two biggest stars in the world faced off. That is exactly what could happen if Lionel Messi’s Argentina and Cristiano Ronaldo’s Portugal win their matches against France and Uruguay respectively.

Cristiano Ronaldo has had a better World Cup than Lionel Messi so far, scoring four goals in three matches so far while Lionel Messi has scored only one. Cristiano struck a hattrick against Spain in his team’s opening fixture. Where both stars have something in common is that they both missed from the penalty spot in Russia with Messi seeing his penalty saved against Iceland while Ronaldo missed the opportunity to catch up with Harry Kane at the top of the World Cup scoring list following his miss against Iran.

However, all the stats and trivia dwarf in comparison to the thought of these two larger-than-life footballers coming together for a match. While the two have squared off countless times for their respective clubs in the La Liga, Messi and Ronaldo have not faced each other much at the international level.

First off though they need to beat strong Round of 16 opponents in the shape of France and Uruguay in order to come face to face. If a Portugal-Argentina tie does take place, it will drive World Cup fever to a whole new level.

Lionel Messi lifted Barcelona out of their recent malaise with a magical display as his side beat Tottenham Hotspur 4-2 in a thrilling Champions League Group B clash at Wembley on Wednesday.

Provided with the grandest of stages and 82,000 fans, the Argentine maestro responded by scoring two goals to take his Champions League haul to 105, instigating two others and twice being denied by the same upright.

Messi, 31, was applauded off by both sets of fans after an absorbing advert for the Champions League which left Barca joint top of the group on six points with Inter Milan. Tottenham face back-to-back games against PSV Eindhoven with both teams having lost their first two matches.

Injury-hit Tottenham faced an uphill task against the five-times European champions once Philippe Coutinho scored after two minutes and when Ivan Rakitic's breathtaking volley made it 2-0 before halftime a hammering looked on the cards.

But Barcelona needed the mercurial Messi at his best to repel a tenacious Spurs fightback as Harry Kane and Erik Lamela gave the hosts, described as "heroes" by their manager Mauricio Pochettino, a glimmer of hope.

Only when Messi struck his second in stoppage-time, his fifth of this season's tournament after a hat-trick against PSV, could coach Ernesto Valverde breathe a little easier.

"After a few bad results it was important to do well today. Our response was very good," Valverde, under the cosh after Barca drew two and lost one of their last three La Liga games, told reporters.

"The game was very tense. We had a few problems during the game but we managed to solve them."

Pochettino said his plan had gone out of the window after his side's woeful start.

"I'm disappointed with the result but the effort was massive," he said.

Barcelona were vulnerable so they said, but on a pitch scarred from hosting British heavyweight champion Anthony Joshua's fight against Alexander Povetkin they took only two minutes to catch Spurs in the solar plexus.

Tottenham allowed Messi time to curl a pass to Jordi Alba on the left and with keeper Hugo Lloris, back from injury, charging out Alba cut the ball back to Coutinho who drilled home through a gaggle of defenders.

The hosts responded with Kane firing in a shot that did not have enough venom to worry Marc-Andre ter Stegen.

Messi opened up Tottenham again in the 28th minute. His floated pass was chested down by Luis Suarez to Coutinho whose volley sliced up in the air before the quick-thinking Brazilian hooked the ball back to Rakitic who rifled a picture-perfect right-foot volley in off the post from 25 yards.

Messi, who scored for Barca in the 2011 final against Manchester United at Wembley, revelled in the wide-open spaces and twice sliced through the Spurs defence shortly after the break, thudding shots against Lloris's right post.

Instead of being 4-0 down, however, Tottenham striker Kane halved the deficit in the 52nd minute with a clinical finish.

Messi shook his head in disbelief but soon silenced the home crowd again -- this time side-footing inside the post from Alba's cross to finish a flowing move he started.

There was no let-up and after Kane worked hard to win the ball, Lamela gave Spurs another lifeline when his 66th-minute shot flicked off Clement Lenglet and past Ter Stegen.

A gallant Tottenham side, missing the likes of Dele Alli, Christian Eriksen and Jan Vertonghen, almost levelled when Lucas Moura's shot deflected wide but Messi ended their resistance after again being picked out by Alba.

Juventus forward Cristiano Ronaldo was among the first 10 nominees for the men's Ballon d'Or trophy announced on Monday, awarded by France Football magazine to the best player in the world.

The Portuguese has won the award for the past two years and five times in total, a record he shares with Argentine Lionel Messi who is expected to be included on the 30-man shortlist named throughout the day.

Ronaldo's nomination comes after the 33-year-old last week denied rape allegations levelled against him by a woman who sued him in court in the United States.

Sportswear maker Nike Inc and video game maker Electronic Arts Inc, who both have worked with the five-times Champions League winner, said last Thursday they were concerned about the allegations.

A panel of journalists select the Ballon d'Or winner which was first established in 1956 and will this year feature a women's award for the first time.

The award merged with the FIFA World Player of the Year prize from 2010-15 to create the FIFA Ballon d'Or, but returned to France Football magazine in 2016 while FIFA established The Best awards.

David Beckham will be thinking of restaurants with delicious food as he won a friendly England versus Sweden bet against Zlatan Ibrahimovic, with the terms of the bet stating that if England beat Sweden in the quarter-final to book a place in the World Cup 2018 semi-final, Zlatan would be buying dinner for Beckham where ever he wants in the world.

England defeated Sweden 2-0 in their quarter final match of the World Cup—courtesy of goals from Harry Maguire and Dele Alli and booked a place in the semi-finals of the tournament.

The two former Paris Saint-Germain team mates entered into a wager ahead of the quarter-final clash between England and Sweden. Ibrahimovic was the one who initiated the bet through social media and Beckham also responded promptly.

Ibrahimovic vowed to take ex-England skipper Beckham out for a meal at any restaurant in the world if he found himself on the losing side.

The terms of the deal have been set#SWEENG pic.twitter.com/9bJ3D5nHWv; LA Galaxy (@LAGalaxy) July 6, 2018

That promise was countered by Beckham that Ibrahimovic could pick any item he wanted from Ikea if the Three Lions came unstuck.

As Gareth Southgate’s side continued their impressive run in the World Cup 2018 and came over Sweden after a comfortable 2-0 victory, Beckham can start readying himself for a delicious treat. However, Ibrahimovic would now have to join Beckham at an England game, wearing an England shirt and indulge in an English delicacy at the interval, as per the terms of the bet.

Ibrahimovic is yet to comment on the bet since full-time, but he did express his enormous admiration for the players who reached the quarter-finals.

Every player should get a golden ball in Sweden. What they did will be remembered forever. Thank you for the show pic.twitter.com/VsoaUY6W99; Zlatan Ibrahimović (@Ibra_official) July 7, 2018

“Every player should get a golden ball in Sweden,” Ibrahimovic tweeted. “What they did will be remembered forever. Thank you for the show.”

Argentina manager Lionel Scaloni has heaped praise on Lionel Messi for his sensational performance against Estonia in a friendly on Sunday.

The 34-year-old headed into the international break off a disappointing debut campaign with Ligue 1 giants PSG, scoring only 11 times across competitions. Messi, though, put his struggles behind him, helping Argentina win the Finalissima with a 3-0 win over Italy on June 1, providing two assists and creating four chances.

"I don't know what else to say. It's very difficult; it's like Rafa Nadal, what are you going to say? It is preferable that the journalists speak, that they speak. You have no words left to describe it, and above all, for everything it generates,"

The former Barcelona star then left Scaloni stunned by scoring all five goals in Argentina's 5-0 victory over Estonia on Sunday. He opened the scoring in the eighth minute, converting a penalty, before adding a second in the 45th. Messi then scored thrice in 30 minutes in the second half.

Scaloni expressed his astonishment at the PSG forward's quality and professionalism. The 44-year-old compared his compatriot to tennis star Rafael Nadal, who won his 14th Roland Garros (22nd Grand Slam) title in Paris on Sunday.

"I don't know what else to say. It's very difficult; it's like Rafa Nadal, what are you going to say? It is preferable that the journalists speak, that they speak. You have no words left to describe it, and above all, for everything it generates," said Scaloni as per TVP.

Footballing star Lionel Messi will be hoping to impress fans when he makes an appearance in the second season of the Argentinian TV series, Los Protectores.

Messi is one of the most iconic stars of the game, having reached legendary status for both Barcelona and PSG, as well as being the undoubted star of the Argentinian national team.

However, he's looking to try out something new as he is set to feature in his first-ever acting role.

From various food commercials, to Pepsi spots, or the recent Lay's potato ad campaign. And of course, everything that has to do with Adidas, his biggest sponsor.

The scene in which Messi will appear has already been shot

However, the soccer player has now been cast in a project that is very different from what we are used to seeing him in. He has now had a role in a television series.

Messi will make a cameo appearance in the second season of the Argentine drama 'Los Protectores,' which is gaining popularity in his homeland.

His scene has already been shot, and he completed it just a few days ago. We know this because the images of the footballer on set were shared by the producer himself.

The second season of 'Los Protectores' was shot in a variety of locations, including Buenos Aires, but Messi recorded it in Paris, his home since signing with PSG last summer. We'll have to wait until 2023 to see Leo Messi's interpretation, when the second installment of this Argentine series is released.