100 indigenous families at a loss 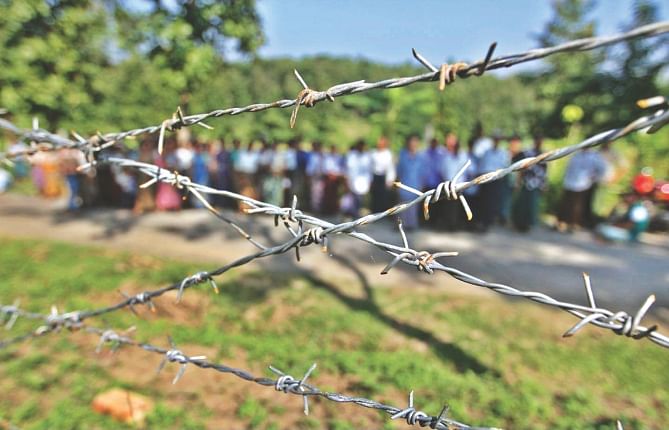 This barbed-wire fence has been put up around 34 acres of land to build the BGB headquarters in Bandarban. People of two Marma villages are dependant on the land. Photo: Anurup Kanti Das

The acquisition of land for building BGB sector headquarters in Bandarban threatens the means of livelihood of more than 100 indigenous families.

More than a month ago, the home ministry gave its approval to acquire 34 acres of land for building the headquarters along the Bandarban-Rowangchhari road in Bandarban Sadar upazila.

Inhabitants of two Marma villages claimed that the community land, which provided them with a livelihood and a cremation ground, fall within the area earmarked for the headquarters. The area was sealed off with a barbed wire fence by the BGB a month ago.

"Of the 200 people living in this village, only 30 own land. Most of the landless people earn a living from jhum cultivation and working as land labourers on the community land," said Mong Kya Ching, a 27-year-old youth of Krykhyong village. 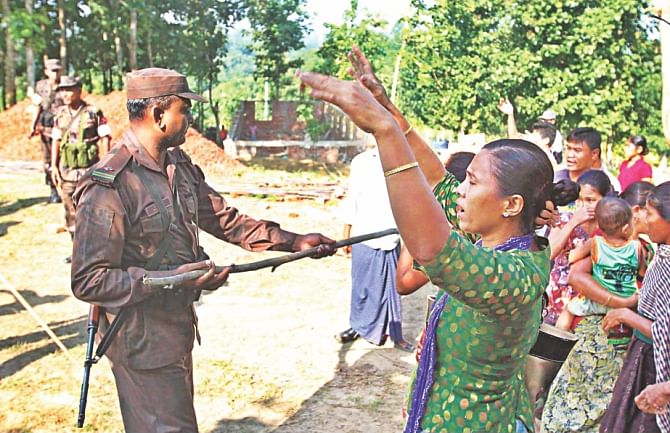 Landless peasant Ada Fru Marma provides for eight members of his family by collecting firewood and working in the orchards inside the area.

Speaking through an interpreter, he said, "After the BGB surrounded the land with wired fences, I could not enter the place."

Only 450 acres of land are currently available for jhum cultivation for 500 landless families in 11 villages of the mouza, said Nue Mong Pru, headman of the 348 Hlapaikhyong mouza.

At least 2,000 acres of arable land are required for the sustenance of 1,500 families who live in the mouza, he added.

Col Waliur Rahman, sector commander of Bandarban BGB, said that the area was fenced a month ago following the home ministry's approval, although the acquisition process was yet to be completed.

KM Tariqul Islam, deputy commissioner (DC) of Bandarban, said the BGB fenced the area and deployed personnel to prevent anyone from entering the land and claiming it to be theirs.

Visiting the area on October 20, a team of journalists witnessed that construction of a brick structure was going on.

Inside the fence, a walking path -- with mango, banana and other fruit bearing trees, and a few patches of paddy plants on both sides -- led towards a stream where a freshly painted signboard read "The cremation ground of Krykhyong village". 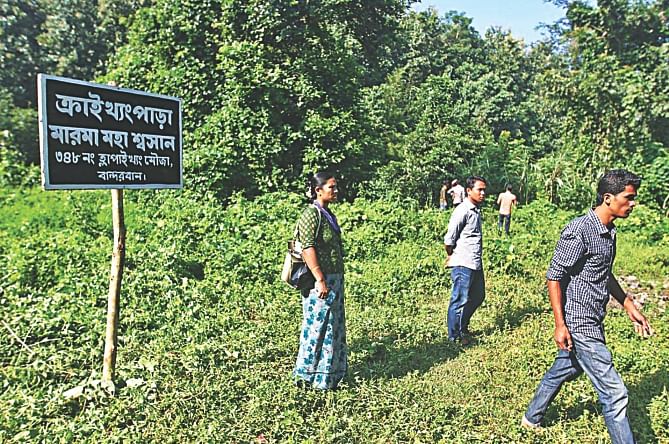 A signboard marks Krykhyongpara cremation ground which falls within the land that the BGB has fenced to build its Bandarban headquarters. Photo: Anurup Kanti Das

The place is covered with undergrowth because our custom does not allow clearing an area where dead bodies are burned, said villagers of Krykhyong, who were allowed in the premises with the journalist team.

A blackened spot with pieces of burnt charcoal was seen at one corner. A few flies were hovering over the round spot.

However, the DC who headed the land acquisition committee, told journalists that he had not seen any cremation ground when he visited the area.

Col Waliur also made similar claims: "It was a totally empty land with no fruit trees or jhum plantations when our representatives had gone to check the place with the land surveyors."

However, both Tariqul and Waliur assured that if a cremation ground at all existed within the area, it would be made accessible along with the path for locals.

As for their livelihood, the DC said, "There are hundreds of acres of land within five kilometres of this area. Aren't they doing jhum cultivation there? Why would acquisition of this particular 34 acres bother them?"

Meanwhile, neither the Headman nor the karbaris (village chief) of the two villages had been consulted before the acquisition process began.

According to the Hill Districts Council Act, 1998, the deputy commissioner of the district requires pre-permission of the corresponding Hill District Council Chairman to acquire any land.

"The chairman, on the other hand, should consult the matter with the headman and the karbaris, investigate whether using the land for a particular purpose would create any trouble," said KS Mong, a member of Chittagong Hill Tracts Regional Council.

"He cannot give his approval without following a procedure," he added.

Dr Mesbah Kamal, technical coordinator of the parliamentary standing committee on Indigenous Affairs, said it is customary of the DC to consult the Headman and karbaris of the area before finalising any land deal.

Headman Pru said, "Neither I nor my karbaris were consulted before the acquisition process began."

On September 29, 2013, locals submitted a memorandum to the prime minister through the DC describing their problems. Their prayer fell to deaf ears.

However, when 17 Bengalis appealed to the DC on December 12, 2012, for acquiring their 15.80 acres of land in Tarachhya mouza's Changya Danesh neighbourhood in Rowangchhari upazila, their prayer was heeded.

According to KS Mong, the land in Changya Danesh was chosen first for the BGB sector headquarters.

The Daily Star obtained a copy of a letter along with a report copy dated 02.04.2013 written by Mohammad Saiful Islam Majumdar, Upazila Nirbahi Officer, Rowangchhari.

That letter shows that the UNO, upon visiting the proposed land where 16-17 Bengali families live, suggested acquiring another piece of land about 500 yards away from a brick field.

In another letter written to the DC, which is dated 30.04.2013, locals of Tetulia Marma para and Faykhya Marma para complained that the UNO of Rowangchhari sent surveyors to measure their lands, instead of the 25 acres in the adjacent Changya Danesh originally proposed for acquisition.

However, both the DC and the BGB sector commander said that the first choice for acquisition was Tetuliapara, a neighbourhood inhabited by indigenous people. This claim was protested by indigenous groups living there.

Neither of them made any             mention of any protest by the Bengalis with regard to the land acquisition.