10 most distinctive roles of Robin Williams 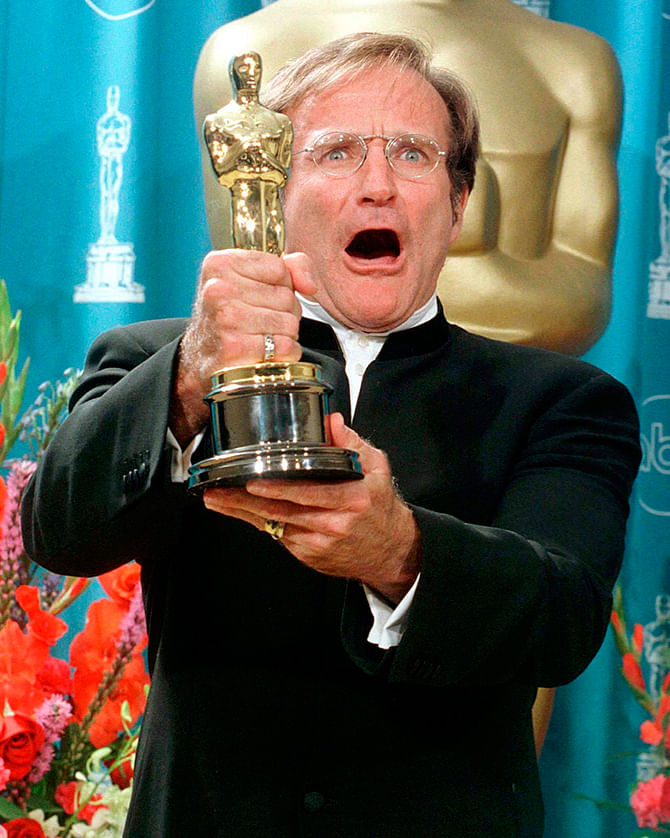 Robin Williams holds his Oscar after winning Best Performance by an Actor in a Supporting Role for his role in "Good Will Hunting" at the 70th Annual Academy Awards in this file picture taken March 23, 1998. Oscar-winning actor and comedian Robin Williams was found dead on August 11, 2014 from an apparent suicide at his home in Northern California, Marin County Sheriff's Office said. He was 63. Photo: Reuters

The kinetic bundle of energy that was Robin Williams took on many forms during a long and versatile career. He may have been best known for his fast-talking, funnyman roles, but he mesmerised in serious ones as well — creepy ones, too — and was memorable well beyond the big screen: on television, on the comedy stage, even on Broadway. Here are 10 of Williams' most distinctive roles — and the list could be much longer:

"GOOD WILL HUNTING" (1997) — A rare but welcome serious role for Williams, who played the stubborn yet empathetic therapist who was somehow able to help math prodigy Will Hunting (Matt Damon) figure out how to handle his life. Won a supporting actor Oscar.

"MRS. DOUBTFIRE" (1993) — Who couldn't love a bumbling dad who dressed up as a portly nanny — with a latex mask, a wig and a Scottish accent — in order to spend time with his young kids? (A sequel was in the works.

"ALADDIN" (1992) — Will it ever be possible to see a cartoon genie and not think of Williams? Remember him shooting out of that bottle: "Ten thousand years will give you SUCH a crick in the neck!"

"GOOD MORNING, VIETNAM" (1987) — Williams' fast-talking style was perfect for the role of a DJ on Armed Forces Radio during the Vietnam War. (First Oscar nomination.)

"ONE HOUR PHOTO" (2002) — Another serious role, and it was a creepy one: Williams played a photo counter worker at a huge suburban store who got a little too involved in the lives of his customers when he realized one of them was having an affair.

"DEAD POETS SOCIETY" (1989) — Played an unconventional poetry teacher who taught his Vermont boarding school students to stand on their desks, think on their own, and "seize the day." (Second Oscar nomination.)

"THE FISHER KING" (1991) — Williams played a half-mad homeless man, convinced that the Holy Grail was sitting in the Fifth Avenue abode of a billionaire. (Third Oscar nomination).

"MOSCOW ON THE HUDSON" (1984) — Williams played a Russian — and quite credibly, too — in this film about a comically lovable circus saxophonist, Vladimir, who defects while touring New York (turning himself in at Bloomingdale's, naturally.)

"BENGAL TIGER AT THE BAGHDAD ZOO" (2011) — Appearing on Broadway, Williams gave an admirably thoughtful performance in the role of a tiger — actually, the ghost of a dead tiger — locked up at the Baghdad Zoo at the time of the U.S. invasion in 2003.