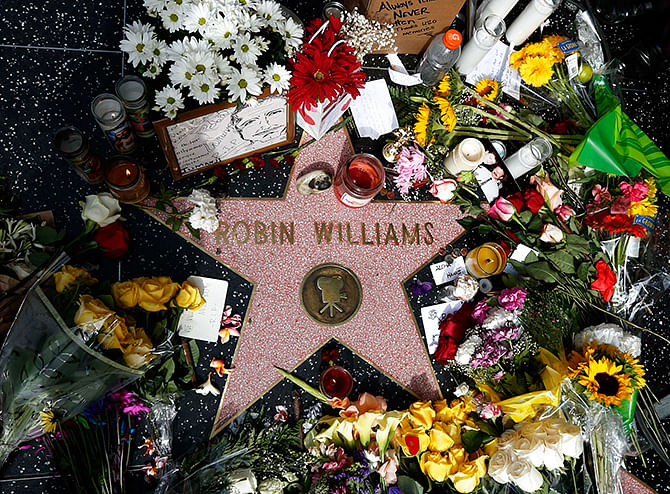 Flowers are seen on the late Robin Williams' star on the Hollywood Walk of Fame in Los Angeles, California August 12, 2014. Photo: Reuters

The children of late actor Robin Williams have said that "the world will never be the same" without him.

Among heartfelt tributes to her father, daughter Zelda said: "One of his favourite things in the world was to make you all laugh."

But she added she would "never understand" how Williams could "not find it in his heart to stay".

Police in California confirmed that the 63-year-old actor took his own life at his home.

Marin County Sheriff's Lt Keith Boyd said Williams, 63, had been treated for depression and killed himself by hanging.

The screen star's eldest son Zak said in the wake of his death: "Yesterday, I lost my father and a best friend and the world got a little greyer."

Cody, the youngest child of Williams, added: "I will miss him and take him with me everywhere I go for the rest of my life, and will look forward, forever, to the moment when I get to see him again."

The actor's former wife, Marsha Garces Williams, added to a tribute already made by his wife Susan Schneider.

"My arms are wrapped around our children as we attempt to grapple with celebrating the man we love, while dealing with this immeasurable loss," she said, referring to Zelda and Cody.

Comic and actor Russell Brand also wrote an opinion piece about Williams' passing in The Guardian, saying that he was "plugged into the mains of comedy".

He added that Williams "still hadn't come to terms with being Robin Williams".

"I might be nice to people, mindful today how fragile we all are, even when fizzing with divine madness that seems like it will never expire," concluded Brand.

Williams was remembered on long-running US TV programme The Tonight Show on Tuesday night, on which he made numerous fast-talking, frenetic appearances starting with his debut in 1981.

Host Jimmy Fallon called Williams "one of a kind - he was one in a million". He added: "He was the Muhammad Ali of comedy."

Disney paid tribute to the star via Twitter with specific reference to his role as the genie in Aladdin, calling him a "true Disney legend and a beloved member of our family".

"He was an incredible actor and a comic genius and will always remembered for bringing some of the world's favourite characters to life," they added.

Williams' daughter Zelda, meanwhile, has said she is considering deleting her Twitter and Instagram accounts after receiving offensive responses to her father's death.

Two Twitter accounts have since been shut down following the messages.

Zelda Williams' most recent tweet stated: "I'm sorry. I should've risen above. Deleting this from my devices for a good long time, maybe forever. Time will tell. Goodbye."

Robin Williams was famous for films such as Good Morning Vietnam and The Fisher King and won an Oscar for his role in Good Will Hunting.

In the past, Williams had talked and even joked about his struggles with alcohol and drugs. His representative said on Monday that he had also been "battling severe depression".

He had recently returned to a rehabilitation centre to "fine-tune" his sobriety, the Los Angeles Times reported in July.