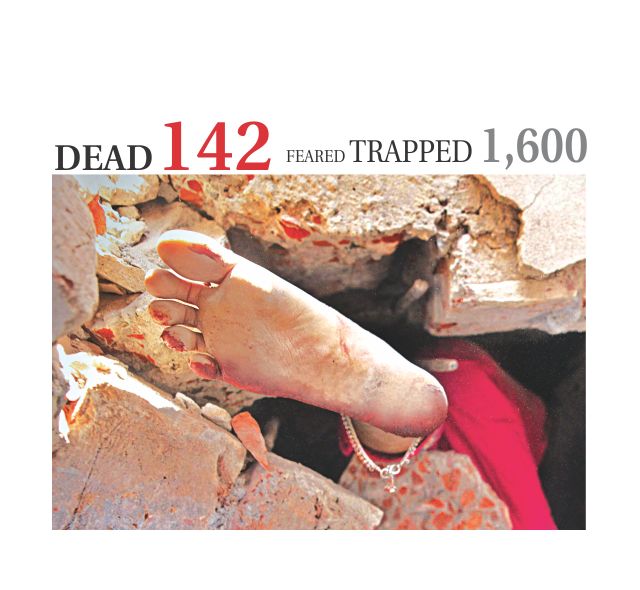 DEATH OF A DREAM … She put on her anklets and showed up for work yesterday, probably still unsure whether to get in after the scare on Tuesday when a rumble was heard coursing through the building, leaving cracks behind. Assured that everything was okay, she went in, not knowing the day would be her last, that her world would come crashing down. Her anklets do not make music anymore. The unmoving foot speaks of a life forever stilled. Photo: Rashed Shumon

Rana Plaza is now a mountain of jumbled concrete debris. Concrete pillars of every shape dangle precariously, ready to snap and crash down. Close to the top just under a bundle of cloth lies the half-buried body of a woman. A huge pillar lies across her. Her blood-spattered hair has grown stiff.
Nobody takes much notice of her. Rescuers clamber around, peeking into hundreds of crevices of the heap of debris that was once a nine-storey building.
The dead can wait for now. More important are those who are trapped alive. Nobody can actually say how many are trapped but it would not be less than 1,600, on top of the 142 already confirmed dead as of 2:30am today. More than 1,000 others were injured one way or the other.
Time is running out and the extreme heat is taking a toll on the survivors buried under the collapsed building.

Six of the nine floors of the building housed garment factories. The deputy general manager of Ether Garments that was on the sixth floor was rescued alive. He said his factory had 450 workers working.
If that be the case, then those six floors of factories had about 2,500 workers working in them. So far, about 1,000 have been rescued. The rest are trapped under the debris, many of them alive.
Ether DGM Kamruzzaman said he and many of his colleagues survived because the ceiling crashed on furniture and empty space.
“It was pitch dark all around and I have seen many people crawling around in the light of their mobile phones,” he said.
Only Kamruzzaman could come out.
Jotsna Akhter, another survivor, was working on the sixth floor. She survived because the ceiling crashed on the sewing machine tables and the empty space around it.
“There were at least a dozen others with me. One of them died. But the rest were alive,” she says.
But the rescue operation has proved to be painstakingly difficult. The pillars and ceilings have collapsed at so many angles and in such precarious ways that any wrong move could cause a fresh tragedy.
The army has brought in huge cranes to pull the concrete blocks apart. But until late afternoon, these could not be used for fear of further disaster.
“We are going to bore holes through the roof and go inside,” said Brigadier General Mohammad Siddiqul Alam Sikder, who is supervising the rescue operation. “We have to be extremely careful.”
Fire brigade men have assembled too. The body of a six-year-old boy was the first they pulled out from beneath the rubble.
“We cannot go in for fear of further collapse,” a fireman said.
Oxygen cylinders have been taken to the site to supply fresh air into the holes and crevices.
Cutters and machines to bore holes have been assembled too. Generators have been installed to supply electricity at night.
But the local rescuers and families of the victims are trying to do the job on their own.
They are frenziedly burrowing into the rubble with bare hands and whatever tools they can get hold of. Volunteers have lined up to pass the rubble away. And they are getting some successes too.
“One can hear the screams of those trapped inside. Some shout for help, others want some oxygen," said Abdus Sattar, a local volunteer.
Every few minutes a trapped person is pulled out and whisked off to the hospital in an ambulance. Local hospitals have provided 30 to 40 ambulances in addition to the ones from the army.
About two dozen workers and employees of Sarker & Brothers, a distribution point of Nestlé Bangladesh, were also trapped after Rana Plaza crumbled on the adjacent two-storey building that was housing the wholesale centre.
The rescue operation is now turning into a race against time. The entire nine-storey is sandwiched into a two-storey height. How to reach the bottom without upsetting the structure now poses the main challenge.
One hurdle to a faster rescue operation is the lack of cutter machines, said Lt Col Md Moin Uddin, commanding officer of the 3rd Engineering Battalion of Savar Cantonment.
“We have sufficient manpower. But we need more cutter machines to remove concrete and we are trying to speed up our activities with only eight cutter machines," he said, requesting more oxygen cylinders and cutter machines from the disaster management authorities.
Moin Uddin said the rescue operation would continue for two more days.
“Will he survive two more days?” asks a weeping mother, Shakila, who came all the way from Jamalpur on hearing the tragedy.
She shows a picture of her son, Idris, to others and wails: "Where is my Bazan [son]? Bazan, where have you gone?”