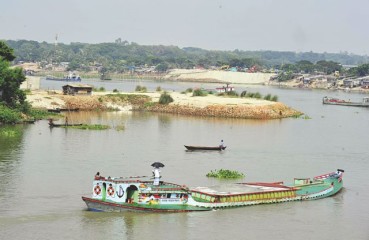 Tourism prospects of the country's riverine beauty do not only remain untapped but also face a steady decline of the inland river ways losing navigability and past glory, thanks to lack of maintenance and desired services.

The rosy prospect of riverine tourism faded with successive governments having ignored the sector decade after decade.

People in general and tour operators lament the decline on lack of safe and tourist-friendly river vessels.

The foreign tourists in particular are interested in exploring the people, local culture, nature and serene beauty of the rivers. They also show interests to hilly rivers and wetlands like Haor.

Of a total of nearly 5,500 tourists guided every year by Bengal Tours, 35,000 are foreigners, said its director M Rafiqul Islam. 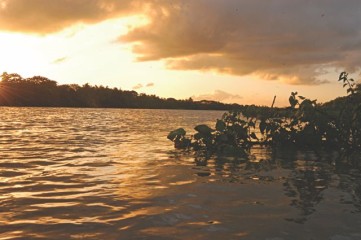 At least one-third of total foreign tourists express interests for a full-length river tour that helps savouring river journeys and knowing local people, he said, they like to avidly enjoy the scenic beauty of rivers parallel to none other; know about them and the picturesque pristine countryside.

No other means is as good for tourism as river way because it provides the most flexible, comfortable and pleasant travel and serves the tourism purpose most.

The rivers being a breathtaking way of savouring the magnificence of nature reflect the traditional ways of life, the people and nature.

The serenity and texture of riverine landscapes vary from one another with romantic appeal -- sometimes in a dramatic way, permeating a sense of pleasantness to the beholders.

Life on Char (shoal) presents a glimpse of how struggling people's survival depends on whims of nature. 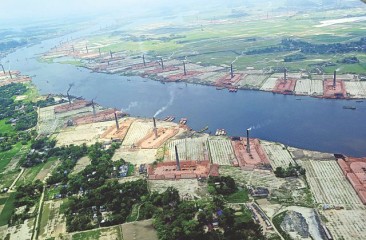 Though most part of the country used to be linked by a complex network of waterways in yesteryears, emergence of silted lands in different river channels like Padma and Brahmaputra has made navigability either impossible or difficult.

Bangladesh is such a delta, where various international groups come for research work, on academic purpose and making television documentary and short films round the year, said Nazrul Islam Bachchu, proprietor of Pugmark Tours and Travels.

There are foreign tourists interested in visiting inland and coastal islands like Hatia, Swandeep and Bhola. But tourist-friendly services are missing.

Most of the river vessels run on private ownership along the waterways are either crowded or in poor condition or perceived as unsafe. Therefore, tourists do not rely on them.

Though private operators have introduced some glitzy launches recently on Dhaka-Barisal route catering to day-to-day passenger services, they do not meet tourist purposes of delighting in captivating riverine beauty, as those ply during night time and do not cover an entire route covering Dhaka, Barisal, Morelganj, Mongla and Khulna in one go.

The rest of private services are not up to the mark to meet tourists' needs either. 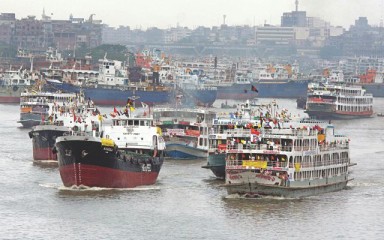 Earlier, until last year, tourists from Dhaka could travel through Barisal, Morelganj, the Sundarbans, Mongla, Khulna, northern districts, Srimongal and back to Dhaka on steam ships. But now such elaborate tour is not possible due to disruption in Ghashiakhali channel after Morelganj.

After nearly a century of plying the rivers of Bangladesh, the once majestic paddle steamers are now pale with worn-out engines and failing paddles.

The paddle-run rocket steamer services of BIWTC had a bright business prospect but the regal legacy of the colonial period has experienced consistent decline over the past century.

The foreign tourists in particular are interested in paddle steamers because of its legacy, antique appeal and convenience. Paddle steamer is popularly believed to be safer than propeller vessels.

BIWTC used to operate steamer service from Dhaka through Chandpur, Barisal, Jhalakathi, Pirojpur, Morelganj, and Mongla to Khulna. But they have presently shortened the route to Morelganj due to lack of navigability in Ghashiakhali channel.

Inland passenger steamer service has been disrupted from Morelganj to Khulna over nearly past two years due to siltation in a six-kilometre stretch of Ghashiakhali channel.

Moreover, the passenger service now is neither regular nor dependable, as the rundown vessels may break down anytime halfway. The steamers are in poor condition with patchy maintenance and recurrent repair.

Any vessel bound for Khulna now has to take a 60-km detour through the Sundarbans to get to Mongla. But the environmental groups are against operations of motorised vessels through the world's largest mangrove forests.

Presently, they have six-days-a-week service from Dhaka to Morelganj with four paddle steamers including PS Ostrich, PS Mahshud, PS Lepcha and PS Tern. Ostrich and Mahshud can carry 850 passengers each while the rest two can carry around 600 each.

As a result, the hand-to-mouth service schedule faces further constriction, according to south-bound riverine commuters.

Md. Mosharraf Hossain Howlader, general manager, BIWTC says that they provide replacement with a smaller vessel if Ostrich is withdrawn. But, he said, they try not to spare the Ostrich always.

Despite high demand and popularity of steamers, the service has always been a losing concern for the corporation. This is due to low passenger fare and high operational and maintenance costs, adds Mosharraf. As to why they do not raise the fare, he said that government considers it a 'public service' and therefore does not increase the fare.

The private passenger vessels owners on the other hand, though in an unregulated manner, have remarkably thrived over past two to three decades with expansion, modernisation and increase in number of vessels.

BIWTC chairman Mojibor Rahman, said that efforts were on to address the anomalies and resource wastes to revive the corporation's old glory.

Two large size passenger vessels are to be added soon to the inland fleet at a cost of Tk 510 million. The vessels are now being built at Western Marine dockyard.

The new vessels would have a carrying capacity of around 1,000 passengers.

Passenger services by private operators
Around 110 private launches operate between the capital and various southern districts daily while the total number of launches operating in the country is nearly 500, according to Bangladesh Inland Water Ways Passenger Carriers Association.

Around 30,000 passengers travel from the capital everyday while the total capacity of the launches is many time higher. Lack of navigability causes under-performance of the vessels and wastage of fuel and time.

River way routes
The country has nearly 24,000 km of rivers, streams and canals together constituting about 7% of the country's total surface areas and they link most part of the country by a complex network of waterways.

Of it, only 6000 km are for mechanised vessels during monsoon, while it shrinks to about 3,800 km during dry season.

The inland waterways still carries over 50% of all arterial freights and one quarter of passenger traffic, according to official estimates.

Causes of navigability loss
Tree felling, deforestation, drastic change in land use pattern, commercialisation and above all environmental degradation have resulted in massive siltation in the age-old rivers with population explosion during post-independent Bangladesh, say river experts.

Massive erosion of soil exposed to weather occurred during the period. As a result, rainwater runoff over the exposed land increased many times, on the one hand while rivers faced sloppy maintenance on the other.

It raised the river bed. With reduction in depth, the river current got sluggish and increased the sediment deposition rate. Strong currents carry the sediment and flush out to the confluence and the sea.

Dredging scenario
The river ways channels have lost navigability due to lack of regular capital dredging and maintenance dredging for long, according to Bangladesh Inland Water Ways Passenger Carriers' Association.

The circular waterway along the rivers Buriganga, Turag, Balu and Shitalakhhya, gifts of nature, could, substantially ease up the perennial traffic congestion on the capital's surface roads if utilised in a planned manner.

But the route has been made meaningless with a dozen of low-height bridges all built by government agencies in defiance of river-related rules.

One single example may elucidate the dilapidated state the inland water transport has been left to over past three and a half decades.

The last time that a dredger was procured for BIWTA was in 1975. After nearly four decades, three dredgers were procured and inducted in 2011 into the existing fleet of seven, most of which are rundown.

Bangladesh Transport Studies (BTS) done in 1973 recommended a long-term plan for investment in the transport sector with emphasis on the railway and inland waterways as sustainable modes.

Over the consecutive four five-year plans during 1980 to 2002, resource allocation to water and rail sub-sectors had gone consistently down.

By the year 2005, allocation to waterways fell to 1.5 percent of transport sector while that for roads soared to 72 percent.

The writer is a Senior Staff Reporter, The Daily Star.