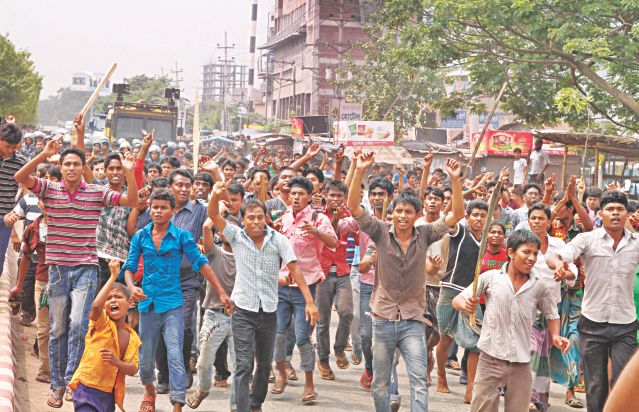 Garment workers demonstrate with sticks in their hands at Genda in Savar area on the outskirts of the capital yesterday demanding trial of those responsible for the death of labourers in Rana Plaza building collapse in the area on Wednesday. Photo: Star

RMG workers yesterday went on the rampage at four different places across the country following the deaths of fellow workers in Savar building collapse.
The angry protesters clashed with police, torched and vandalised vehicles, and put blockades on roads in Savar, Dhaka, Gazipur and Chittagong.
They also damaged various factories and shops, demanding punishment to the owner of Rana Plaza and the owners of RMG units housed in that ill-fated building which collapsed on April 24.
In Savar, at least 20 garment workers were injured as the agitating workers were locked into clashes with police on Dhaka-Aricha highway at Ulail and Phulbari.
They vandalised at least 10 vehicles, halting vehicular movement in the areas for more than three hours from 9:00am.
Witnesses said the apparel workers damaged vehicles, roadside factories and shops, and hurled brick chips at the police as the law enforcers tried to free the road at Ulail.
Police fired rubber bullets and teargas canisters, and charged batons to bring the situation under control, leaving three workers bullet-hit.
In Gazipur, the RMG workers vandalised six textile factories at Shreepur upazila.
Those factories were running yesterday morning defying the garment factory owners' decision to keep the factories shut on Saturday and Sunday.
The protesters attacked CRC Textile Mill on Shreepur-Mawna road at Vangnahati around 10:30am, damaging the windowpanes of the factory.
The agitators also hurled brick chips at the building, injuring at least eight workers of the factory.
Hundreds of agitating garment workers blockaded a road in the capital's Mirpur, disrupting vehicular movement on the adjacent thoroughfares.
In Chittagong, the RMG workers blocked the Chittagong-Rangamati highway at Oxygen intersection for one hour, and the city's Airport Road for more than two hours.
They also torched three covered vans of Star Ship and vandalised six vehicles in Nasirabad Industrial area.
The RMG workers from Karnaphuli Export Processing Zone blockaded the Airport Road at the CEPZ intersection, creating long tailbacks on both sides of the road at Cement Crossing intersection and Salt Gola Intersection.
They withdrew barricade around 11:00am, said Zahedul Islam, OC of Bandar Police Station.