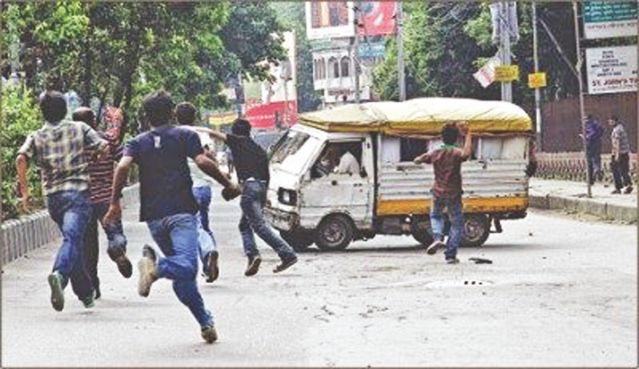 Terrorism has become a threat to peaceful political order and stability for many countries of the world. The attacks on World Trade Centre on 9/11 literally changed the entire world- President Bush declaring “war on terror”, and rhetoric such as “either you are with us or against us” divided the entire world. The period after 2001 witnessed wars in Afghanistan and Iraq. Whether these wars have improved the security situation and made the world a safer place or not, is a debatable issue. Understandably, western nations frantically embarked into the search for terrorists across the world.
While the western nations were hunting terrorists and disrupting terror links within and outside their own countries, Bangladesh came face to face with terrorism. Terrorism in Bangladesh is an internationally linked phenomenon. For Bangladesh, its history, geostrategic location, religious diversity, weak infrastructure, socio-economic conditions and demographic factors are responsible for the rise of extremist views and terrorism. The transnational form of the menace is a challenge for any developing nation like Bangladesh. Moreover, global agenda of different Islamic groups, growing presence of international financial institutions in the country, globalisation, growth of Information and Communication Technology, limitations in monitoring capacities of different government agencies and weak political institutions have accentuated the threat of terrorism. Since 1999, some terrorist groups have used violence in the name of religion. These groups have also developed a nexus with smuggling syndicates, gangsters, international terrorists, outlawed groups and remnants of defunct terrorist groups, benefiting from each other despite their differing aims and goals. 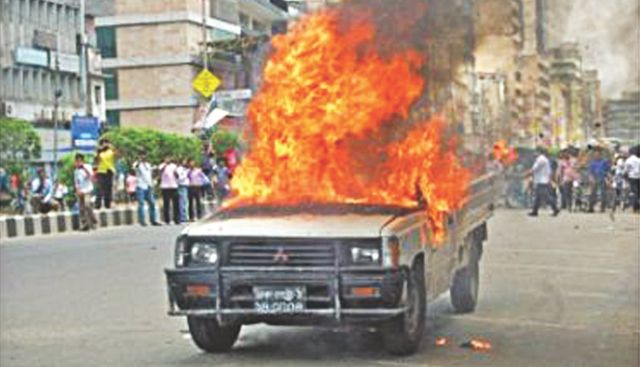 Countrywide bomb explosions in Bangladesh on 17 August 2005 perpetrated by Jamat-ul-Mujahideen Bangladesh (JMB) shook the entire country. Although the damage was relatively small the incident demonstrated the reach, strength and capability of the group to orchestrate and conduct sabotage activities throughout the country. It was a wakeup call for the law enforcement agencies (LEAs) and a signal for the government that religion based terrorists is a threat for the peace and stability of the country. There have been other terrorist attacks in the country before that -- bomb blast in front ofUdichi Office in Netrokona, suicide bomb attacks by the JMB on Chittagong and Gazipur court premises, suicide bomb attack at Jhalakathi, several bomb attacks on the then leader of the opposition and Awami League Leader (present Prime Minister) Sheikh Hasina.
The present government has adopted zero-tolerance towards terrorism and has denied the use of its territory for any terrorist groups for perpetrating terrorist activities either inside or outside the country. The government has enacted the Anti-Terrorism Act 2012 and Anti-money Laundering Act 2012 and has, so far, proscribed five terrorist outfits- JMB, Hizb-ut-Tahrir(HT), Harkat-ul-Jihad, Bangladesh (HUJI-B), Jagrata Muslim Janata, Bangladesh (JMJB) and Shahadat-e-al-Hikma. Although, these religious groups have not carried out any terrorist activities since 2007, JMB continues to maintain its organizational activities. 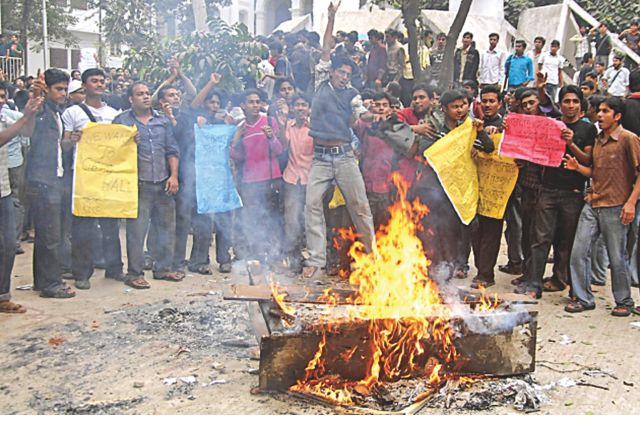 Of all the proscribed groups, HT appears to grow in strength and have continued its organisational activities of recruitment, demonstration and distribution of leaflets, CDs and posters despite the strong actions of the LEAs. The HT was launched in November 2001 in Bangladesh, and is gradually becoming a growing concern. Although it propagates non-violent means the actions of the group members on different occasions indicate otherwise. Some experts in the US say that the HT acts as a “conveyer belt” for young Muslims, using its legal status to indoctrinate them before they leave the group to join more extreme groups that may engage in violence. The group's publications, leaflets, CDs and posters propagate and express views challenging the policies and actions of the existing government. The group makes subtle and intelligent use of the internet and social media to publish its narratives targeting the youth.
Although, the LEAs are tough on the members of HT, this may not be enough to tackle the group in the long run. This is so, since its membership reach has already penetrated into the public and private universities and colleges targeting the intelligent, talented and middle-class young students. HT believes that impact on human mind is  important for any change to happen.
Now, where does Bangladesh stand in the terrorism scenario? This is a difficult question to answer. Often, some quarters mix up criminal activities with that of terrorist ones and try to project a grim picture in different forums. While the country faces numerous challenges to maintain law and order, the terrorism scenario in the country is not so bad.
Bangladesh has been cited as a success story in addressing the menace of terrorism, in many world forums. In the Global Terrorism Index Report 2011, released by Australia-based Institute for Economics & Peace, Bangladesh is ranked 39 (lower ranking indicates higher impact of terrorism). Taking into account factors like number of terrorist incidents, fatalities, injuries and property damage, the index scores 158 countries over the last 10 years. Bangladesh is in a much better position than any other country in the region like Pakistan (2), Afghanistan (3), India (4), Sri Lanka (16), Nepal (22) and Myanmar (33).

Despite all the successes, there remain numerous challenges in the fight against terrorism in Bangladesh. There is a potential threat-the post 9/11 phenomenon of self-radicalization where individuals become radicalized at their own. This is one of the reasons that HT continues to follow the strategy of propagating their ideologies and messages through internet, social websites, blogs, CDs, fliers, posters and so on. Again, there is terrorist financing of different groups through multiple sources, both from inside and out. The financing sources include crop donations (a form of taxation in the rural areas), Hundis / Hawalas, donations for charity, money earned through counterfeit currency and funds received by some NGOs. Following illegal money is a challenging and arduous task and the LEAs, so far, have been facing many hurdles in doing it. But entry of Bangladesh into the Egmont Group, an international network of Financial Intelligence Units with 117 member countries, would reduce lot of hurdles in this field.
Although the US has brought many terrorists to justice, detained many more, bombed the remotest areas of Afghanistan, invaded Iraq and carried out drone attacks inside Pakistan, yet it has not been able to stem terrorist attacks. The question is- hasthe war on terror done any good? At present, what is the face of terrorism around the world?
In the global perspective, the issues that are going to engage the terrorism arena are self-radicalization of vulnerable groups and individuals, displacement and movement of terrorists across countries and regions, continued and likely escalation of terrorism and insurgency in Iraq and Afghanistan, and sectarian violence in these countries and also in Yemen and Somalia.  For Bangladesh, the growing number of self-radicalized youths would be a major concern in the coming days.
Arundhati Roy in her book, The Algebra of Infinite Justice writes, “Terrorism is the symptom, not the disease. Terrorism has no country. It's transnational, as global an enterprise as Coke or Pepsi or Nike. At the first sign of trouble, terrorists can pull up stakes and move their “factories” from country to country in search of a better deal. Just like the multi-nationals.
The situation in Bangladesh is unique and in combating terrorist groups and networks it has dealt with the problem in its own style that is best suited to her dynamics despite the prescription of other countries to do it differently. And this has proved to be effective and successful. In the past, top leaders of JMB was put through speedy trial and executed. Stern actions have led to weakening of JMB to the extent that it no longer poses a credible threat. However, the HT continues to carry out its organisational activities-recruitment, networking, training, preaching of ideology and fund raising despite the actions by the LEAs.
What response should the government then make in the present circumstances? The government should adopt both hard and soft approaches. The hard approach of arrests, prosecution and proscription should continue. On the other hand, the soft approach -- general awareness of the people against the warped ideologies being preached, counter narratives, economic development and strengthening the institutions of the government should receive attention. At the moment, the hard approach of the government appears more pronounced than the soft. Much more is to be done in the domain of the soft approach, which is naturally slow to take effect, long lasting but more difficult to achieve. John L. Esposito says, “Critical to the fight against global terrorism is an ability to move beyond presuppositions and stereotypes in our attitudes and policies and to form partnerships that transcend an “us” and “them” view of the world.”
The trends, pattern and overall threat of terrorism in Bangladesh is new. It is difficult for any single government agency to address the problem alone, for it is a fight that needs the involvement of all. Therefore, a coordinated and collaborative approach is the solution. Its transnational nature demands cooperation with other countries since it is a fight that needs a global effort too. Bangladesh is a country of moderate Muslims and Islam plays a major role in the lives of the people. Therefore, any group propagating an extremist view is going to face opposition since the general people is secular.
In Bangladesh, the most encouraging part is the awareness created amongst the general population against terrorism and the wrong ideologies that they preach. Thus, it is encouraging findingthe general mass protesting and arresting activists of different groups who preach wrong ideologies in public places. The recent protests throughout the country against the verdict of a convict of war crimes charges, and the activities of a religion based political party, is yet another manifestation of the secular nature of Bangladeshis. Bangladesh is a success story in fighting terrorism and shecontinues to inspire other nations who are still struggling to fight this menace in their own land.

The writer is a security and Defence Analyst.