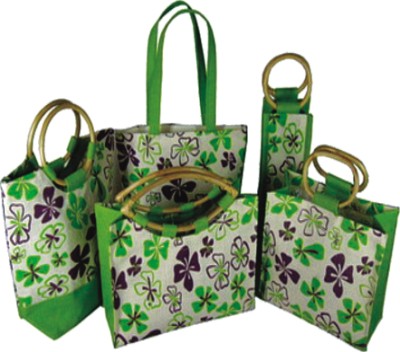 Eco-concerns drive demand for biodegradable bags on the global market, giving rise to the exports of shopping jute bags from Bangladesh.
Jute goods makers export around 100,000 shopping bags a month on average to different countries. They hope scope for more shipments will widen next year, as some European countries are set to ban polythene bags in 2010.
"In our products line, shopping jute bags are the most popular among importers as European and American consumers are opting for environment-friendly bags which can be used repeatedly," said Milton Suranjit Ratna, a senior officer of Corr-The Jute Works, the handicraft marketing and exporting trust of Caritas Bangladesh.
Corr-The Jute Works exported over 600,000 jute bags in 2008 mainly to Germany, the Netherlands, Sweden, UK, USA, Canada, Japan, Switzerland, South Korea, and France.
Creation Private Limited, a jute goods maker, exports around 50,000 shopping bags to those destinations a month.
Two years ago, the number of jute bags exported by Bangladesh would not exceed 100,000 annually, said the sector people.
A global initiative for banning environment-unfriendly shopping bags and declaring the year 2009 by the United Nations as International Year of Natural Fibres has fuelled demand for jute bags.
According to media reports, France and Germany will ban the use of non-biodegradable polythene bags next year. Also, the US is looking for a viable alternative to polythene bags.
San Francisco has completely banned plastic bags. Los Angeles will do so in 2010. Also, Washington, D.C.'s city council is set to vote on a five-cent-a-bag tax later this month.
Now the United States uses an estimated 90 billion thin bags a year, with most used to handle produce and groceries.
Achim Steiner, executive director of the UN Environment Programme, has recently called for a ban on polythene bags and said: "Single-use plastic bags which choke marine life should be banned or phased out rapidly everywhere. There is simply zero justification for manufacturing them anymore, anywhere."
The global context has made a multi-billion dollar global shopping bag market, opening up a huge opportunity for the country's golden fibre.
On the potential of jute bag exports from Bangladesh, the sector people viewed that non-perishable polythene bags will go out of market in the years to come, driving demand for Bangladeshi jute bags.
On the other hand, more and more chain shops around the world are phasing out the use of polythene bags in their shops and using bio-friendly natural fibre bags instead.
Ratna said only the UK-based retail chain Tesco requires around 1 million shopping bags -- made of natural fibre -- a month that it now buys from India.
"Tesco had approached us to buy bags but we could not take their order as our bags were costlier than in India," said Rashidul Karim Munna, managing director of Creation Private Limited.
Munna said local bag makers buy jute fabric from the domestic market at higher prices than what foreign importers pay for the same fabric from Bangladesh -- a setback that makes the local industry less competitive than its rival in India, the main importer of jute fabric.
"When we buy jute fabric, the jute mills add the money of export incentive to the cost of fabric as they don't get any incentive when they sell to us," Munna said.
"Unlike in India, jute bag makers in Bangladesh do not get export incentive," he said.
"It is very sad that even after buying raw materials from Bangladesh, India can sell shopping bags at lower prices," he said. A shopping bag sells at $1.
Despite having all the difficulties, however, increasing orders are pushing bag manufacturers to expand their capacity.
"Due to the increased demand we will set up a new bag manufacturing unit in Tongi, which will go into operation next month," said Bertha Gity Baroi, acting director of Corr-The Jute Works.
The sector people believe Bangladesh has every chance to strengthen its foothold in the billion-dollar shopping bag market.
"We could easily double our production and exports if we got proper government support," an official of Corr-The Jute Works which has long been reputed for exporting handicraft products.
kawsar@thedailystar.net