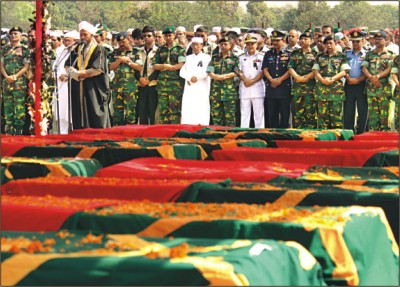 The namaz-e-janaza of 50 victims of the BDR headquarters massacre being held at the National Parade Square yesterday.Photo: Syed Zakir Hossain

After reviewing information about how many army officers were in fact inside the BDR headquarters during the last week's bloody carnage, the army authorities yesterday revised the number of missing officers down to six from the previous 72.
According to sources, the army could not get its facts straight because of chaos and confusion in the aftermath of the massacre and hostage situation on Wednesday and Thursday.
At a press briefing Saturday, the Military Intelligence (MI) director said 72 army officers deputed to BDR had been unaccounted for since the mutiny broke out.
However, Chief of General Staff Lieutenant General Sina Ibn Jamali last night said 56 bodies have been recovered so far.
Of those, 53 are of army officers' and the rest belong to retired Colonel Delwar and his wife and the slain BDR chief Major General Shakil Ahmed's wife Naznin Shakil.
Briefing journalists in the army headquarters, he said 40 officers have been rescued, and seven are still missing.
About the figures provided by MI earlier, he said, “Those were based on assumptions while the numbers we are giving now are grounded in facts.”
Late at night, an army source told this correspondent that they had mistakenly included among the missing ones an officer whose body was already sent to his village home.
Other sources said 101/102 officers were at Pilkhana when disgruntled border troops seized control of the compound.
They said it might take some more time to come up with an exact and accurate number of the army officers who attended the Darbar and also break-ups like how many of them have died and how many have come out alive.
They said initially there was confusion over the figures as almost all bodies retrieved were in BDR uniforms, and the authorities took many BDR personnel for army officers.
Morgue sources said there are now seven unidentified bodies, two of those being civilians', in Dhaka Medical College and Mitford morgues.
The army officers whose whereabouts still remain unanswered include Colonel Gulzaruddin Ahmed, widely praised for his role in anti-militant campaign.
The others are Lieutenant Colonel Elahi Manzoor Chowdhury, Major Ahmed Azizul Hakim, Major Kazi Ashraf Hossain, Major Abu Syed Dastagir and Captain Tanvir Haider Noor, said sources.
Civilian fatalities in the butchery that ended Thursday evening stand at five and the number of BDR personnel killed in the revolt is eight.
Rescuers yesterday drew a blank in their search for the missing ones in and around Pilkhana. They also did not find any new place that might have corpses buried or dumped.
“One possibility is that a few officers might have been taken hostage by the mutineers fleeing the scene. Besides, there's a chance that bodies dumped in the sewers have drifted far along the Buriganga,” said a source.
Meanwhile, new Director General of Bangladesh Rifles (BDR) Brigadier General Md Mainul Islam told The Daily Star yesterday, “BDR is now carrying out duties at all border outposts. We have restored communications between the headquarters and the battalions.”
At an assembly of army men at Senakunja in Dhaka cantonment Sunday, many officers requested Prime Minister Sheikh Hasina to disband the paramilitary force and reconstitute it under a new name like Bangladesh Border Guards. The PM agreed to the idea in principle.
Sources said the government yesterday began the process of reorganising the border troops. Operational responsibilities of the paramilitaries would soon be re-delineated.
“The prime minister herself will announce the new name for the border force as well as some other changes,” said a source.
In the wake of the mutiny, a good number of army officers in charge of BDR battalions had left their outposts on security concerns.
Lately, some of them have joined work while some, who still do not feel comfortable with the situation, are staying in contact with the headquarters from outside.
The rescuers have recovered a large number of grenades, pistols and ammunition from inside the BDR compound. They will continue combing the area for weapons.
A source said, “It's not possible to determine the volume of arms and ammunition used on Wednesday and Thursday till we finish collecting those outside the armoury.
“All records on the Pilkhana armoury have been damaged. The persons who could give concrete information about the arms and ammunition are not available or missing.”
Some rescuers suspect that some mutineers might have taken small arms and grenades along with them. Boxes of brand new arms that were yet to be assigned to any officers or troops were found open in the armoury and many of them are missing.
The vital documents being searched for include the laptop of Shakil Ahmed.
Meanwhile, the “Operation Rebel Hunt” to be led by police with assistance from the army was not launched yesterday as announced. The authorities have asked the army personnel to mobilise at circuit houses and DC offices across the country.