Retelling the tale of Dhakeshwari Mandir, the 'oldest' in Dhaka
Shahnaz Parveen 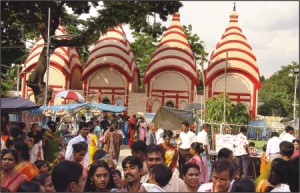 It was a lazy afternoon on a weekday at the Dhakeshwari Mandir (temple). The priests were preparing for the final puja (worship) of the day set to begin right after sundown. The puja thali (offerings) was garnished with fresh fruits, sweets, a little bowl of milk, fresh flowers, rice, green grass, the elements considered as the symbol of earthly life.
As darkness descends, the priest lit dhoop (incense) and five lamps to drive away the bad omen around followed by evening Arati, praising the goddess with hymns from Geeta. After the evening Arati and offerings of the thali the devi is set to rest for the night.
Dhakeshwari, popularly known as Durga is considered the 'goddess of Dhaka' who looks after the well-being of the people residing in the neighbourhood.
The temple, established to venerate the goddess of Dhaka, is the centre of all festivities and the most important place of worship for the believers of Hinduism in Bangladesh.
On entering the temple premises through the ornate archway, anyone would feel the strong presence of spiritual serenity reigning over.
Dhakeshwari Temple is a complex of several temples. Inside the main temple stands the ten-armed goddess Durga with her four children and the demon Mahishashur. There are two Shivalinga on a marble altar and an idol of lord Visnu.
The main temple is a three-room structure with domes and curved archways.
In front of the main temple stands the Naat Mandir for Kirtan (religious chants) and other gatherings. The Panthashala, the rest house is located beside the Naat Mandir. There is an altar of animal sacrifice (boli) there. Adjacent to it is the Bhoger Ghar (place of nourishment)
On the left side of the well-groomed courtyard is the famous pond where holy men used to meditate. Some of them are even buried here. Their tombs are still inside the main temple premises. There are four Shivalinga temples with narrow arched openings.
It is widely believed that Dhakeswari Temple is the oldest temple in Dhaka and at present it is recognised as the 'national temple'.
The origin of the Dhakeshwari Temple is however shrouded in mystery. The exact time and date of its founding still cannot be known. According to the most popular legend, the 12-century king Ballal Sen once dreamt that the goddess Durga was left unattended buried in the ground. The king sent his men, cleared away the bush, unearthed the goddess and established the temple for her veneration.
According to another popular story, King Bijoy Sen once went to Langalbandh for a bath. On his way back home, his wife gave birth to their son Ballal Sen. After becoming the king, Ballal Sen established the Dhakeswari Temple to mark his birthplace.
However, researchers argue that the style of architecture of the temple cannot be dated to that period. Nevertheless, the temple is considered an essential part of Dhaka's heritage.
Pradip Kumar Chakrabarty, Shebait (chief custodian) of the temple said, “A festive mood always persists in the temple as all the 13 main pujas of the Hindus are celebrated here and the temple welcomes people belonging to every religion, caste or creed.”
The custodian explains the daily events at the temple. Goddess Durga receives three puja offerings every day, one in the morning, one at noon and finally in the evening.
On weekdays the temple receives a thin crowd. But on Fridays and Saturdays the temple ground bustles with devotees. During big puja festivals the temple sees a huge crowd.
Devotees are allowed to perform various ceremonies at the temple ground, including weddings and Sraddho or the ritual for the dead.
Another major event celebrated here is Janmashtomi, the birthday of lord Krishna with a grand rally starting from the temple.
Pradip Kumar said though it is considered as the national temple the government does not provide any monetary support for it. The temple runs with donations from the devotees.
The temple is located on around 3 acres of land, which was originally more than 7 acres. “Majority of its land was gradually encroached by many parties. The temple lost many of its glory due to vandalism during the Liberation War and during the incident of Babri Mosque demolition in 1992,” he lamented.
“The temple also lost many of its original architectural characteristics as it has undergone repairs, renovation and rebuilding in its long years of existence,” Pradip said.