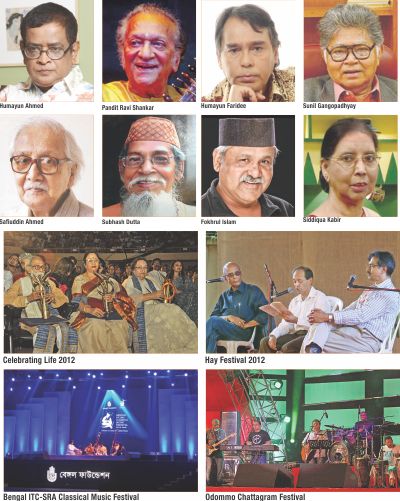 12th Dhaka Int'l Film Fest
Both the Bangladeshi entries -- â€œGuerrillaâ€ and â€œMoner Manushâ€ -- bagged awards and Turkish filmmaker Sinan Cetin received the Best Director Award for his comedy-drama â€œKagitâ€ (Paper) at the 12th Dhaka International Film Festival 2012, held from January 12 to 20. Iconic Iranian filmmaker Dariush Mehrjui was the â€œpersonality of the festâ€. A retrospective screening of his selected films was one of main attractions.

Bangladeshis shine at ADFEST 2012
Adfest is Asia Pacific's largest annual regional advertising festival celebrating and raising the standard of creativity in the region. The 15th Asia Pacific Advertising Festival, better known as ADFEST 2012, was held in Pattaya, Thailand during March 18-20, 2012. ADFEST 2012 received 24 short film scripts, including five scripts from Dhaka. Of the selected 'Fabulous Four' scripts, two were from Bangladesh.

Dhaka Theatre's â€œTempestâ€ at Global Shakespeare Fest
Dhaka Theatre adapted William Shakespeare's â€œThe Tempestâ€ in a Manipuri form and staged the production in London, UK on May 7 and 8 as part of Global Shakespeare Festival 2012. Nasiruddin Yousuff directed the play, translated by Rubaiyat Ahmed. Apart from regular members of Dhaka Theatre, the play featured guest artistes Rubol Noor Lodi (as Prospero) and two Manipuri artistes -- Nilmoni Sinha and Bidhan Sinha. The festival marked the Cultural Olympiad, on the occasion of the 2012 Summer Olympics in London. The Cultural Olympiad featured 37 Shakespeare plays in 37 languages.

Celebrating Life Shadhinota Concert
Featuring some of the most renowned musicians of the country as well as an ensemble from Kolkata (India), the Celebrating Life Shadhinota Concert was held on March 31 at the Suhrawardi Udyan in Dhaka. The Daily Star, in association with Standard Chartered Bank Bangladesh, hosted the event that also marked the 41st anniversary of Bangladesh's independence. Popular Adhunik singers, rock artistes and celebrated cultural personalities took part in the concert. A group of contestants from the Celebrating Life competition also performed at the event. Indian musician Debajyoti Mishra, with his 24-member ensemble, performed for the Dhaka audience.

Siddiqua Kabir no more
She modernised the art of Bangladeshi cooking. â€œRanna Khadyo Pushtiâ€, written by her, is considered a culinary bible by all Bangladeshis who can read. Noted nutritionist and culinary expert Professor Siddiqua Kabir passed away on January 31, 2012. She was 80. She had been involved with cooking shows on television since 1965.

Odommo Chattagram celebrates the spirit of Port City
As a tribute to the glorious past and indomitable spirit of Chittagong, the 12-daylong The Daily Star Odommo Chattagram (Indomitable Chittagong) Festival opened on March 30 in the Port City. The 103-year-old living legend Binod Bihari Chowdhury, who with his comrade Masterda Surja Sen set off the anti-British movement in this part of the subcontinent, inaugurated the festival. Editor and publisher of The Daily Star, Mahfuz Anam, along with distinguished personalities of Chittagong pledged at MA Aziz Stadium to develop the Port City with a view to ensuring the development of the country.

Artist Fokhrul Islam no more
Noted artist Mohammad Fokhrul Islam passed away on April 6 at Ibrahim General Hospital, Dhanmondi in Dhaka. He was 48. He had been ailing from diabetes related complications. Fokhrul started off as a ceramic artist in the early 1990s, but decided to switch to painting in the mid 1990s. Since then, his voyage through paintings where he depicted a spiritual and contemplative world, had been concerned with uninhabited landscapes.

Dr. Sanjida Khatun receives Desikottam award
Visva-Bharati University conferred its highest honour Desikottam on Rabindra Sangeet exponent and one of the founders of Chhayanaut, Dr. Sanjida Khatun, at Shantiniketan, India on April 27. The award was conferred at the convocation of the university by Paschimbanga Governor MK Narayanan as chief guest. Among others, noted actor Soumitra Chatterjee and Visva-Bharati Vice-Chancellor Sushanta Datta Gupta were present at the ceremony.

Safiuddin Ahmed passes away
Eminent painter and printmaker Safiuddin Ahmed passed away at Square Hospital in Dhaka on May 20. He was 90. He had been suffering from old age complications. The artist left behind his wife, two sons, one daughter and a host of relatives and admirers to mourn his death.

Humayun Ahmed passes away
Popular writer Humayun Ahmed passed away while undergoing treatment for cancer at a New York hospital on July 19. A pall of gloom descended soon after the news streamed into the country. A former associate professor of the Chemistry Department of Dhaka University, Ahmed came into prominence after the publication of his first novel, â€œNondito Norokeâ€, in 1974. He was an author, dramatist, screenwriter, playwright and filmmaker. As a writer, Ahmed often displayed a fascination for creating stories around supernatural events; his style was characterised as magic realism. He is regarded as the most popular writer in the Bengali language for a century and according to many, he was even more popular than Sarat Chandra Chattopadhyay.

Farooki beams into Busan with â€œTelevisionâ€
As Mostofa Sarwar Farooki's film â€œTelevisionâ€ brought down the curtain on Asia's biggest film festival in Busan, South Korea on October 13, the movie set off a big buzz internationally. Busan International Film Festival director Lee Yong-kwan said that â€œTelevisionâ€ was an easy choice as the closing film. â€œIt was first of all very entertaining as a movie, in both its subject matter and storytelling. It was selected by not only BIFF but also representative experts from around Asia for the Asian Cinema Fund, for a reason,â€ he said. â€œA new trend can be industry-related or artistic, and the fact that a country is creating domestic films through telecinema is monumental. BIFF felt compelled to showcase this movement.â€

Goya exhibition in Dhaka
Bengal Gallery of Fine Arts, the Spanish Embassy in Bangladesh and the Inditex Chair of Spanish Language and Culture, University of Dhaka, jointly organised the first exhibition of Francisco Goya's artworks in Bangladesh, starting from October 9. About 84 Goya prints were on display at Bengal Gallery of Fine Arts in Dhanmondi, Dhaka. The collection included works ranging from his first etchings, through which Goya mastered this difficult technique.

Bangladeshi film opens 'Dok Leipzigâ€™
â€œShunte Ki Pao!â€ (Are You Listening!), a documentary by Kamar Ahmad Simon, opened one of the oldest documentary festivals, Dok Leipzig, in Germany. The film was also nominated (among 12 films from all over the world) for the festival's 'International Documentary Competition'. The weeklong festival began on October 29. â€œShunte Ki Pao!â€ zooms in on a small village near the Sundarbans. It was the first film from Bangladesh invited to the 'Editing Lab' of 'Campus Studio' at Berlinale 2012.

Celebrating Life 2012
The Daily Star held the Celebrating Life competition for the fifth year in 2012, with the theme 'Celebrating the Youth in Bangladesh'. The gala event, held at Shaheed Suhrawardy Indoor Stadium at Mirpur, Dhaka on November 2, awarded young and gifted filmmakers, lyricists and photographers who sent in their submission on the theme. Celebrating Life also honoured four icons by presenting them Lifetime Achievement Awards: Firoza Begum for her contribution to Nazrul Sangeet and modern Bangla songs; Abdur Razzak in films; Amanul Haque in photography, and Ferdausi Rahman in playback and Bhawaiya songs. The event also featured classical music maestro Pandit Ajoy Chakrabarty along with his daughter Kaushiki Desikan in their first-ever duet performance in Bangladesh. Noted Bangladeshi singer Sabina Yasmin also performed at the grand event.

â€œGhetu Putro Kamolaâ€ at Golden Globe Awards
A special screening of Humayun Ahmed's last film â€œGhetu Putro Kamolaâ€ was held at the Beverly Hills Wilshire Auditorium in Los Angeles, USA on November 10. The screening was part of the 70th Golden Globe Awards that will take place in January next year. This was the first Bangladeshi production to be part of the prestigious ceremony, which along with the Academy Awards culminates the US film industry's awards season.

12th International Short and Independent Film Festival in Dhaka
The 12th International Short and Independent Film Festival began at the Central Public Library in Shahbagh, Dhaka on December 13. Featuring over 200 films from around 30 countries, the weeklong festival was a platform for young filmmakers who want to see themselves in global film competitions and want to take cinema ahead. Bangladesh Short Film Forum (BSFF) has been arranging the festival biennially since 1988. It is one of the oldest film festivals in the country.

Pandit Ravi Shankar passes away
Indian sitar maestro Pandit Ravi Shankar died on December 13 in San Diego of United States. He was 92. In many ways the maestro launched Indian classical music at the world stage and showed the world, indeed many in India as well, its sheer power. He re-wrote the rules of Indian classical performances and took it beyond its traditional and limited boundaries. Pandit Ravi Shankar was a humanist with a deep sense of concern for the oppressed and deprived. He, along with Ustad Alla Rakha, performed at the Concert for Bangladesh in Madison Square Garden, New York City in 1971 and was one of the key movers, along with George Harrison, of this landmark concert.

Sohrab Hossain passes away
Eminent Nazrul Sangeet exponent Sohrab Hossain breathed his last at Square Hospital in the capital on December 27. He was 91. Hossain was born in Ayeshtola village, near Ranaghat of Nadia district, West Bengal, India on April 9, 1922. The artiste and guru earned accolades and medals for his single-minded dedication to preserving and performing Nazrul's songs. He was honoured with the Swadhinata Puroshkar by the Bangladesh government in 1980.