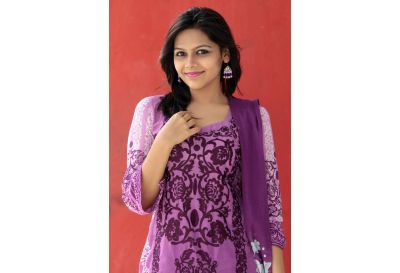 Samia Said is the latest addition to a long list of Lux beauties, such as Momo, Bidya Sinha Meem, Mehzabien, Shanarei Debi Shanu and Rakhi. The recently crowned 'Lux Channel i Superstar' Samia is a student of Economics at the North South University. Samia is ecstatic about her achievements and now looks forward to cementing her place in the media.
Talking to The Daily Star, Samia says that she is yet to recover from the thrill of winning the title. “Although I'm yet to feel like a superstar, I'm enjoying the flood of greetings from all around,” Samia says, adding that sleeping is now her primary form of leisure.
Samia wishes to focus on acting in TV okays, but she is also open to working in films belonging to the alternative trends. The latest Lux beauty also wants to be a recognised face in both the domestic and international modeling arenas. However, her recent success is keeping her busy these days, with regular interviews and photo sessions at different dailies of the country. She has already received an offer to work in a TV commercial, while there are also plans to fly to Singapore next month to perform at an award programme.
During the competition, Samia had to stay at the camp and lead a disciplined life for grooming sessions. The separation from family caused woes, she says, but the struggles were worth it as she won a great chance to launch herself. Samia stayed three months at the camp, except for the month of Ramadan, which she spent with her family.
While the newfound stardom allows her to plan her future steps freely, Samia's main aim is to continue her studies diligently. Other plans include working hard to make a name for herself on TV. A Pisces, Samia has a strong dislike for cold winter days and loves the monsoon drizzle.
“The thing I hate the most is the traffic jam in Dhaka,” says Samia .
Terming herself as a restless person, the Lux star says that she does not like silence around her. She enjoys having fun times with her friends, going out to restaurants and feasting on fast food.
The latest Lux Channel i beauty was born in England, and has lots of experiences of travelling around the globe with her father -- a cargo ship captain.
Many talented faces fade away after winning a title, while others manage to shine. Samia plans to fall in the latter category. She wants to earn respect for her talents and carve a permanent niche in the media. Her favourite actress is Jaya Ahsan, while her favourite actor is Chanchal Chowdhury.